WINTER HAVEN, Fla. - The Polk County Sheriff's Office says their latest drug bust resulted in the largest seizure of fentanyl in the history of the agency.

Sheriff Grady Judd detailed the undercover trafficking operation, which ended with the arrests of three suspects and 11 pounds of fentanyl seized by detectives.

Investigators said the drugs were being manufactured in Mexico and sent to the United States to be made into synthetic pills and sold on the streets.

According to the sheriff's office, detectives received information that an international drug trafficking organization was trafficking fentanyl from Mexico to Bradenton and then into Polk County.

Investigators said undercover detectives arranged to purchase fentanyl from an unidentified source in Mexico at a price of $24,000 per kilo.

The local facilitator for the drug buy, a 28-year-old man from Bradenton, told the undercover detectives that the source in Mexico would only deal in large amounts, and said the price fluctuated based on the quality of the drug. 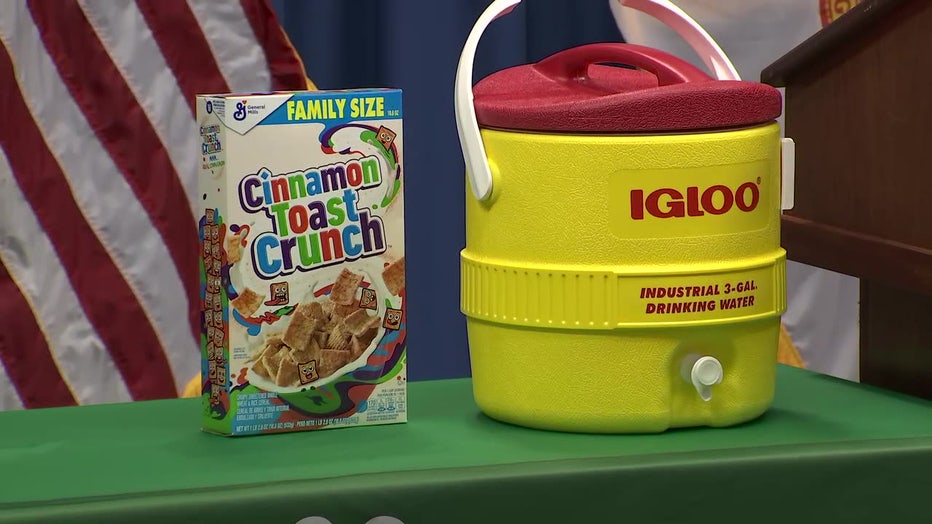 The cereal box and Igloo cooler used to conceal fentanyl during the undercover drug buy.

On Sept. 19, the detectives negotiated the purchase of $60,000 worth of fentanyl. The man showed up to the meeting with two kilos hidden in a Cinnamon Toast Crunch cereal box, and another three kilos concealed in a yellow Igloo cooler.

The man then warned the detectives to be careful or they might overdose.

"He recommended they wear a mask and gloves," the sheriff's office said, adding, "he suggested that they drink milk before ingesting the drug to help with feelings of tightness in their chests."

WATCH: Polk County deputy survives shot to the chest thanks to bulletproof vest

During the investigation, detectives identified two other suspects out of North Carolina, including a 29-year-old man who the sheriff's office said was in the country illegally.

According to the sheriff's office, the men drove from North Carolina to Polk County on Oct. 11 to meet with undercover detectives to discuss another large-scale sale of fentanyl, saying that he and the Mexico supplier wanted to establish a portion of their drug trafficking organization in Polk. Investigators said one of the men told detectives he was planning on moving to Polk County and would be responsible for handling operations for the Mexican cartels.

When detectives took the men into custody on Oct. 12, they reportedly told investigators they were being paid to collect money for the fentanyl dealer in Mexico.

All three men are charged with conspiracy to traffic fentanyl, with the Bradenton man facing additional charges for trafficking in fentanyl, possession of a vehicle for drug trafficking, possession of drug paraphernalia, and unlawful use of a two-way communication device.

"This poison is coming into the country across the border from Mexico, and we are going to continue our investigation into the Mexican drug cartels who are killing innocent people," Sheriff Grady Judd said in a statement.