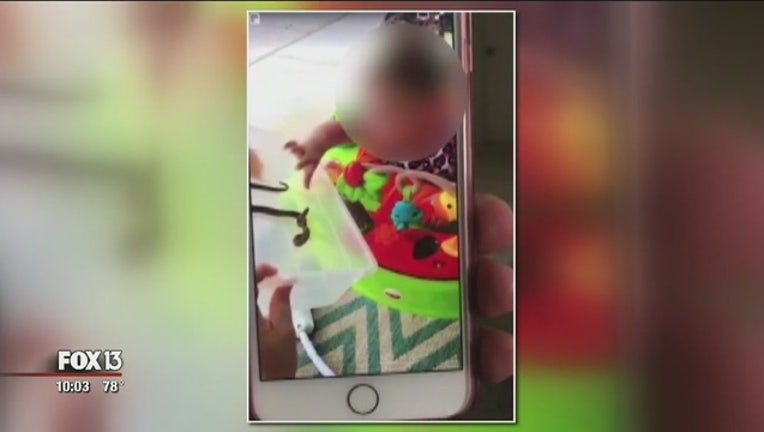 SEBRING (FOX 13) - The Highlands County mother, who hoped to teach her daughter a lesson by allowing a snake to bite the 1-year-old, will not face criminal charges.  The state Attorney’s Office said Tuesday they would not pursue a case against Chantelle St. Laurent.

Highlands deputies referred the case to prosecutors after reviewing video, which had been posted to Facebook, showing St. Laurent holding a snake to her daughter.  The footage showed her daughter reaching for it, and the snake striking, and the girl crying.

"She says she was just trying to teach the child to be afraid of snakes," said Scott Dressel of the Highlands County Sheriff's Office.

Tuesday, prosecutors explained there was not enough evidence to prove the case to the standard of beyond a reasonable doubt, which is required for prosecution.

"Our Special Victims Unit interviewed snake expert Greg Graziani, who also has over 20 years of law enforcement experience, about the video," Sheriff Paul Blackman said. "Graziani said he had shared the video with a colleague from the Florida Fish and Wildlife Conservation Commission, and while both felt that the treatment of the snake and the child were not wise, they did not see any criminal actions.”

Chartelle's mother talked to FOX 13 earlier this month from their ranch in Sebring, saying they have always lived around animals, and that she'd done that same exercise on Chartelle during her childhood.

"She regrets putting it on Facebook for all these morons," said Brenda St. Laurent. "But as far as teaching the child? No. And I don't regret her doing it either."

They said she purposely chose a non-poisonous snake and that the baby's skin wasn't broken.

"There was no harm to the baby," said St. Laurent. "The baby is fine, a happy, healthy baby."

Sheriff Blackman said he still hopes other parents learn from this case.

"While we all have a duty to teach our children, we should always think about the methods involved in that education and realize that some methods are just not appropriate, especially when the child is too young to understand the situation and comprehend the intended lesson," he added.