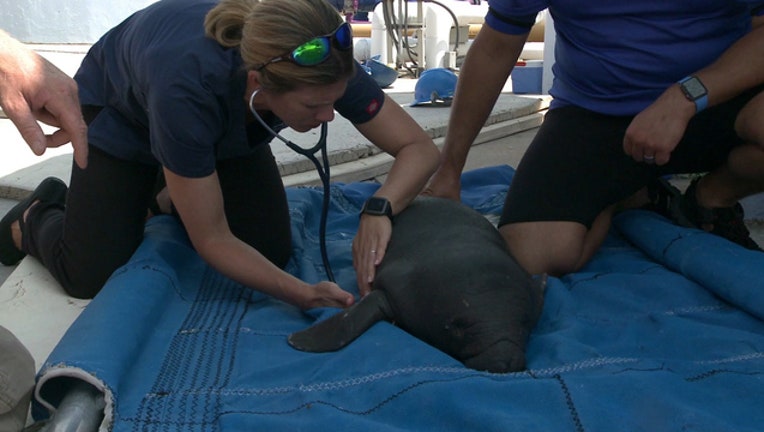 ORLANDO, Fla. (WOFL FOX 35) - As Florida continues to clean up in the wake of Hurricane Irma, it’s been a busy week for the SeaWorld Orlando Rescue team.

Reports of stranded, displaced and injured animals have increased, and the park’s rescue team, along with partner and government agencies, has been called to assist.

On Thursday, a manatee calf was found orphaned or abandoned in Southwest Florida, presumably as a result of Hurricane Irma.  Manatee calves and moms have tight bonds, and if a calf is seen without a mom around for several hours it's very likely that calf has been orphaned.  Since manatees nurse for 1-2 years, a calf on its own has very little chance of survival.

The Florida Fish & Wildlife Conservation Commission rescued the calf and transported it to SeaWorld Orlando.  Upon arrival at SeaWorld, the animal care team provided fluids to the calf as it was suffering from dehydration.

Beginning Friday morning, the calf was transitioned to a nutritional formula created by SeaWorld that replicates mother’s milk. An animal care specialist will give the calf a bottle every three hours for the next several months. The veterinary team took x-rays of the calf today to see if his gastrointestinal tract is functioning properly and were pleased to see that it is.

Orphaned calves are typically rehabilitated until they are at least 600 pounds, which usually takes about two to three years.  At that time if they are deemed healthy they will be returned to their natural environments.
Earlier today, the team assisted in successfully rescuing and relocating six manatees that had stranded in the Melbourne, FL area, likely due to unusual tides and water levels associated with Hurricane Irma.