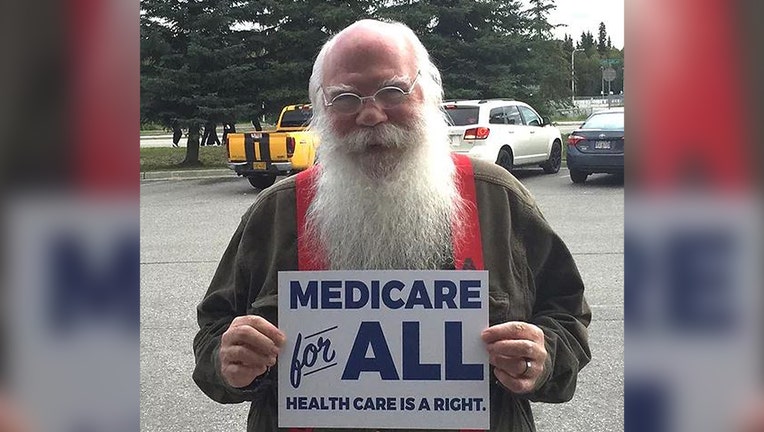 Santa Claus photographed with a sign that reads "Medicare for all, Health care is a right."

These candidates include a professor, an ex-governor, some fishermen and some lawyers, but the two-term council member for the city of North Pole, Alaska — whose real name is indeed Santa Claus — hopes name recognition will help him win his ticket to Washington.

Claus has filed to run for the remainder of Young’s term earlier this month. He will be facing off against some of Alaska’s elite political figures, including former Gov. Sarah Palin (R), former Senate Majority Leader John Coghill (R), surgeon Al Gross (I) and more.

Claus says he plans to spend no more than $400 of his own money on his campaign and thinks the amount of money raised for political campaigns is ridiculous and could be used for more needed resources. He isn’t accepting any donations and the only awareness he plans to invest in is his Twitter account, which launched on April 1 and now has amassed more than 10,000 followers as of April 25.

While some may argue that his name and look won’t allow voters to take him seriously, Claus says there’s no better name recognition.

Still, Claus hopes his campaign promises will be of more interest to constituents. He says he is running on a platform similar to Bernie Sanders, calling himself an independent, progressive, democratic socialist.

"A lot of my platform resembles Bernie’s, but rather than add 20 pages to my website SantaClausForAlaska.com, I just refer people to Berniesanders.com/issues if they’re really interested," Claus said in an interview with FOX TV Stations on April 22.

Santa Claus running for congress, says he represents all Alaskans

A man named Santa Claus, who is currently a two-time city council member for North Pole, Alaska, has filed to run for Alaska’s lone U.S. House seat on a platform similar to Bernie Sanders’.

The alignment with Sanders’ views may prove to be fortuitous, since Sanders won Alaska’s 2016 Democratic presidential caucuses with 80% of the vote, capturing 8,447 votes to Hillary Clinton’s 2,146.

Some other policies Claus plans to work for include reinstating the child tax credit, more support for unions in Alaska, student loan forgiveness, and removing the cap on the Social Security tax contribution for the wealthy.

Who is Santa Claus?

While it seems at first glance a candidate bearing the same name and even looking like Father Christmas wouldn’t stand a chance against political figures with concrete ties to the American political system, this unlikely candidate has a wide range of experience and a resume unlike any other candidate in the U.S.

Long before he changed his name to Santa Claus, the former special assistant deputy police commissioner for New York City found he had a way with calming people, especially when he worked as a first responder.

Claus, 72, said ever since working in law enforcement, he noticed how children would "fall through the cracks," whether through neglect or in abusive situations. Claus said helping children was always a huge part of the platform that later helped him get a seat on North Pole’s city council.

A longtime Christian monk and member of the Order of Anam Cara, which has its origins in Celtic tradition and translates to "soul friend," Claus found himself living in Lake Tahoe in the early 2000s, which was roughly when he decided to grow out his beard which "came out light," he said.

As his beard grew, so did the suggestions from friends that he "do the Santa thing," as he put it, which eventually led him to volunteer for about 30 different non-profit organizations.

One February, he said, "I was walking on a crisp cold day up in the mountains and I was praying as monks tend to do, saying, ‘What should I do with this appearance? Should I change my name? Should I work solely with children?’"

He went on to say that right at that moment as he was asking for guidance from the ether, someone drove by and screamed "Santa! I love you!"

"That was the answer to my prayer," continued Claus, who promptly called up the county clerk and legally changed his name to Santa Claus.

He said he would use the newfound title to call up senators and governors to support legislation for child health safety and welfare. Though he said he was met with success in his efforts, he believed calling up a government official and saying, "Hey, this is Santa Claus from Lake Tahoe," just didn’t have the right ring to it.

So, after some diligent research, he moved to North Pole, Alaska.

He said he became more engaged in the local politics of the area, volunteering and eventually securing his first seat on the North Pole’s City Council back in 2015 as a write-in ballot, where he served for three years and was just re-elected to continue spreading his mission.

But that wasn’t the start of his own political aspirations. In 2012, when he was living in Nevada, Claus decided to run for president, running on a campaign advocating for more resources for children.

Reflecting on his time helping his community, he said he just wants to help share the spirit of Christmas the way he believes it was originally intended.

"The spirit of Christmas embodies love: love in God, loving one another and expressing forgiveness, and protecting children," said Claus.

As Claus gets ready for a busy midterms, he has previously discouraged receiving Santa letters, saying that he would rather spend his time lobbying with other politicians to "do the right thing for child health safety and welfare."