A Santa Clarita couple is back from Washington DC, after a special meeting at the White House. Speaking to President Trump about their battle with COVID-19.

“When we were actually on the plane getting to DC. I think that’s when it really hit us ... we’re going to the White House.”

Carl and Jeri Goldman were invited to talk about their experience with coronavirus. Back in February, Carl contracted the virus on the Diamond Princess, and somehow Jeri stayed virus free.

Carl says the President has heard mostly data, stats and advice from MD’s, this visit allowed him to hear from a small group who recovered from COVID-19. “They don’t hear the one on one stories from patients themselves, so I think to have time to hear that really tied it all together for them.

There was no agenda for Tuesday’s meeting, but Carl says, the president seemed particularly interested in the studies he’s apart of; including the involving blood samples. By next week, he should know the results of that study. He’s hoping it will confirm the usefulness of a survivor’s plasma to others who are suffering. 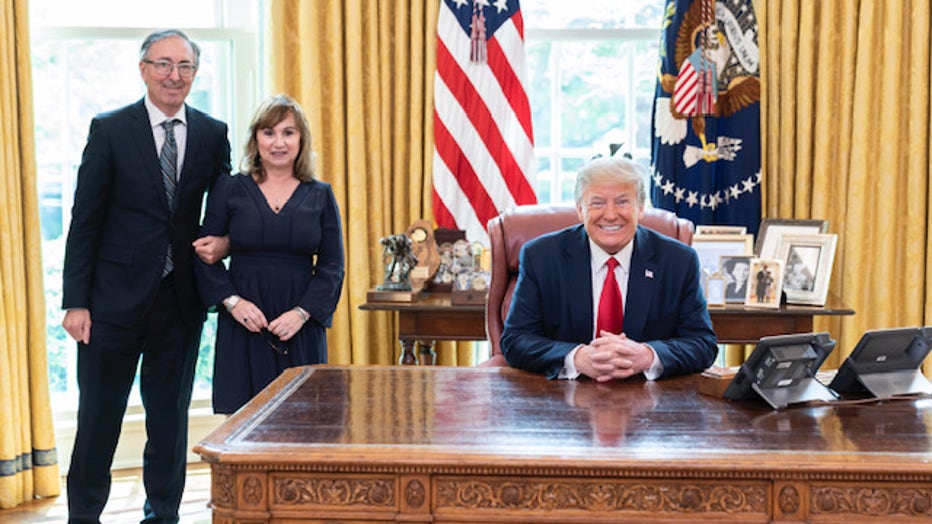 “I’ve had a request for my blood from other patients and glad to give it if I can save a life that way. It would be very very important."

With nothing open in DC, the couple flew home the next morning. He’s home with some amazing memories of the tour of the West Wing and a big, shiny key to the White House, that the President presented to them.

“Apparently, it's very very special. Not everybody who sees the president gets a key to the White House."

Goldman also shared the official photo with Trump and even though, both tested negative for the virus; no handshake and the couple stood the proper six feet away.