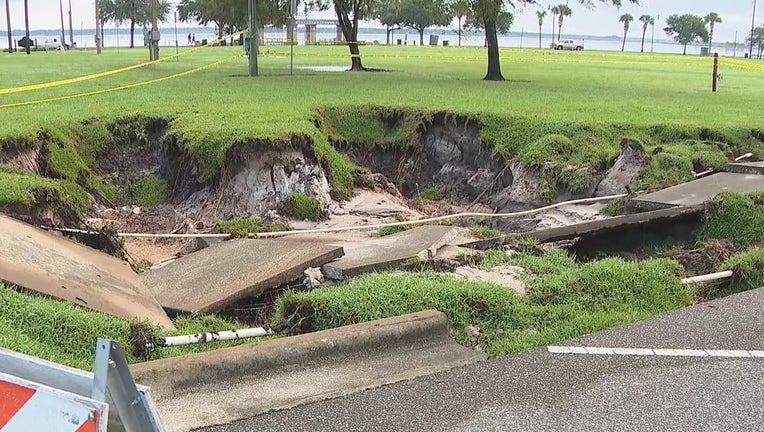 SANFORD, Fla. - The city of Sanford is still out repairing some of the damage from Sunday’s record-setting rain.

Many businesses and homeowners suffered significant water damage and are asking the city to do more to prevent flash flooding like this from happening again.

The city was out making repairs to the Fort Mellon Park sinkhole on Tuesday. Crews capped off one end of the 100-year-old culvert so work can be done to update and reinforce the pipe. The Department of Public Works believes the job will take between 10 to 14 days to complete.

Others like business owners on E. First Street and some local homeowners are still assessing the damage from the storm that dumped five inches of rain in less than 45 minutes.

"There is no stormwater system that is really designed to convey that amount of rainfall," said Sanford Director of Public Works and Utilities Bilal Iftikhar. "There can be but it is cost-prohibitive to design something that big."

Downtown Sanford looks like a river after heavy rain

The Orlando Sanford International Airport broke its daily rainfall record on Sunday that was previously just over two inches, set back in 1984. Nearby Downtown Sanford looked more like a shallow river and disrupted diners along First Street.

Iftikhar told FOX 35 that the city has been working on upgrades to the irrigation lines for close to 15 years. One of the very first projects came on First Street.

"The improvements in the stormwater system operated perfectly. Once it stopped raining all the water receded within a matter of hours," Iftikhar added.

Millions of dollars have been invested into similar projects including one by North Myrtle Avenue. The new stormwater pipe will double in size of the previous to 42 inches wide.

"There about three or four additional projects that are in design now so we are always making improvements to our stormwater and utilities," said Iftikhar.