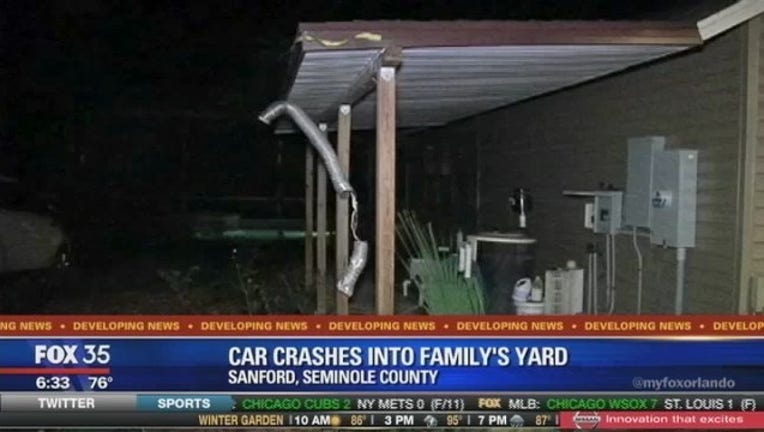 SANFORD, FL –  A car crashes into a family's yard overnight after a high speed police pursuit. It was around midnight when police say two men driving a stolen car crashed into a neighbor's yard after a police chase through 2 separate counties.

"I woke up to a loud bang; they ran over our gas line,” said the homeowner Billy Carson.

Sanford police arrested 24 year old Dontavious Rashad Watkins and 24 year old Brandon Donate Washington. Police say the two men were in a stolen white Kia Soul that was used in an armed robbery a few days ago. The men have not been charged with that robbery as police continue to investigate. Officers tried to do a traffic stop to get the driver to pull over but instead he sped off. According to the arrest report the suspects were going as fast as 100 miles an hour on State Road 46 into Volusia County. Then the two ended up crashing in Billy Carson's front yard in Sanford.

"That's when I woke up and as you can a whole bunch of police,” said Carson. “Yeah scary especially in my backyard listening ‘freeze don't move or else I'll shoot you!’ That's nothing you want to hear in the middle of your sleep when you go to bed at night.”