DELRAY BEACH, Fla. - Saltwater Brewery in Delray Beach, Florida opened in 2013 with two goals in mind: Make good craft beer and be kind to the environment, specifically the ocean.

"We all grew up as boaters, surfers, and fishermen. We saw first-hand the problem of pollution," explained co-founder Dustin Jeffers.

The brewery decided to build a better six-pack and ditch traditional plastic ring binders, which experts say are responsible for killing as many as 100,000 marine animals a year.

Jeffers realized the answer was already in-house. Grain is a key ingredient in beer, producing sugar, color, and flavor. Waste generated by the grain usually is donated to farmers for cattle feed, but the Saltwater team saw an even better use.

"It's what our E6PR rings are made out of," Jeffers explained.

The six-pack rings are biodegradable since they are made from pressed, recycled grain. They fully disintegrate in about 120 days.

The rings are flexible and stand up to a fair amount of pressure when twisted. However, if they are submerged in water, the rings are less likely to harm marine animals. 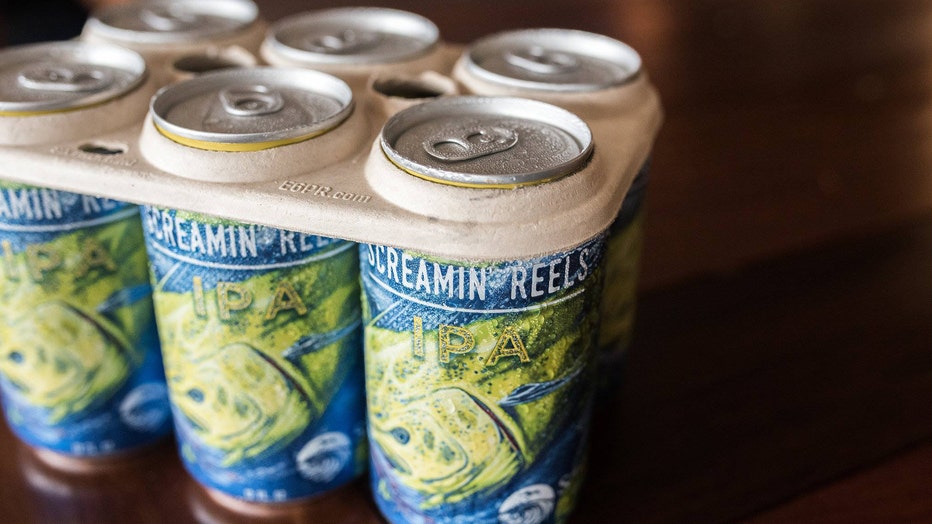 "Even after a couple hours, it starts getting more pliable. So, something would be able to wiggle out of it, bite through it even easier," Jeffers said.

Unlike plastic, E6PR rings are also digestible if an animal were to chew on it.

Beer-drinkers have embraced the innovation.

"I think it’s a fantastic idea. We have to protect the environment and this is a very pragmatic step to do that from a private company that's looking to solve a problem in the real world," commented Steve Loving.

Six foreign countries already use the rings. Major brewers like Corona and Guinness are testing them out.

"If we can fix that issue and then get people thinking about other plastic in their lives to reduce, we think that's a win-win," said Jeffers.