SOUTHFIELD, Mich. (FOX 2) - A Royal Oak Democrat, lawmaker, mother, and LGBTQ rights supporter who was accused by a Republican colleague of wanting to "groom" schoolchildren says her impassioned response resonated because people are sick of such attacks.

Democratic state Sen. Mallory McMorrow delivered a verbal response to Republican Sen. Lana Theis, who claimed McMorrow was a liberal social media "troll" and accused her of wanting to "groom" and "sexualize" kindergartners and teach "that 8-year-olds are responsible for slavery."

On Tuesday, McMorrow took the floor in Lansing.

"I didn’t expect to wake to the news that the Senator from the 22nd District had overnight, accused me by name, of grooming and sexualizing children in an e-mail fundraising for herself," she said. "I am a straight, white, Christian, married, suburban mom" who wants "every kid to feel seen, heard and supported — not marginalized and targeted because they are not straight, white and Christian."

Theis and McMorrow are not running against each other but the attack appears to have stemmed from a session last week when Theis opened a Michigan Senate session with an invocation by claiming children are being attacked by "forces" that want to indoctrinate them with ideas their parents do not support.

Three Democrats walked out of last week’s session to protest her apparent reference to how schools address sexual orientation and gender identity and critical race theory. McMorrow tweeted criticism of the prayer was targeted by Theis in a fundraising email. That led to McMorrow's response.

"We cannot let hateful people tell you otherwise to scapegoat and deflect from the fact they are not doing anything to fix the real issues that impact peoples’ lives. And I know that hate will only win if people like me stand by and let it happen," she said.

The salvos were among the latest to draw widespread attention in the country’s ongoing culture wars, as conservatives push to make education a political wedge issue. They have said they are trying to prevent "grooming," a term used to describe how sex offenders initiate contact with their victims.

"What a horrible thing to say to somebody and not care about the consequences," McMorrow told reporters Wednesday.

After McMorrow’s speech, there was no response by anyone in the state senate, but a clip went viral and was retweeted by former Secretary of State Hillary Clinton, who was also the target of baseless pedophilia claims of by Republicans during her Presidential run in 2016. 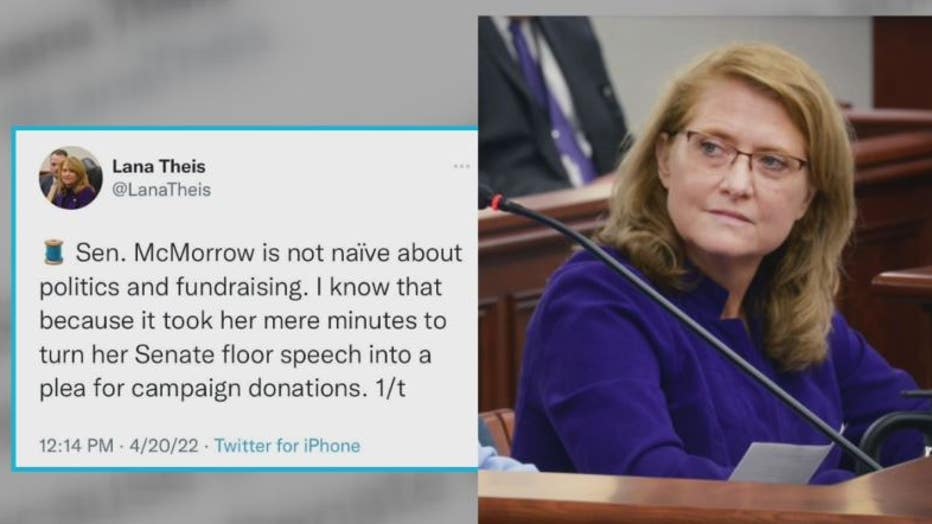 Sen. Theis did not respond to our request for comment but did send a message on Twitter that said McMorrow is not naive about politics and fundraising and turned her speech into donations.

She adds: "While Senator McMorrow is preaching to her choir on MSNBC, I’ll keep my focus on Michigan parents, who Democrats are seeking to undermine as primary decision-makers."

Oakland University Political Science Professor John Klemanski says the problem with this back and forth is it strays away from issues like fixing Michigan's roads and taxes.

"What concerns me about all of this is that the voters have gotten totally lost in all of this," he said. "It seems like on the Republican side, particularly, there seems to be more of a willingness to make these outrageous statements."

Klemanski said McMorrow had to respond to the claims.

"The fact of the matter is it doesn’t go away. I think that’s why Senator McMorrow had to address it…. Let’s stop this. Let me address this. And she does."

Asked why it resonated, McMorrow said: "There is a difference between politics and outright hate. I think people are frustrated that elected officials haven’t done enough to call that out, that maybe Democrats are afraid of talking about religion and faith openly and honestly and calling hate what it is. I think we have to."

Accusations of grooming and pedophilia are "straight out of the QAnon playbook," she said, referring to the conspiracy theory. She said she has "felt incredibly frustrated that people have been weaponizing religion and Christianity and frankly white, suburban moms and claiming to speak on behalf of all of us. ... They don’t."

Both McMorrow, of Royal Oak, and Theis, of Brighton, are up for reelection in different districts. Former President Donald Trump is backing a primary challenger over Theis after a Republican-led legislative committee she sits on determined there was no widespread or systemic fraud when Joe Biden won Michigan in 2020. 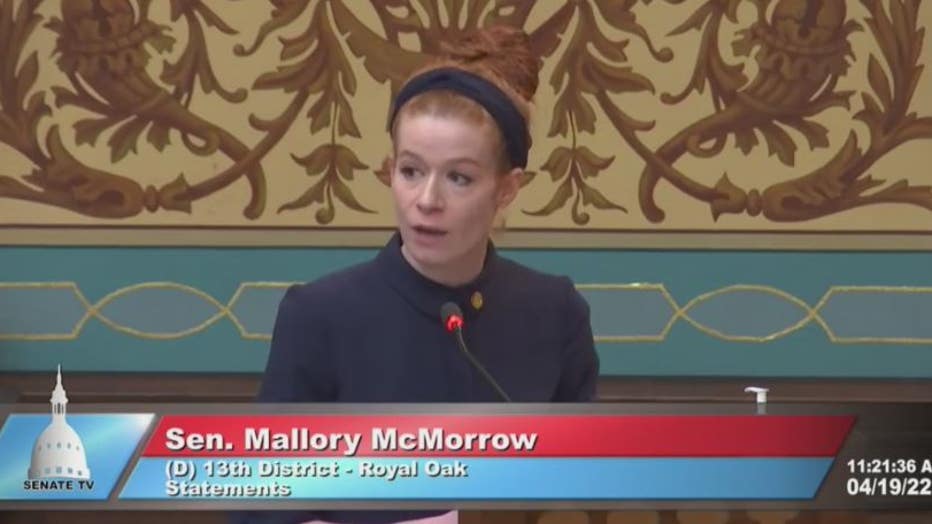