RIVERVIEW, Fla. - Days after an 11-year-old boy was struck by lightning in Riverview, his parents said their son is now back at home and out of the ICU.

Despite the harrowing ordeal, he was even able to have visitors on the Fourth of July, with deputies from the Hillsborough County Sheriff's Office greeting him in his hospital room.

On the afternoon of June 30, young Levi Stock was returning from a boat trip with his family when he was struck by lightning just outside the ramp at Williams Park.

"I was talking to his dad. He says it looked like a Mike Tyson knockout. I mean, his body just went overboard, and he began to sink underwater," said Pastor Daniel Butson of Fishhawk Fellowship Church, who is close with the Stock family.

Levi was rushed to Tampa General Hospital in critical condition. The family says it's a miracle he's alive.

FOX 13 spoke to Levi's dad, Derek Stock, on Monday afternoon after his son had arrived home from the hospital.

"I don't understand the full plan of why this happened, but I do know there was a lot of people praying for us," he said.

He said they had a pleasant afternoon on the water off the Williams Park boat ramp in Riverview, until a storm rolled in at around 4 p.m. Thursday. On their way back, the lightning bolt struck, approximately a hundred feet from the ramp. 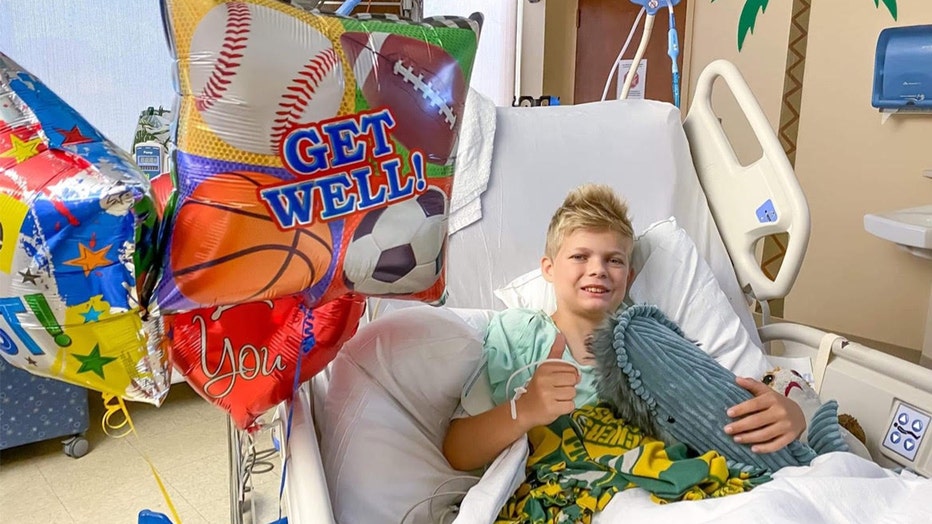 "I physically saw the strike go through him," Derek said. "He just keeled over. Chin went down, joints all locked up. Stiff as a pole."

The strike knocked Levi off the boat. Derek, and others nearby, were able to bring him ashore. Derek started chest compressions, which he says are critical for everyone to know how to perform.

Derek said his son wasn't breathing and had a faint pulse when he left in the ambulance. After, first responders told him that Levi went into cardiac arrest. By the time they got to the hospital, Levi was in the ICU, but brain scans were promising, and other than a few seizures, he got better by the day.

11-year-old Levi Stock comes home after being struck by lightning in Riverview.

"He doesn't remember leaving the beach and trying to beat the storm," Derek said. "But he was fishing and swimming."

After four days of steady improvement, he was released from the hospital. He and family are still shaken up, but he is able to walk, albeit with some pain in his legs.

"He made it. God has big plans for him. God has a reason for everything, sometimes we don't understand the big picture," Derek said.

READ: When thunder roars, go indoors: Lightning strikes pose threat, even when skies above are sunny

Florida ranks first in the country for lightning strikes. The odds of being struck by a bolt in a given year are less than one-in-a-million, and almost 90% of victims survive. Still, lightning kills around 20 people each year in the U.S., and hundreds more are injured.

"Lightning can strike seven to 10 miles away from the parent thunderstorm," explained Chief Meteorologist Paul Dellegatto.  "So even though you see a thunderstorm in the distance, if you hear thunder technically you’re in danger of being hit."

Experts said the last place you want to be when thunder roars is under a tree or out in the open. The safest place is inside a structure with plumbing, or a vehicle with a metal roof.