MILWAUKEE - "The crisis has not changed."

That is what 10th District Milwaukee Alderman Michael Murphy said nearly two years after a task force he chaired made dozens of recommendations to curb reckless driving.

24-year-old Dirul Chaplin doesn't seem worried about the consequences of his behavior.

"Why you all got to, like, I’m on a chase or something?" Chaplin asked after a Milwaukee Police officer pulled him over for blowing a red light and a stop sign near 4th and Maple in August 2021.

"I got to catch up to you, right?" the officer replied.

Chaplin wasn't in the mood for a long wait.

"I can’t just give you my name and stuff, so I can hurry up the process?" he said. "'Cause I really got to go."

When Milwaukee politicians talk about reckless drivers, they might as well refer to Chaplin by name.

In the last three years, police in southeast Wisconsin have stopped him at least 35 times.

Between 2019 and 2021, Milwaukee police pulled Chaplin over 21 times. Milwaukee County sheriff's deputies, nine times. Glendale and Elm Grove Police also stopped him at least once apiece. And those are just the ones we know about.

"You’ve got the worst driving record I’ve ever seen," a Milwaukee Police officer said to Chaplin after stopping him for going 66 miles per hour in a 30 miles per hour zone last summer.

Over a three-year period, Chaplin has been cited twelve times for speeding, three times for running red lights, and once each for fleeing, unsafe cutting, endangering safety, passing at an intersection and reckless driving. He's also been cited at least ten times for driving while suspended or revoked.

Each time police stop Chaplin, they find he has no license plates, no registration, no insurance, and no valid license.

"You don’t have ID on you?" an officer asks during one stop.

"No," Chaplin answers, before lighting up a cigarette.

Each time, they watch him drive away - illegally.

"You just let him go to continue violating the law," said Tristain Thomas, an Appleton man whose sister was recently killed in crash in Milwaukee. The driver who slammed into her car is charged with operating while revoked causing death.

"It's been very difficult," Thomas said.

Thomas watched a series of body camera and squad car videos obtained by FOX6 Investigators that document five of Chaplin's traffic stops in the summer of 2021. In one video, an officer hands Chaplin a citation, then gives him a ‘fist bump’ before sending him on his way. 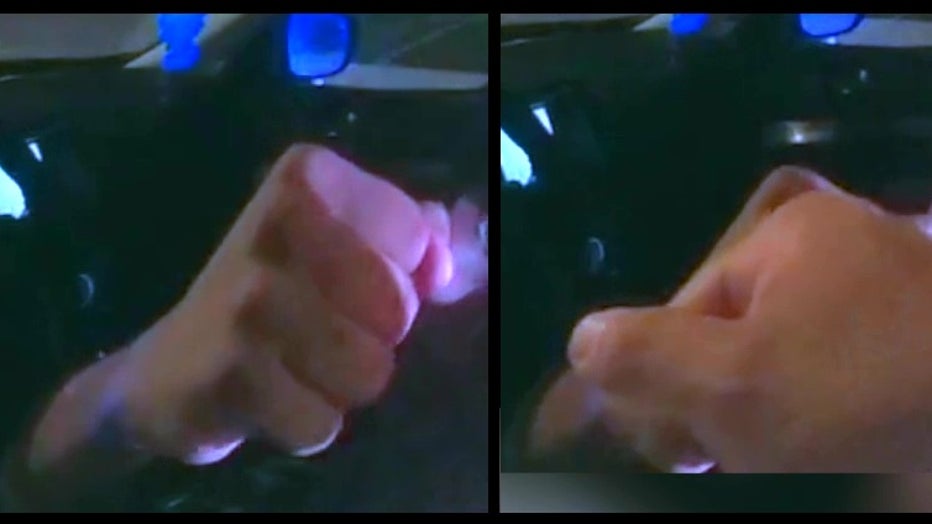 A Milwaukee Police officer gives Dirul Chaplin a fist bump just before Chaplin drives away from a traffic stop in August 2021.

"It’s so disrespectful," Thomas said, "to everybody that has lost someone because of someone who was driving like that."

For Thomas, that someone was his sister.

Police say the man who caused the crash that killed Dwynetta Thomas in March had his license revoked 5 years ago, but kept driving anyway. So you can imagine what Thomas thinks of drivers so enamored with their own reckless behavior, they record it.

"My blood was boiling," Thomas said of a video Chaplin posted to Facebook in August 2019.

"We’re gonna take it to heaven!" says a voice in the video as the car hurtles down a Milwaukee street at high speeds.

"You have no regard for anybody else’s life, much less your own," Thomas said. "You’re out here thinking you’re cool, and you’re really not."

"Something needs to be done about this," said Helen Dachs during a public safety committee hearing in December.

"We can’t wait any longer," declared Mabel Lamb, a member of the Sherman Park Community Association.

"This has got to be a full scale approach to everything," Sunn said.

In the first six months (March through August 2021), TSU officers wrote more than 15,400 speeding tickets. That's more than four times the number of tickets from the same period in 2020 and triple the number from 2019, before the pandemic. 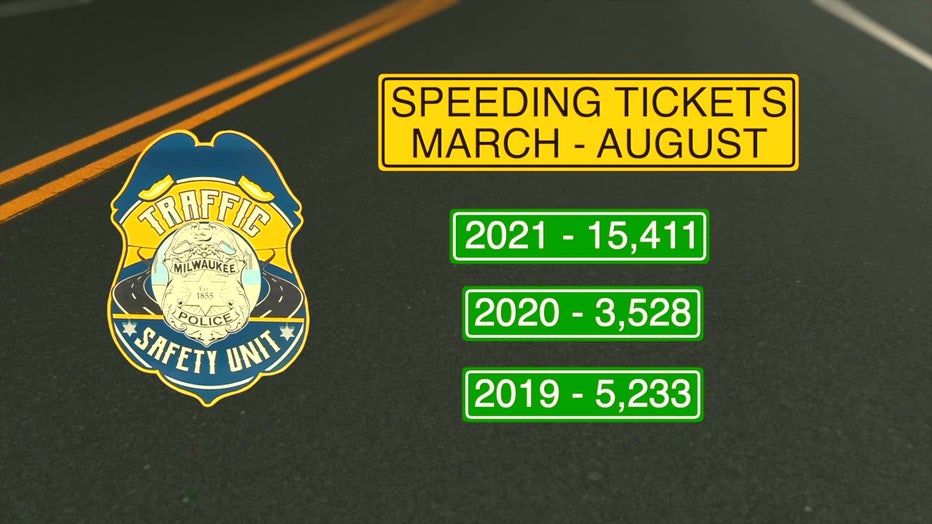 But Murphy says tickets alone won't cut it for the worst offenders.

"They take those tickets, look at ‘em, throw ‘em in the back of the car, drive off," Murphy said. "That’s exactly what happens."

Chaplin has racked up more than $9,400 in fines from 73 municipal citations, almost of which remain unpaid.

"It has moved to a whole different level of disrespect," said Tyrone Dumas. He wants the city to send a stronger message.

"What's wrong with lowering the boom?" he asked.

The county's former director of public works spent a decade helping young drivers get suspended licenses reinstated. However, with the recent surge in reckless behavior, his tone has changed.

Consider the string of stops last summer when officers and deputies pull Chaplin over eight times in 33 days. Every time, he was driving the same car. A white Infiniti G37.

"I bet if you didn’t have your car for 30 days you’ll think about the fact that, 'Ooh, there's a consequence'," Dumas said.

"And he responded!" Dumas said.

Dumas suggested officers crack down on reckless drivers by taking away their cars. Police listened.

The Milwaukee Fire and Police Commission approved a change in policy (see pages 6 and 7 below) that will allow police officers to have a reckless driver's vehicle towed under limited circumstances.

First, the vehicle must not be properly registered.

Second, the driver must be endangering safety by reckless driving, speeding 25 miles per hour over or more, fleeing from officers or racing.

The commission approved the policy change in February, but it does not take effect until May 1st.

"I think this is just the start," said Joan Kessler, a member of the FPC Commission. 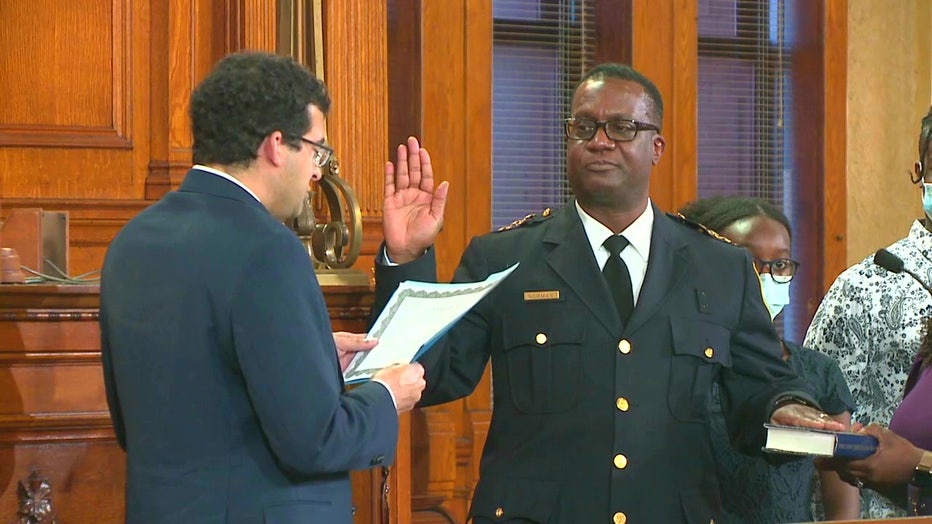 "We don’t want officers waiting for tows for hours on end," said Captain Sunn, who added officers will still have discretion. "The officer does have an option, but most officers are going to tow this individual."

One member of the Fire and Police Commission – Amanda Avalos – warns the new tow policy will have a disparate impact on poor drivers.

"That’s why I disagree that this is the next step," Avalos said.

"Why am I supposed to bleed my heart for you when you were willing to put other people in danger?" Dumas said.

Danger is written all over Dirul Chaplin's driving record.

The question is what it will take to change is behavior before the consequences are irreversible.

The Milwaukee Police Department's new reckless driving tow policy takes effect Sunday, May 1st. While Dumas wanted police to take away a reckless driver's car for 30 days, police say there is no time limit specified in the policy. In theory, a reckless driver could retriever his or her car from the city tow lot the same day.

A spokesperson for the Department of Public Works, Brian DeNeve, tells FOX6 Investigators the vehicle's owner would need to present a title and proof of registration to get the car back out. Since cars towed under the new policy will be, by definition, unregistered, that means the vehicle owner will have to register the vehicle before the city will release it. They'll also have to pay a 105 dollar tow fee, 20 dollars per day for storage and a 60 dollar citation for driving an unregistered vehicle. DeNeve says they will not drive a vehicle off the lot for $25, as they currently do for drivers without insurance.