Groups gather in protest of lockdown orders across the US

Protesters have taken to the streets, fed up with the economy-strangling restrictions put in place to halt the spread of COVID-19. Here's a deeper look.

LOS ANGELES - Two California doctors who made headlines for downplaying the seriousness of the COVID-19 pandemic, calling for an end to social distancing orders, have been called out by medical experts for spreading misinformation.

Drs. Dan Erickson and Artin Massihi, co-owners of Accelerated Urgent Care in Bakersfield, California, which operates a private walk-in COVID-19 testing site, claimed that after testing more than 5,000 patients for COVID-19, their data suggested that the current social distancing lockdown orders are overblown, even going so far as to claim that they are being pressured to add COVID-19 on death reports, according to an interview they did with Laura Ingraham on FOX News. 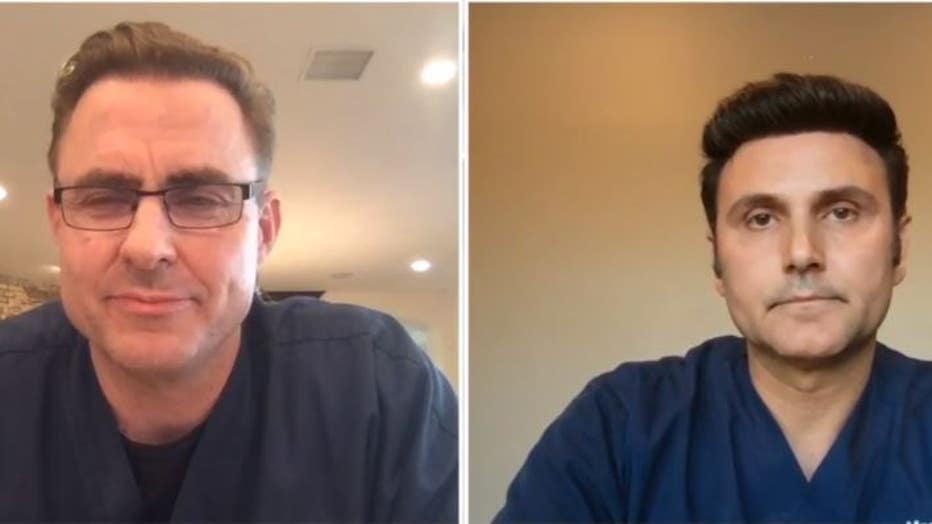 The two garnered even more attention after Tesla and SpaceX owner Elon Musk tweeted a video clip of the doctors with the caption, “Docs make good points.”

“We quickly remove flagged content that violate our Community Guidelines, including content that explicitly disputes the efficacy of local health authority recommended guidance on social distancing that may lead others to act against that guidance," a spokesperson for YouTube said. "However, content that provides sufficient educational, documentary, scientific or artistic (EDSA) context is allowed -- for example, news coverage of this interview with additional context. From the very beginning of the pandemic, we’ve had clear policies against COVID-19 misinformation and are committed to continue providing timely and helpful information at this critical time.”

Both Erickson and Massihi say their call to return to normalcy is backed by data that they claim they have gathered after testing more than 5,000 patients for the virus — data which fellow medical experts say is misleading.

The two doctors claimed to have extrapolated their data and concluded that COVID-19 is not as deadly as the seasonal flu. The pair criticized Dr. Anthony Fauci, the nation’s top infectious disease expert, saying, “Dr. Fauci hasn’t seen a patient in 20 years,” in a interview with local TV news station KERO 23.

But other experts in the fields of health and science have pointed out major discrepancies in the two doctors’ data.

“They’ve used methods that are ludicrous to get results that are completely implausible,” Dr. Carl Bergstrom, a University of Washington biologist who specializes in infectious disease modeling, told the OC Register.

Following the claims made by Erickson and Massihi, The American College of Emergency Physicians (ACEP) and the American Academy of Emergency Medicine (AAEM) issued a statement of condemnation against the two doctors, saying that their members “jointly and emphatically condemn the recent opinions released by Dr. Daniel Erickson and Dr. Artin Massihi,” and assailing their claims as “reckless.”

“These reckless and untested musings do not speak for medical societies and are inconsistent with current science and epidemiology regarding COVID-19. As owners of local urgent care clinics, it appears these two individuals are releasing biased, non-peer reviewed data to advance their personal financial interests without regard for the public’s health.”

“The data cited by Drs. Erickson and Massihi is extrapolated from a small population to the state of California, resulting in misleading conclusions regarding the mortality of COVID-19.” The organization added.

Even as the two doctors claim the coronavirus mortality rate is overstated, most experts say the death toll for the virus is likely undercounted.

Jennifer Nuzzo, a senior scholar at the Johns Hopkins University Center for Health Security, told the New York Times that due to a lack of testing, as well as a clear system for reporting COVID-19-related deaths, the real number of deaths could be much higher.

“We definitely think there are deaths that we have not accounted for,” said Nuzzo.

Two people with the coronavirus died in California nearly three weeks before the U.S. officially reported its first death from the disease in late February — a gap that a top health official said Wednesday may have led to delays in issuing stay-at-home orders in the nation’s most populous state.

Dr. Sara Cody, health director in Northern California’s Santa Clara County, said the deaths were missed because of a scarcity of testing and the federal government’s limited guidance on who should be tested.

The infections in the two patients were confirmed by way of autopsy tissue samples that were sent to the Centers for Disease Control and Prevention for analysis. The county coroner’s office received the results on Tuesday, officials said.

China’s official death toll from the coronavirus pandemic jumped sharply on April 17,  as the hardest-hit city of Wuhan announced a major revision that added nearly 1,300 fatalities.

COVID-19 shutdowns are having positive impacts on the environment

Cleaner air and less pollution have been reported across the world.

The new figures resulted from a review of deaths during a response that was chaotic in the early days. They raised the official toll in Wuhan by 50% to 3,869 deaths. While China has yet to update its national totals, the revised numbers push up China’s official reported death toll to 4,632 deaths from a previously reported 3,342, though there has been some skepticism on whether those numbers are accurate.

The ACEP and AAEM, along with many other medical experts who have spoken out against the Erickson and Massihi, warn of the danger of misinformation, especially amid a wave of protests against social distancing orders throughout the country in recent days.

But conspiracy theories and disinformation on the pandemic have spread like wildfire on social media, even before the lockdowns were implemented in order to stop the spread of COVID-19.

RELATED: 'Maybe you're not that bright': Larry David urges people stay inside during coronavirus pandemic

The coronavirus numbers are fake, some social media videos claim. “Social distancing is the new way to control you, your family and your behavior,” another commenter warns. Others say, without evidence, that the pandemic is an overblown hoax.

A wave of Facebook groups launched by pro-gun advocacy groups and conservative activists has mobilized people to protest stay-at-home orders in states around the country. The pages have gained nearly 1 million followers in a matter of days and have become hotbeds for misinformation, conspiracy theories and skepticism around the coronavirus pandemic and health officials.

Twitter users are also pushing YouTube video links that describe the novel coronavirus as a hoax or promote farflung theories that it was created in a lab, using the hashtags ReOpen or Gridlock, said Kathleen Carley, a researcher at Carnegie Mellon University’s CyLab Security and Privacy Institute. Trump has also floated the idea that the virus is man-made.

There's little basis in reality for many of the claims on the sites. The novel coronavirus has infected millions of people worldwide, and the U.S. has recorded more deaths and cases than anywhere else in the world, with the death toll jumping from 50,000 to over 60,000 from April 24, 2020, to April 29, 2020, according to a Johns Hopkins University count.

Stay-at-home orders have been used by governments across the world — and the political spectrum — to try to contain the spread of the virus, as recommended by the world's top health officials.

But the power of suspicion is apparent in the Facebook groups. A private group was key in enlisting people for a “Liberate Minnesota” march outside Democratic Gov. Tim Walz’s home Friday, despite his order limiting large gatherings. Trump backed the protesters on Twitter, calling to “LIBERATE MINNESOTA” before the protest kicked off.

The Facebook groups are peppered with posts that predict the government will force people to get coronavirus vaccinations and videos that claim, without evidence, that health officials are intentionally inflating COVID-19 death toll numbers.