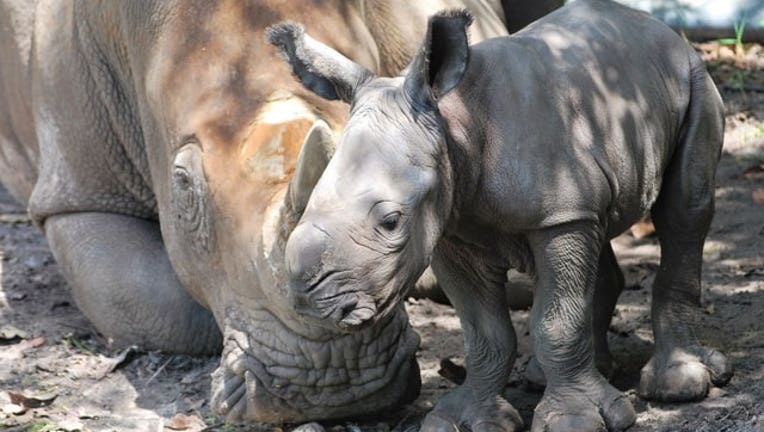 A rare Southern White rhino was born on Sept. 22 – which just happens to be World Rhino Day!

The baby, named Aziza (meaning precious), is the second offspring born to 8-year-old mom Anna. She is the 37th rhino calf born at the park since 1979.

"During the 1970s, this species was teetering on the edge of extinction with less than 1,000 individuals left on the planet. Today, thanks to multi-national collaborative breeding and protection efforts, there are an estimated 20,000 white rhinos and each new birth contributes to their continued conservation," the company said in a news release.

Rhino moms give birth to a single calf weighing between 88 and 132 pounds. According to Lion Country Safari, Aziza is expected to gain 3-4 pounds a day from her mother's milk, and will gain about 1,000 pounds a year for the first three years.

MORE NEWS: Shaq rejects celebrity status: 'These people are out of their freaking mind'

"Both the calf and mom are spending quality time bonding in a maternity area, which is visible to guests from their cars in the drive-through safari," the company said in a news release.

Aziza is a significant new part of the White Rhinoceros Species Survival Plan, a national collaboration to save the species from extinction.

Lion Country Safari is home to 14 White Rhinos – 11 females and 3 males. They say of the five species of rhinos, the white rhino is the most abundant, but all 5 species are in peril due mostly to poaching.