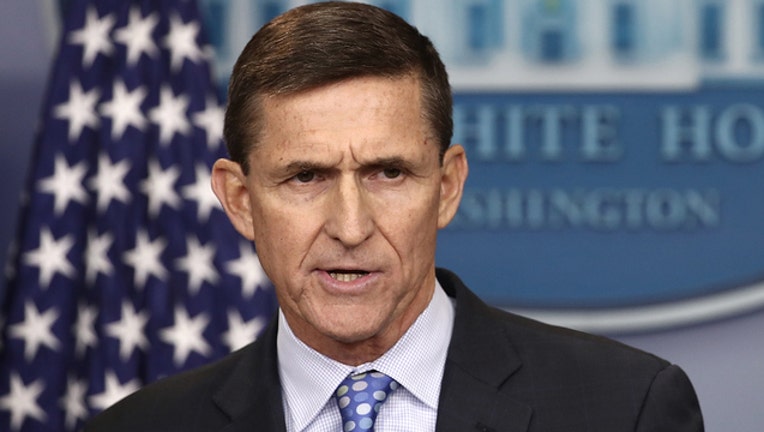 The new charges appear to shed light on the cooperation of Flynn, who last year admitted to lying about several aspects of the lobbying work. In recommending he serve no prison time, prosecutors said Flynn not only helped with the Russia probe but also an undisclosed — and separate — criminal investigation. Documents filed alongside that recommendation spend several paragraphs laying out the details of Flynn's Turkish lobbying.

Flynn, a retired three-star general, also admitted to lying to the FBI about conversations he had with the then-Russian ambassador. Flynn's sentencing is set for Tuesday.

Kian, whose full name is Bijan Rafiekian, was arrested and made an initial appearance Monday in federal court in Alexandria, Virginia. He is indicted on charges including failing to register as a foreign agent. Alptekin, a dual Turkish-Dutch citizen living in Istanbul whose full name is Kamil Ekim Alpetekin, remains at large.

According to the indictment, Kian was vice chairman of Flynn's business group, the Flynn Intel Group. The two worked throughout 2016 to seek ways to have cleric Fethullah Gulen extradited from the U.S. to Turkey.

Turkish President Recep Tayyip Erdogan has accused Gulen of directing a failed coup. Flynn is referred to in the indictment only as "Person A."

Alptekin is also charged with failing to register as a foreign agent and also making false statements.

The indictment describes Kian and Flynn as co-founders of Alexandria-based Flynn Intel Group, which is listed in the indictment only as "Company A." It accuses Kian and Alptekin of illegally lobbying in the U.S. to discredit Gulen and have him extradited. According to the indictment, Alptekin worked at the direction of the Turkish government, but the defendants worked to conceal that fact.

In the summer of 2016, when Flynn was working as an adviser to the Trump campaign, the three initiated what they called a "Truth Campaign" that compared Gulen to Iran's Ayatollah Khomeini.

On Nov. 8, 2016 — Election Day — Flynn wrote an op-ed piece in The Hill newspaper titled "Our Ally Turkey Is in Crisis and Needs Our Support." The column uses the same comparison between Gulen and Khomeini. The indictment notes that Flynn's column uses identical or very similar language to that prepared by Kian in a draft op-ed.

"We all remember another quiet, bearded elder cleric who sat under an apple tree ... in the suburbs of Paris in 1978," Flynn wrote in the op-ed, mimicking language provided to him by Kian. "He claimed to be a man of God who wanted to be a dictator."

Several days before the column was published, Kian crowed to Alptekin in an email about the advantageous timing of the pending op-ed piece coinciding with Election Day. "The arrow has left the bow!"

Alptekin, who had complained a week earlier that the Flynn Group had not done enough work to honor the contract, responded that Kian's op-ed was "right on target."

Kian and Alptekin's prosecution is led not by the special counsel but prosecutors with the Eastern District of Virginia.