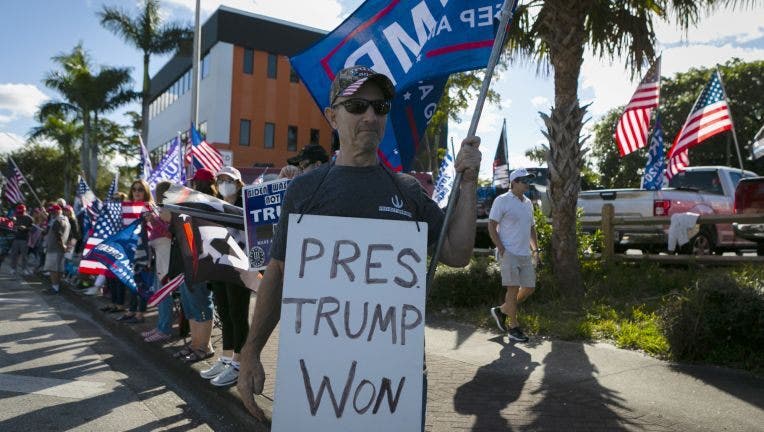 US President Donald Trump supporters wait for the motorcade to pass by on their way to Mar-a-Lago in Palm Beach, Florida, on January 20, 2021. (Photo by Eva Marie UZCATEGUI / AFP) (Photo by EVA MARIE UZCATEGUI/AFP via Getty Images)

ORLANDO, Fla. - Almost half of former President Donald Trump's supporters would leave the Republican party if Trump started his own party, a new poll finds.

A Suffolk University/USA Today poll released Sunday shows that if Trump formed a third party, 46% would support the Trump Party, while 27% would back the Republican Party. About 27% are undecided as to where they stand between the two.

The survey was conducted using a sample of previous voters from national and state elections who had indicated they were planning to vote for Trump. A majority of Trump supporters (54%) said that they feel more loyalty to Donald Trump than to the Republican Party (34%), according to the poll.

Over 74 million voters cast ballots for Trump, the second most in presidential history. His successor, President Joe Biden, received over 80 million, breaking Barack Obama's record for the most votes ever cast for a U.S. presidential candidate.

"These voters more than identify with Donald Trump," said David Paleologos, director of the Suffolk University Political Research Center. "They feel like they are part of him. Many of these voters feel no real connection to government or Washington, D.C. but they are still very connected to Trump."

MORE NEWS: CDC: If you get this side effect from the 1st COVID-19 vaccine dose, don’t get the 2nd dose

Rumors swirled last month that Trump was planning to launch his own political party called the 'Patriot Party.'  However, a longtime adviser to Trump says the former president will be "actively involved" in Republican Party politics going forward and that "I don’t think the president has any interest in being part of a third party."

Trump is expected to speak for the first time since leaving office at the Conservative Political Action Conference in Orlando this week.