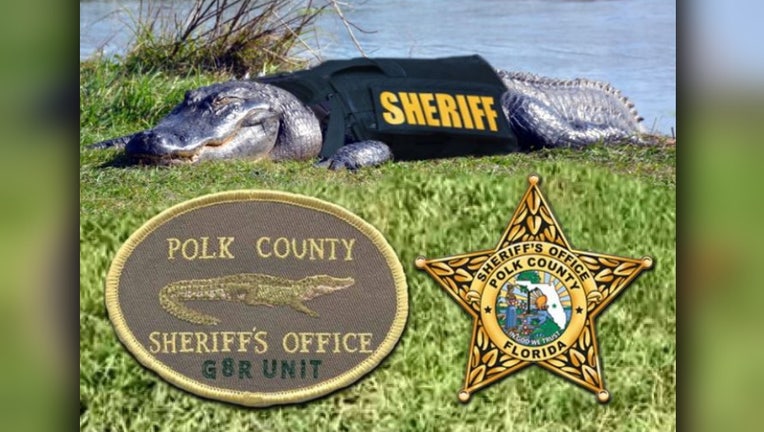 WINTER HAVEN, Fla. - You've heard of law enforcement K9s -- but how about G8Rs?

The Polk County Sheriff's Office is putting the "gator" in "investigator" -- at least for one day.

The agency said they decided to test various animals to be used when suspects jump into bodies of water in an attempt to escape.

RELATED: Massive gator gets trapped on lanai before taking a swim in family's pool

"Otters were among the fastest, but flinging one fifty feet was too simple for the bad guys," the sheriff's office wrote. "Elephants were not only fast, but they were impossible to be thrown by a suspect. Unfortunately, they don't fit in Ford Explorers."

When they considered manatees, they said the sea cows "only fared well when the suspects were older than 95 years old and covered in lettuce, which is a scenario that only really occurs once or twice a month in Polk County."

Cats, meanwhile, don't like water and "only work when they pretty much feel like it, which is almost never."

That led to the winning contender: the alligator. The sheriff's office said the reptiles are fast in the water and can latch onto suspects with ease.

"The Polk County Sheriff's Office is pleased to announce the creation of a unit like no other in the United States: The PCSO G8R Unit," PCSO said.

Of course, at the end of their post, they included the hashtag #AprilFools -- along with #WhatCouldPossiblyGoWrong.

While the post was all in good fun, it's a good reminder that springtime also means gator mating season is about to begin.

According to the Florida Fish and Wildlife Conservation Commission, courtship usually starts in early April, as more alligators begin roaming around to find their mates.