Trump vs. Hogan: Testy over testing

A battle is brewing between President Trump and Maryland Governor Larry Hogan. It comes the same day hogan announced a major testing triumph for Maryland and a day after he criticized the president for saying states have enough tests.

WASHINGTON (AP) - A chorus of governors from both parties pushed back hard Monday after President Donald Trump accused Democrats of playing “a very dangerous political game” by insisting there is a shortage of tests for the coronavirus. The governors countered that the White House must do more to help states do the testing that's needed before they can ease up on stay-at-home orders.

Kansas's Democratic Gov. Laura Kelly said the current federal effort "really is not good enough if we’re going to be able to start to open our economy. We cannot do that safely without the tests in place.”

The plea for stepped-up coordination came on the latest day when the Trump administration provided discordant messaging: Trump blasted state leaders on Twitter for being too dependent on federal government and said later that some governors just didn't understand what they had, while Vice President Mike Pence assured governors the government was working around-the-clock to help them ramp up testing.

Pence sought to soften the administration's message amid growing clamor from governors of both parties for a national testing strategy to help secure in-demand supplies like testing swabs and chemical reagents. White House senior adviser Peter Navarro said the Department of Defense is finalizing negotiations with Puritan Medical Products of Guilford, Maine, to ramp up production of nasal swabs under the Defense Production Act.

“When it comes to testing, we’re here to help,” Pence told governors during a videoconference from the headquarters of the Federal Emergency Management Agency. The Associated Press obtained audio of the call.

Pence said the administration sent an email to officials on Monday detailing current testing capacity by state. But Maryland’s Republican Gov. Larry Hogan said much of the unused lab machinery listed for his state by the administration was in federal labs that the state does not have access to. Pence agreed to open up federal labs to help states. Hogan announced Monday the state received 500,000 tests from South Korea—a “game-changing” deal that was negotiated by his wife, Yumi Hogan, who grew up outside Seoul.

"They want the states to take the lead, and we have to go out and do it ourselves, and so that’s exactly what we did,” Hogan said.

In Kansas, which has about half the national testing rate, Gov. Kelly said part of the problem has been caused by how FEMA has gone about distributing testing material and other supplies.

In Ohio, Republican Gov. Mike DeWine said his state is working with another federal agency, the Food and Drug Administration, to find a source of reagent, the chemical used to analyze test results, so it can ramp up testing. “A lot of good things are going on, but we’re not there yet,” DeWine said. “And we’ve got a ways to go."

Democratic Montana Gov. Steve Bullock said his state received 5,000 nasal swabs on Monday from FEMA — evidence the federal government is listening. But he added: “It doesn’t get us far enough.”

In New York, Democratic Gov. Andrew Cuomo said the states should take the lead on testing but it’s up to the federal government to help sort out supply chain issues facing testing manufacturers.

Pennsylvania's Democratic Gov. Tom Wolf said, “We need the reagents, we need the test kits and I think that’s the sort of general cry from other states."

As Pence spoke with the governors, Trump took to Twitter with a more combative tone than his vice president, complaining that the “radical left” and “Do Nothing Democrats” were playing politics with their complaints about a lack of tests. 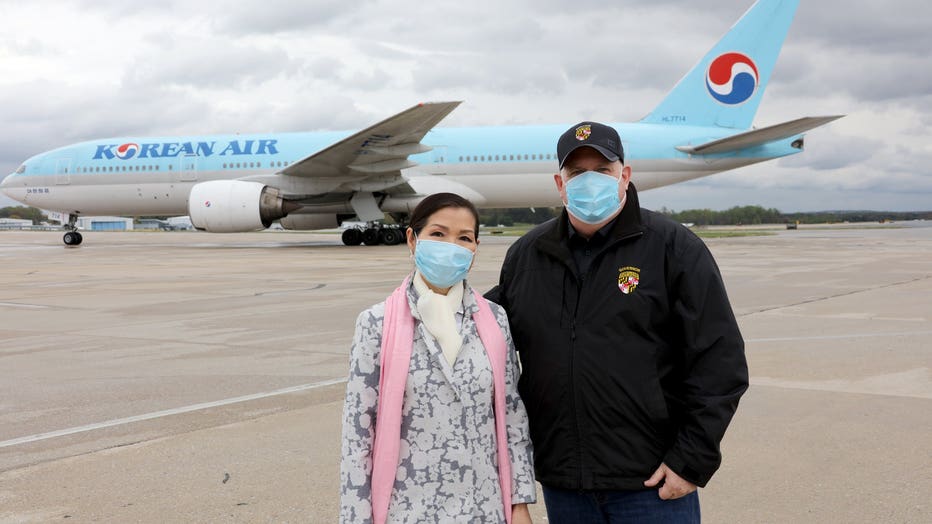 At his daily coronavirus task force press briefing, Trump said that some governors have “more capacity than they understand.” He named Hogan and Illinois Gov. J.B. Pritzker, a Democrat, among leaders that didn't grasp the extent of available testing already in their states.

Trump insisted he was committed to cooperation with state leaders: We are there to stand with the governors and to help the governors.”

Earlier Monday, Trump vented on social media, comparing governors' concerns about a lack of screening capacity to earlier complaints that the states did not have enough ventilators to keep up with the federal government's projections of people who would become hospitalized.

“Now they scream ....'Testing, Testing, Testing,' again playing a very dangerous political game,” Trump tweeted. “States, not the Federal Government, should be doing the Testing - But we will work with the Governors and get it done. This is easy compared to the fast production of thousands of complex Ventilators!”

Public health experts say the country needs to dramatically increase its testing infrastructure if it is going to safely roll back restrictions and reopen businesses without risking a major spike in infections.

Dr. Anthony Fauci, the nation's top infectious diseases expert, told ABC's “Good Morning America” Monday that the country is currently running about 1.5 million to 2 million tests per week. But, “we really need to get up to, at least, you know, maybe two times that, three times that.”

Administration officials have insisted that the U.S. currently has enough testing capacity to safely implement “Phase One" of a plan they released last week to begin a slow return to normalcy. And they have argued that states could be running twice as many tests as they are now if only they were using all the equipment they already have access to.

Testing was an issue on Capitol Hill, too, where the Trump administration and Congress were inching toward an agreement on an aid package of more than $450 billion to boost a small-business loan program that has run out of money. The deal is expected to add funds for hospitals and COVID-19 testing, as well.

For most people, the coronavirus causes mild or moderate symptoms, such as fever and cough that clear up in two to three weeks. But for some, especially older adults and people with existing health problems, it can cause more severe illness, including pneumonia and death.