New body camera video shows a police officer putting out a fire when a vehicle became engulfed in flames after a crash early Sunday morning.

A Jeep full of teens got in that wreck and one of them saved the other driver. The teens were in the area for this weekend's big truck event and found themselves in a nasty wreck with a truck of their own.

As officers pulled up to the scene, there was chaos as officers responded to a crash in Daytona Beach Shores early Sunday morning involving two cars, including one on fire.

The driver of the smoked-out car was saved by Jacob McRae, 18.

"All I remember is screaming for people to help and going to her window because it started to smoke and it started a fire," McRae said. 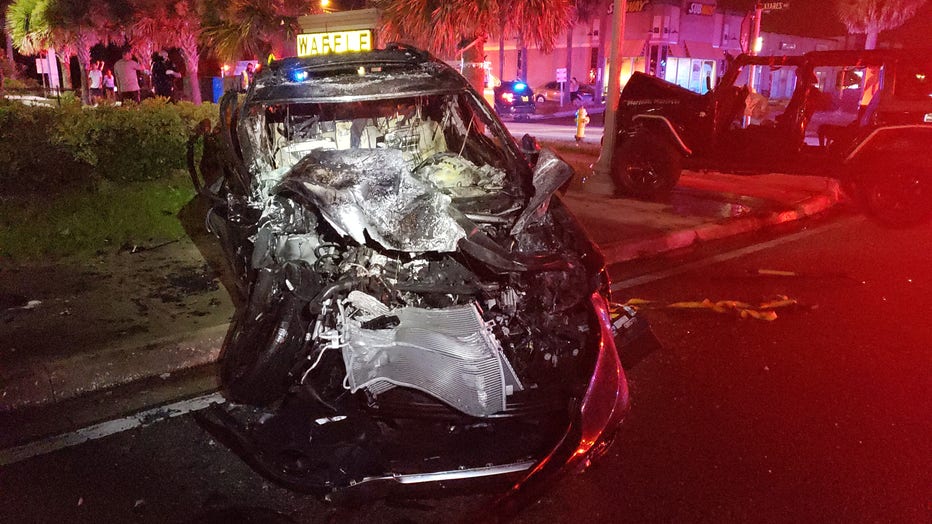 Police say the woman was driving alone in her car and made a left turn, driving right into the 18-year-old's Jeep.

"I just slammed on the breaks and prayed and hoped that I would get out of it. Unfortunately, we just collided," McRae said.

One of McRae's friends was flung from the Jeep. The other car caught fire. That's when McRae stepped in.

"I started banging on her window. 'Are you OK? Are you up? Are you awake?'"

He broke open her window and reached inside, telling police, "I don’t know. I didn’t even see anybody get pulled out of the front. That’s my tow strap. I had to break the window. I just watched a girl get pulled out."

Witnesses told police the woman thanked McRae and then took off in another car with a friend. That woman, Brianna Bruge, is now facing charges.

But McRae has no hard feelings.

"I’m just glad she’s OK and safe now. If that was my sister or my mom, I wouldn’t know what to do if no one did that for them."

McRae says his Jeep, which he built himself, is a loss, but it could have been much worse.

"I’m sore, but I’m thankful that I’m safe and all my buddies are safe."

Burge is charged with a traffic violation and leaving a crash with injuries.