A reporter giving a live weather update in Moscow, Russia, on April 1 was upstaged when a golden retriever jumped into shot and stole her microphone. Credit - ITRC MIR via Storyful

MOSCOW - A reporter in Russia was recently giving a live weather update when a four-legged bystander jumped into the shot and stole her microphone.

Nadezhda Serezhkina was reporting on April 1 in Moscow for MIR 24 when the golden retriever named Martin ran up to her. The dog, apparently attracted to her microphone in shades of blue and green, suddenly jumped into the frame, grabbed the mic from her hands and ran off with it.

The camera then shows Serezhkina, taken aback, chasing after the pooch. The broadcast then turns back to the presenter in the studio, who tried to save the situation by turning the conversation to another topic, according to a translation of MIR 24’s report.

She eventually got the microphone back and later appeared on camera with her new friend, who looked quite content as he received a scratch on the head. No one was hurt. 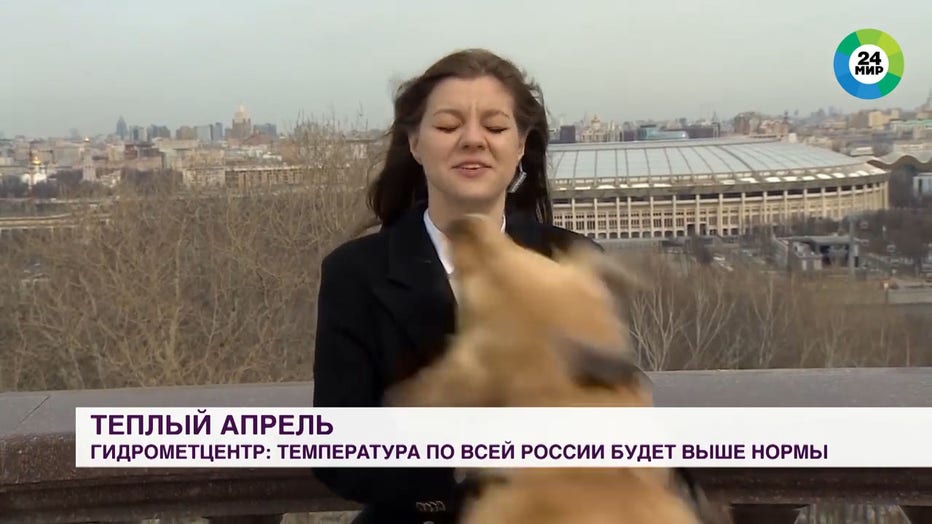 Nadezhda Serezhkina was giving a live report on the weather on April 1, 2021, in Moscow, Russia, when the dog jumped up and her stole her microphone. (Credit: ITRC MIR via Storyful)

Martin’s owner described him as "very kind and playful," according to the station. It also reported that Serezhkina was planning to visit her new furry friend in the coming days.