A female Baribal American black bear and her newborn cub stroll through their enclosure at the Planete Sauvage zoological park in Port-Saint-Pere, near Nantes, western France, on May 3, 2019. (Photo by LOIC VENANCE / AFP) (Photo credit should read LO

After nearly three hours of comments from activists, most opposed to hunting bears, the Florida Fish and Wildlife Conservation Commission agreed to advance a 209-page staff draft report that primarily stresses using education and non-lethal techniques of managing the animals.

The report keeps open the possibility of permitted hunting if interactions between bears and humans escalate amid the increasing number of people in the state.

Chairman Robert Spottswood, the only member who was on the commission when a controversial 2015 hunt was held, called the plan a “balanced approach.”

“The idea of keeping (a hunt) there as a possibility for the future sounds like a sound and wise thing to do,” Spottswood said during a commission meeting in Panama City. “Who knows what is going to happen two, three years from now.”

Vice Chairman Michael Sole said “hunting is a tool” that might not be warranted today but could be required in parts of the state over the next decade.

“I would not be supportive of removing that tool from this plan,” Sole said. “This is a 10-year plan. We’ve got a lot to see in the next several years on where the bear population goes.” 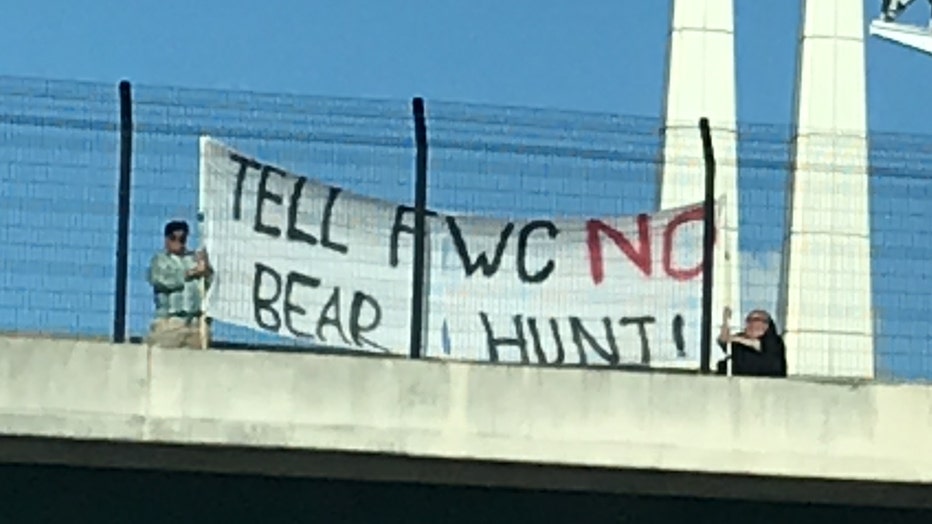 Commission Executive Director Eric Sutton said the bear population isn’t at a “critical juncture” to rush into a revival of hunting. At some point soon, however, more control will be needed that includes hunting, Sutton said.

RELATED: 'No bear hunt': Protestors hang banner over I-4 against having another bear hunt

“The question really is not if we need to do population management, it’s when and how,” Sutton said. “With the advantage of time, we should really prepare to develop our options on the question of how.”

The plan outlines management strategies that include contracted shooting and trapping; fertility control; reducing vegetation near suburban and urban areas; regulated hunts; and relocating adult female bears and their 3- to 4-month-old cubs.

The effort also seeks to maintain the BearWise program, which started in 2016 and has used proceeds from sales of the state’s Conserve Wildlife license plates and legislative funding to assist local governments in providing residents and businesses with bear-resistant trash containers.

Another suggested technique involves working with the Florida Department of Transportation to reduce collisions between vehicles and bears.

Corey Davis, a member of the American Hounds Federation, said the commission should avoid simply calling for random hunts and should establish numbers to maintain the bear population.

“We don’t want a one-and-done bear hunt, like the last bear hunt,” Davis said. “There needs to be a determined number of bears to be taken over a course of three to five years, while also keeping the bear population at a sustainable level.”

But critics said killing bears doesn’t reduce bear-human interactions and that a 20 percent target that would be sought with a hunt is already reached each year through poaching, loss of habitat, nuisance kills and impacts with vehicles.

“Some life forms need killing, regulated, ethically, responsibly, and that was my job and responsibility to defend the (U.S.) Constitution against all enemies foreign and domestic,” said Steve Duresky, a veteran U.S. Air Force fighter pilot. “Bears don’t need killing in this situation. Certainly not this year. Probably not until a lot more thought was put into this.”

Megan Sorbo, an Orlando teen who has been a leading advocate against reviving bear hunting, implored commissioners to increase education about reducing incidents between bears and humans.

“Hunting does not reduce human-bear conflict,” Sorbo said. “We need to focus on improving human behavior, like securing trash and education. Just a couple of months ago, I spoke with someone my age that has always lived in Florida. He did not know that bears even live in Florida and thought that bears were these vicious killing machines that kill any humans for fun. Clearly, education needs to be a higher priority.”

Samantha Gentrup, a teacher from Venice opposed to bear hunting, said the state’s water and wildlife is what makes Florida a unique tourist destination.

“For our state to thrive, we need to preserve both,” Gentrup said.

David Telesco, the agency’s bear management program coordinator, said the goal of the plan is “sustainable coexistence,” meaning a healthy bear population of a minimum of 3,000 bears with limited human interaction.

“We want to have bears on the landscape in suitable habitats to benefit both people and bears,” Telesco said.

The plan is expected to replace a statewide bear-management framework created in 2012.

The state’s bear population has grown from 300 to 500 in the late 1970s to more than 4,000 following the 2015 hunt, which remains the only time hunting black bears has been permitted in Florida in more than two decades.

The October 2015 hunt resulted in 304 bears being killed in two days.

Over the last decade, calls to the commission regarding bears have increased 400 percent, from sightings and bears in garbage to incidents in which people and pets were injured, Telesco said.

According to state records, Florida has had 13 incidents of people requiring medical treatment because of encounters with bears since 2006. Eight of the incidents have occurred since 2012.