Phil Mickelson is considered one of the greatest golfers of all time.

The fallout continues over Phil Mickelson’s comments about the Saudis and the financing of a rival league.

The Desert Sun in Palm Springs, California, reported The American Express no longer will have The Mickelson Foundation as its main charitable arm, and that Mickelson no longer will be the tournament host. Callaway Golf also ended its partnership with the pro golfer, saying it was "very disappointed" with the comments.

"Callaway does not condone Phil Mickelson's comments and we were very disappointed in his choice of words — they in no way reflect our values or what we stand for as a company," a Callaway spokesperson said in a statement to FOX Television Stations Saturday. "Phil has apologized and we know he regrets how he handled recent events. We recognize his desire to take time away from the game and respect that decision. At this time we have agreed to pause our partnership & will re-evaluate our ongoing relationship at a later date."

Mickelson had represented Callaway since the 2004 Ryder Cup at Oakland Hills and his foundation had been The American Express host since 2019. The PGA Tour said it would have no further comment except to confirm Mickelson is no longer involved.

Mickelson, who last year became the oldest major champion in history when he won the PGA Championship at age 50, told author and golf writer Alan Shipnuck that the Saudis behind a proposed breakaway rival league were "scary mother (expletive)s to get involved with."

He also told Shipnuck that it was worth getting in bed with the Saudis, despite their history of human rights abuses, if it meant a chance to change the PGA Tour.

"We know they killed (Washington Post columnist Jamal) Khashoggi and have a horrible record on human rights. They execute people over there for being gay," he said. "Knowing all of this, why would I even consider it? Because this is a once-in-a-lifetime opportunity to reshape how the PGA Tour operates."

The interview took place last November. Shipnuck is writing a biography on Mickelson that is due out in May.

Mickelson, who said he thought the statements were made off the record and were not meant to be shared publicly, has apologized.

"It was reckless, I offended people, and I am deeply sorry for my choice of words," Mickelson said in a statement posted on Twitter.

At the same time as Mickelson's statement, KPMG became the first of his corporate sponsors to announce an immediate end to their partnership, a decision KPMG said was mutual.

"We wish him the best," KPMG, who had been a corporate partner with Mickelson since 2008, said in a statement Tuesday.

Amstel Light said Wednesday it has ended its partnership with the six-time major champion.

Workday, which has sponsored Mickelson since 2017, told Golf Digest it would not be renewing the contract when it expires at the end of March.

On Saturday, Callaway didn’t offer any further details about a timeline of the "pause" of its partnership.

Shipnuck wrote on The Fire Pit Collective, where he published Mickelson’s comments earlier this month, that "not once did he say our conversation was off-the-record or on background or just between us or anything remotely like that. He simply opened a vein."

Shipnuck, who previously wrote for Sports Illustrated, tweeted that Mickelson’s claims he spoke off the record were "completely false."

But in his apology, he made no mention of the PGA Tour or its commissioner Jay Monahan, which he referred to as a "dictatorship" in the Shipnuck interview. Mickelson also said he and three top players had paid attorneys to write the operating agreement of a rival league.

Mickelson's comments would appear to fall under the tour policy of public remarks that unreasonably attack or disparage groups such as the tour.

Last week, PGA Tour Commissioner Jay Monahan said he has "zero complacency" when it comes to the threat of a Saudi-funded rival league, and he has a clear message for any player still tempted to leave.

"I told the players we're moving on and anyone on the fence needs to make a decision," Monahan said Wednesday in a telephone interview.

He also emphasized anew that players who sign up for a Saudi golf league will lose their PGA Tour membership and should not expect to get it back.

Mickelson said he has felt pressure and stress affecting him at a deeper level over the last 10 years and he needs time away.

But he did not say if he would be taking a break from golf. He has not played since the Saudi International on Feb. 6. His statement concluded, "I know I have not been my best and desperately need some time away to prioritize the ones I love most and work on being the man I want to be."

Mickelson said he would not want to compromise his corporate partners and he has given them the option of pausing or ending their relationships with him. On Saturday, Callaway didn’t offer any further details about a timeline of the "pause" of its partnership. 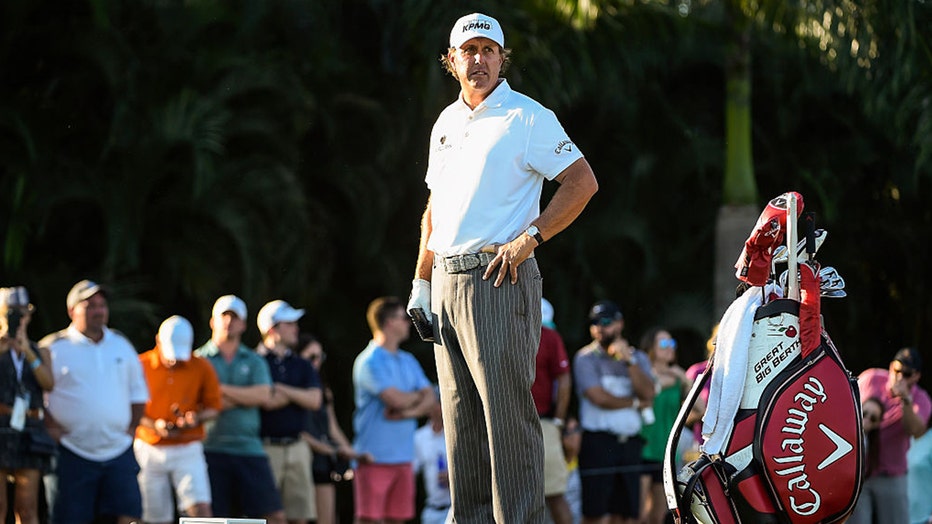 Phil Mickelson stands next to his Callaway bag before teeing off on the 16th hole during the final round of the World Golf Championships-Cadillac Championship at Blue Monster, Trump National Doral, on March 6, 2016 in Doral, Florida. (Photo by Chris

At the heart of his statement was his claim that he has acted in the best interest of golf, the players, sponsors and the fans, "although it doesn't look this way now given my recent comments."

He also said he needs to be accountable "despite my belief that some changes have already been made within the overall discourse."

The PGA Tour has made changes to reward top players amid the threat of the possible Saudi league, launching a "Player Impact Program" that compensates stars for popularity and social-media impressions. Mickelson claimed he won the PIP in its first year.

This story was reported from Detroit. Kelly Hayes and The Associated Press contributed.