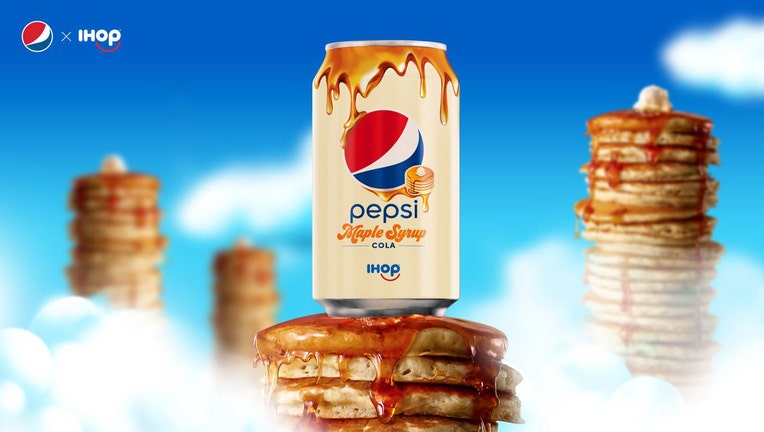 Pepsi and IHOP have teamed up for the release of a new maple syrup cola. (Photo courtesy of Pepsi Co.)

WASHINGTON - Just when you think you’ve heard it all when it comes to soda flavors, Pepsi has raised the stakes.

If you love soda and pancakes, you can enjoy the best of both worlds and a serious jolt to the sweet tooth thanks to Pepsi and IHOP’s collaboration for the new maple syrup cola.

Beginning Thursday, people can get their hands on this limited edition sugary goodness by posting a photo or video of pancakes on Instagram or Twitter tagging #ShowUsYourStack, #PepsiSweepstakes.

"There is truly nothing quite like the indulgent taste of Pepsi Maple Syrup Cola – sweet maple syrup blended with the refreshing taste of Pepsi cola. We couldn’t be more excited to partner with IHOP on this special initiative, as it isn’t often we get to bring together two iconic brands to satisfy the cravings of pancake and Pepsi lovers alike," Todd Kaplan, Chief Marketing Officer for Pepsi said in a statement. "We can’t wait to celebrate those who have an unapologetic love of pancakes by giving the limited-edition cans to 2,000 fans who #ShowUsYourStack online."

IHOP also talked about the new soda and how it can offer a little joy to customers.

"At IHOP we celebrate our history of bringing folks together and providing a sense of togetherness, belonging and joy when they dine with us," Kieran Donahue, Chief Marketing Officer, IHOP said in a statement. "We are thrilled to partner with Pepsi to have some fun and create a moment for our guests to bring home an additional source of happiness with this limited-edition Pepsi Maple Syrup Cola."

Pepsi is no stranger to tapping into their creative side with soda flavors. In 2020, Pepsi released an apple pie-flavored carbonated drink for Thanksgiving. Pepsi also previously announced the release of a hot cocoa-flavored soda for 2021. The company also brought back Pepsi Blue this year, which is a bright blue, berry-flavored soda that hadn’t been sold in stores since 2004.

FOX7 Austin and FOX6 Milwaukee contributed to this story. This story was reported from Washington, D.C.