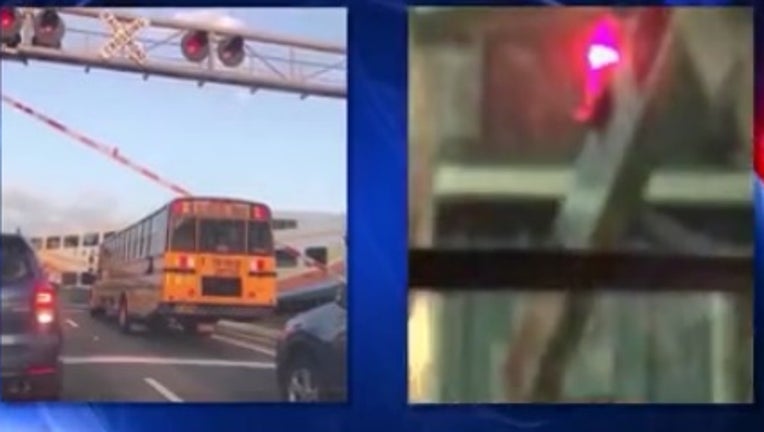 Crossing arms were activated and resting on both Orange County Public Schools school buses as trains passed just feet ahead.

The News Station taking the images of the buses, caught a little too close for comfort, straight to the school district, prompting an investigation.

The investigation determined the two crossings may be especially dangerous because of the obstructions.

The Orange County School District has cleared school bus drivers after the buses were recorded dangerously close to railroad tracks. However, an investigation by the district has determined that two particular railroad crossings present visibility issues.

The district identified visibility issues at both crossings, forcing its drivers to break protocol.

The problem is a building and tall bushes blocking the view of the tracks.

The same issue was evident at the Kaley Street crossing in South Downtown Orlando.

Robert Guaderrama: “How far forward do we have to go before you think your bus drivers would have a good view?”

“Obviously, that’s going to vary with each crossing, but I would imagine for this one here, probably right about here would be good,” Wen said.

That’s more than 20 feet in front of the arm where the buses are required to stop, but the view from that point is blocked.

Even though the district believes there is an issue with the actual layout of the crossings, it says both drivers still broke the rules.

Robert Guaderrama: “So, what was the mistake on their part then? Where did they make the wrong call or where could they have done better?”

“In both cases, they should have continued on, instead of stopping where they were,” Wen said.

Robert Guaderrama: “Does that concern you at all that these crossings require the driver to almost break policy?”

“Well, driving any commercial vehicle is going to be a higher risk than driving a regular personal vehicle, so the training is the key,” Wen said.

After the district’s investigation, every school bus driver in the county was re-trained on railroad crossing rules.

“We did an immediate campaign with all the drivers, all 900 drivers, to go over proper railroad crossing procedures. We discussed these two incidents that occurred. We brought the drivers back to the scene and we had them perform a proper check. We talked about potential consequences and obstacles,” Wen said.

But is there a better way to fix the crossings?

The district says possibly trimming the bushes, maybe even knocking down buildings that are blocking the view.

The district plans to reach out to property owners to start the conversation.

Robert Guaderrama: “Why not just change the routes? It seems like that is the easiest fix?”

“We can’t change every route to avoid a particular crossing, particularly on a major roadway like this,” Wen said.

Robert Guaderrama: “But isn’t it a safety concern?”

“It is but again, if we train the drivers, it minimizes that risk. There’s a risk at any crossing,” Wen said.

The News Station's Robert Guaderrama reached out to the Florida Department of Transportation.

He said the agency is aware of the line of sight issues, but says the obstructions are out of its jurisdiction.

Officials say they have taken some measures to improve warning times and visibility, such as signs and additional road markers that improve awareness of the crossing.