One thing wildlife officials have learned during the winter experimental feeding program to help manatees avoid starvation is that if you feed them, they will come.

ST. PETERSBURG, Fla. (AP) - One thing wildlife officials have learned during the winter experimental feeding program to help manatees avoid starvation is that if you feed them, they will come.

Manatees have eaten virtually all of the estimated 160,000 pounds (72,500 kilograms) of lettuce provided at a warm-water power plant site where manatees typically congregate during cold months, officials said Wednesday during a virtual news conference.

"They’ve eaten every scrap of food we’ve put out," said Scott Calleson of the U.S. Fish and Wildlife Service.

By the time the operation winds down in a few weeks, Calleson said the lettuce total will probably reach 200,000 pounds (90,700 kilograms) — almost all paid for by donations from people across the country.

It wasn’t clear the manatees would eat the lettuce when the unprecedented program began in December. But officials say that since Jan. 20 the slow-moving marine mammals have feasted on the food made necessary after more than 1,100 manatees died largely from starvation last year, the worst year for the threatened species on record.

Through March 11 of this year, about 420 manatee deaths have been confirmed, still an alarmingly high number. But as warm spring weather continues, the manatees are beginning to leave the feeding site to find natural food elsewhere.

"Manatees are spreading out to the warm weather sites, which is a good thing," said Tom Reinert, south regional director for the Florida Fish and Wildlife Conservation Commission.

As successful as the feeding program has been, officials say people must remember it remains illegal for individuals to feed manatees on their own.

About 7,500 manatees, also known as sea cows, live in Florida waters. They are listed federally as a threatened species, although there are efforts to give them the heightened endangered designation. 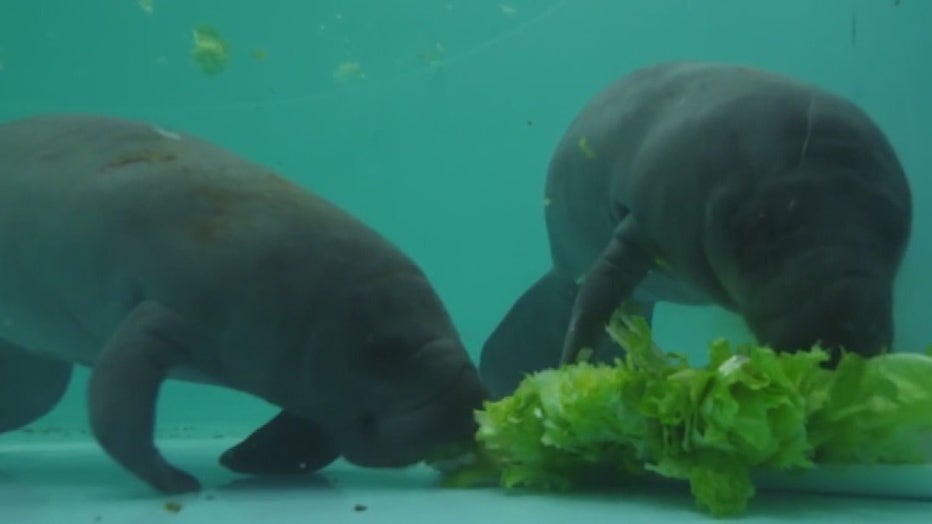 Many of the animals face starvation because their favored seagrass food is disappearing due to chronic water pollution from agricultural, sewage, urban runoff and other sources. Efforts are ongoing to restore the crucial seagrass beds, especially along the state’s East Coast where the problem is most acute.

Dealing with the long-term pollution and water quality issues will take much more time and effort, officials have said.

Still, there’s cautious optimism that the lessons learned this first year will make a similar effort envisioned for next winter much smoother and easier to operate, from setting up a command structure to finding refrigerated trucks to carry the lettuce.

"When we begin to ramp up for next winter, we know all these things," said Jon Wallace of the U.S. Fish and Wildlife Service.

Still, sick and dead manatees are still being spotted, mostly by people who see them in Florida waters and call an FWC hotline to report them. Dozens of rescued manatees are being cared for at SeaWorld in Orlando, which announced an expansion of its manatee facilities Tuesday.

On completion by July, SeaWorld said it will add a three-pool, 200,000-gallon (757,000-liter) complex that also includes a new lift floor to an existing pool. SeaWorld says it will be able care for 60 ill manatees at a time once finished, the largest capacity in the U.S.

"That larger space, together with our sizable, highly specialized and experienced manatee care team means that we are able to mobilize quickly and effectively to help save the lives of these animals and in doing so help save the species from extinction." said Jon Peterson, vice president of Zoological Operations at SeaWorld in Orlando who works closely with the rescue effort.

Manatees are also being cared for at other aquariums and zoos, including the Georgia Aquarium in Atlanta. The Clearwater Marine Aquarium, meanwhile, announced it will construct new manatee rehabilitation pools and will invest in a $10 million manatee hospital being financed by donations.

Anyone who sees a distressed or dead manatee should call FWC’s wildlife hotline at 888-404-3922.