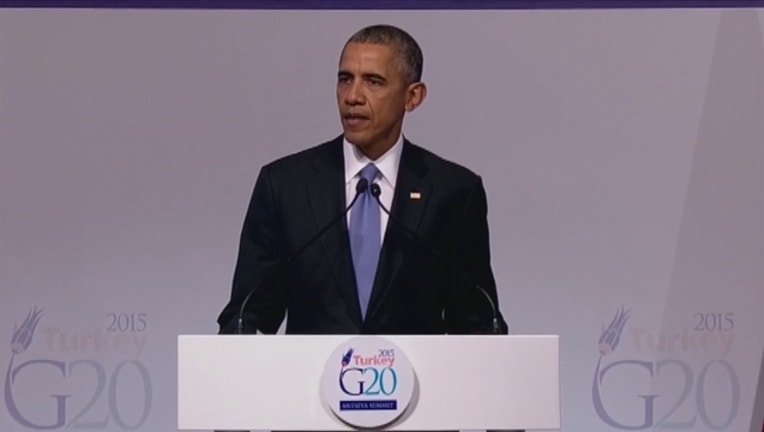 ANTALYA, Turkey (AP) — President Barack Obama on Monday conceded that the Paris terror attacks were a "terrible and sickening setback" in the fight against the Islamic State, but forcefully dismissed critics who have called for the U.S. to change or expand its military campaign against the extremists.

"The strategy that we are putting forward is the strategy that is ultimately is going to work," Obama said during a news conference at the close of two days of talks with world leaders. "It's going to take time."

The president grew irritated amid repeated questions about whether he had underestimated the strength of the Islamic State. He said most of his critics are simply "talking as if they're tough" and offering no real ideas. And he brushed aside those who call for sending U.S. ground troops into the region, saying that "would be a mistake" and wouldn't work unless the U.S. was committed to being a permanent occupying force in the region.

"This is not an abstraction," Obama said. "When we send troops in, those troops get injured. They get killed."

While Obama did not single out any of his critics by name, some Republican presidential candidates have called for sending U.S. forces into Syria.

Rather than casting about for a new strategy, Obama said U.S. would intensify its current campaign of airstrikes and arming and training moderate forces. And he called on other nations to step up their involvement in the fight against the extremists.

The president also announced a new effort to share intelligence with France following the coordinated terror spree across Paris that killed at least 129 people. Officials said the U.S. was already using intelligence to help France identify targets in the flurry of airstrikes France launched against the Islamic State's stronghold in Syria following the attacks.

While officials say the U.S. had been aware of the Islamic State's desire to strike targets outside the Middle East, Obama said he had not been briefed on any intelligence that indicated an attack in Paris was likely.

"I'm not aware of anything that was specific," he said.