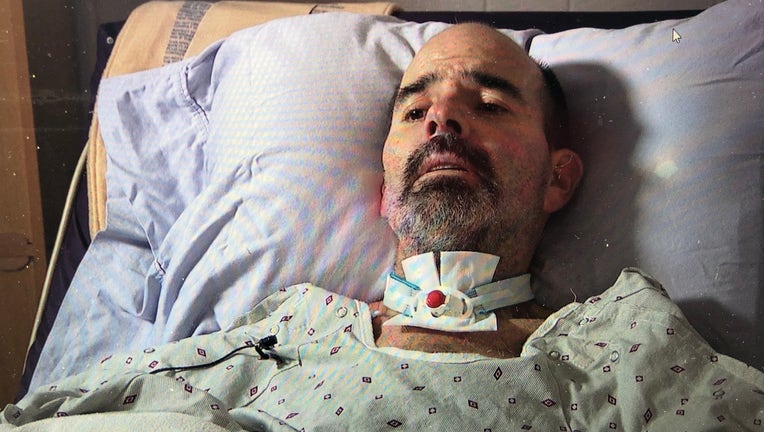 OAK HILL, Fla. - Joel Tatro says he tries his best to stay positive. It’s not so easy for him given the circumstances over the last nine months.

“This changed my whole life. I was usually a guy that never stopped moving. Working, doing other stuff. Now, I have nothing,” Joel said.

He and his wife owned their own small business and spent their spare time riding motorcycles, hunting and fishing.  Now, they can't do any of that.  The 48-year-old is confined to a home hospital bed, unable to move his arms and legs.

Joel Tatro says he tries his best to stay positive. It’s not so easy for him given the circumstances over the last nine months.

He misses the big things and the little things he used to take for granted.

“Little stuff like itching your eye or scratching your cheek, you can’t do it,” Joel said.

On February 16, Joel, his family and some of his sons’ friends were hanging out by their backyard fire pit when deputies say some teenagers show up uninvited.

“That boy just did bad, real bad, doing what he did,” Joel said.

He recalls asking them to leave.

“Get off my property, please, cordially,” Joel said.

He says that was met by a push from a 15-year-old and that teen’s gun.

“If Joel had not grabbed that gun, he would have shot him in the head point-blank,” Lisa said.

Joel says he remembers being pushed and shot and then being airlifted to the hospital in a helicopter.

“It’s been a hard nine months since the day this happened. I don’t even remember the first three months in the hospital,” Joel said.

He was in the hospital until September.

Joel has been unable to work since the day he was shot. Lisa is now is fulltime caretaker.

The small business they owned and worked together is no more. The couple moved and now lives in one room of a friend’s home because they could no longer afford the rent for their own home.

The Tatro’s say they have been pretty much contained to the room in the friend’s home 24 hours a day, seven days a week because they cannot afford the specialized wheelchair Joel now needs to keep him safe while getting around.

Lisa says they were quoted $30,514.12 for that chair, and it will be a necessity to get that chair so he can get to and from physical therapy once all of his wounds are healed.

“I’m hoping to get more a little out of my left arm. If I could scratch my forehead, that would be a big deal, or feed myself," he said.

A family friend started a GoFundMe account for the Tatro’s to raise money for that wheelchair.

While it won’t get Joel back on his motorcycle, hunting or fishing again, he says it’s his best shot of getting him out of his home hospital bed.

“We’re prideful people. We like to do things ourselves, but this is too big for us. We have to have help. I can’t do this all alone. I’ll sell my soul to the devil to get him a chair - something that he needs,” Lisa said.

James “Buddah” Powell, who’s now 16, is charged with attempted murder in the shooting.

Court records show he will be tried as an adult. His next court date is scheduled for January.