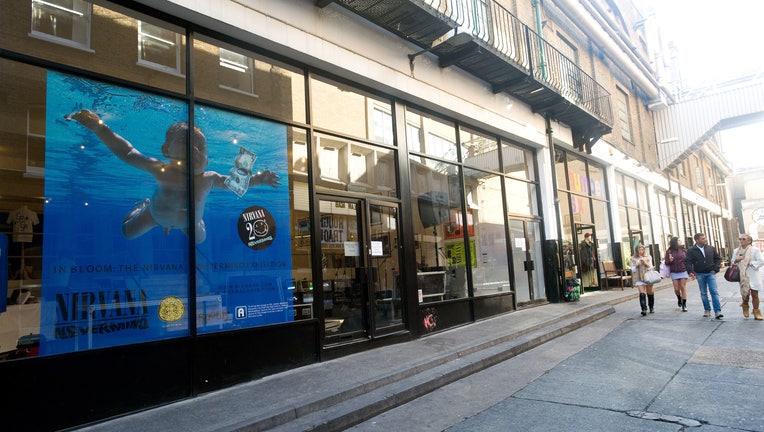 A general view of 'In Bloom: The Nirvana Exhibition', marking the 20th Anniversary of the release of Nirvana's Nevermind album, at the Loading Bay Gallery on September 13, 2011 in London, England. (Photo by Samir Hussein/Getty Images)

A federal judge has once again dismissed a lawsuit filed by the man who appeared nude at 4 months old in 1991 on the cover of Nirvana’s "Nevermind" album.

U.S. District Judge Fernando Olguin ruled Friday that the statute of limitations has expired for 31-year-old Spencer Elden, FOX LA reports, but his lawyer has filed an appeal. The lawsuit, filed in August 2021 in federal court in California, said that Elden had suffered "lifelong damages" as the band and others profited from the ubiquitous image of him naked underwater appearing to swim after a dollar bill on a fish hook.

The suit was seeking at least $150,000 from each of more than a dozen defendants, including the Kurt Cobain estate, surviving Nirvana members Krist Novoselic and Dave Grohl and Geffen Records.

Elden also wants any new versions of the album altered.

"If there is a 30th anniversary re-release, he wants for the entire world not to see his genitals," Margaret Mabie, one of his attorneys, said when the suit was filed.

RELATED: Dave Grohl breaks down in tears while performing 'Times Like These' at Taylor Hawkins tribute concert

When the cover was shot, Nirvana was a little-known grunge band with no sense they were making a generation-defining album in "Nevermind," their first major label release, whose songs included "Smells Like Teen Spirit," "Come as You Are" and "Lithium."

Watch 16-year-old Oliver Shane Hawkins play with his late father’s band at a tribute concert for Taylor Hawkins in London.

Elden’s father was a friend of the photographer, Kirk Weddle, who took pictures of several swimming babies in several scenarios at the Rose Bowl Aquatic Center in Pasadena, California.

"Cobain chose the image depicting Spencer — like a sex worker — grabbing for a dollar bill that is positioned dangling from a fishhook in front of his nude body with his penis explicitly displayed," the lawsuit says.

Elden has recreated the image several times, always with clothes or swim trunks on, for anniversaries of the album’s release, and he has expressed mixed feelings about it in interviews that have grown increasingly negative through the years.

He told the New York Post in 2015 that it was "cool but weird to be part of something so important that I don’t even remember."

He added, "It’d be nice to have a quarter for every person that has seen my baby penis."