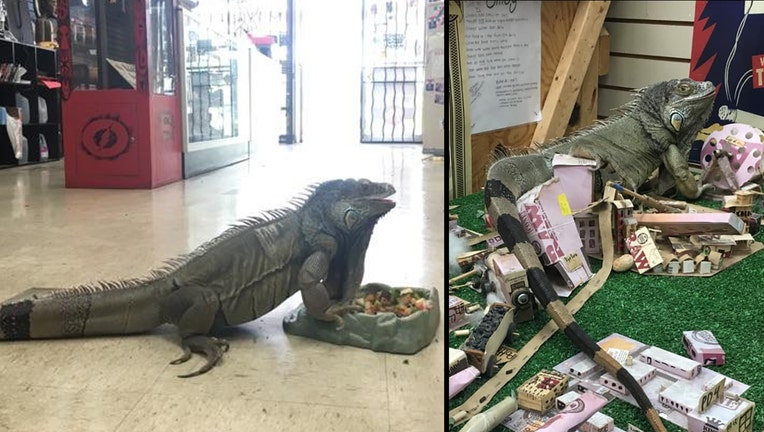 SANFORD, Fla. - There may be a new clue in the case of a missing iguana in Sanford.

Smog, a 6-foot-long iguana, is missing.

"I haven't slept,” Smog’s caretaker Matthew Bernstein said. “I know [the employees] are having trouble, too, and a lot of tears have been shed."

The reptile disappeared from his home at Pipe Eyes smoke shop in Sanford the day after Christmas.

Bernstein says he believes someone stole Smog. He’s been searching for him ever since.

He got a huge lead. There were photos posted on a Sanford pet shop’s Facebook page not long after the iguana disappeared.

They show someone holding a big iguana who looks a lot like Smog.

"Somebody saw it,” Bernstein said. “Recognized it, immediately tagged us and posted a link to it on the post for missing Smog."

Bernstein believes he recognizes the man in the photos.

"I know that he's been a customer here before,” Bernstein said. “So, I know he knows that's our iguana."

Bernstein said his store has been in contact with the pet store.

"They knew immediately this was an issue,” Bernstein said. “That there was a police investigation. They called the police and the police came down and they turned over all the evidence."

We stopped by that pet store to talk to the owners. They wouldn't say anything because of the on-going police investigation.

The smoke shop employees are hoping the photo will be the clue that cracks the case.

"If he does not bring Smog back and the police are the ones that apprehend him - and he knows that we are looking for him - we will prosecute to the full extent of the law,” Bernstein said. “There's no doubt about that, and if any harm has come to Smog, then that's animal abuse."

Pipe Eyes is offering a $1,000 reward for information leading to Smog's whereabouts.

The shop said they just want whoever took him to return him safely.