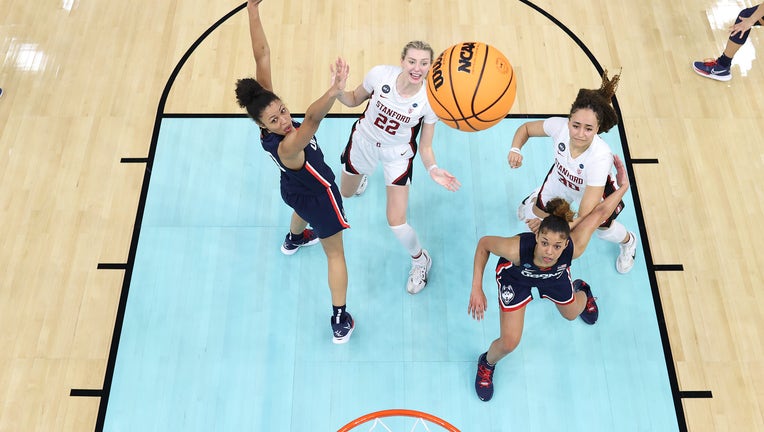 MINNEAPOLIS, MINNESOTA - APRIL 01: Cameron Brink #22 of the Stanford Cardinal shoots the ball over Olivia Nelson-Ododa #20 of the UConn Huskies during the 2022 NCAA Women's Final Four semifinal game 2 at Target Center on April 01, 2022 in Minneapolis

MINNEAPOLIS (AP) - It’s one of the most remarkable records in sports. Geno Auriemma and his UConn Huskies are 11-0 in NCAA championship games.

The Huskies will look to continue that run when they face South Carolina for the women’s basketball title on Sunday night.

Auriemma always downplays his role in the undefeated mark saying it’s easy when you have the best players.

This is South Carolina’s second appearance in the title game. Dawn Staley’s squad won the championship in 2017. The Hall of Famer knows how difficult it is to win one, let alone 11.

Rich 'BD' Salgado talks about the NCAA's temporary name, image, likeness policy for student athletes with NewsNOW's Pilar Arias. The NCAA approved the interim 'NIL' policy, which means athletes will have the opportunity to earn money from endorsements, sponsorships, social media, and more as soon as July 1. All three NCAA divisions agreed to adopt the policy, the NCAA announced on Wednesday.

The Gamecocks have been the best team in the country all season, going wire-to-wire as No. 1 in the AP Poll. The two teams played back in November in a tournament in the Bahamas. South Carolina came away with a 73-57 win, outscoring the Huskies 16-3 in the fourth quarter.

"The Bahamas game was eons ago," Staley said. "What did we take it from it? We’re going to watch it a little bit because I liked how we were defending, and we can compare what it looks like from back in November to what it looks like now. I think we’ve gotten better, but we did a pretty good job in the Bahamas."

Both teams have improved since that early season meeting. They both have major star power with the Gamecocks led by AP Player of the Year Aliyah Boston and the Huskies by last season’s award winner Paige Bueckers.

"I don’t think it’s a stretch to say that she might be the hardest person in America to guard. She scores if there’s one, two, three, four people on her," Auriemma said of Boston. "It doesn’t matter. She’s able to carve out the space she wants. She gets the ball on the rim whenever she wants. She rebounds whichever ball she goes after. She just has a knack. How do we guard her? I don’t know. I’m open for suggestions."

Bueckers is looking to be the first UConn player to win a championship in her home city. The sensational sophomore grew up about 10 miles from the Target Center where the Final Four is being played.

"Obviously when I was a little kid at the gym and the park I dreamt of these moments playing in March Madness, playing in the national championship game. To do it 10 minutes away from where I live is super crazy to me to get here," Bueckers said. "That’s why I think this is a story only God could write. It’s something that he made possible with extremely hard work, dedication and faith. I’m just super grateful for all the faithfulness he has in me."

She got a loud cheer during the open practice from the thousands of fans watching their hometown star.

Kelly Faris was the only other UConn player to play a Final Four in her hometown. The Huskies lost in the Final Four in Indianapolis in 2011.

Both South Carolina and UConn have been stalwarts on defense all season long. The Gamecocks were third in the country, allowing just 50.5 points per game. They’ve been even better in the NCAAs in holding opponents to just 44.8 points.

"I think it’s just a mentality to have every single game," South Carolina’s Brea Beal said. "You can’t just turn it on and turn it off when you choose to. ... Especially now, you just have to lock in and know what your job is to do offensively and defensively."

UConn only gives up 54.7 points a game this season. Throw out the 91-87 double-overtime win over N.C. State in the Elite Eight and the Huskies haven’t allowed more than 60 points in a game since their most recent loss against Villanova on Feb. 9.