House Speaker Nancy Pelosi arrived in Taiwan, making her the highest ranked U.S. official to visit the island in 25 years. The move comes amid warnings from China, who claims Taiwan is part of its territory, that a visit would result in "resolute and strong measures" in response. President Joe Biden did not specifically tell Pelosi not to go, saying the decision was ultimately hers to make.

Also on Saturday, North Korea called Pelosi "the worst destroyer of international peace and stability," accusing her of inciting anti-North Korea sentiment and enraging China during her Asian tour.

Taiwan's armed forces issued an alert, dispatched air and naval patrols around the island, and activated land-based missile systems in response to the Chinese exercises, the Ministry of National Defense said.

China's Ministry of Defense said in a statement Saturday that it had carried out military exercises as planned in the sea and airspaces to the north, southwest, and east of Taiwan, with a focus on "testing the capabilities" of its land strike and sea assault systems.

China launched live-fire military drills following Pelosi’s trip to Taiwan earlier this week, saying it violated the "one-China" policy. China sees the island as a breakaway province to be annexed by force if necessary, and considers visits to Taiwan by foreign officials as recognizing its sovereignty.

Taiwan's army also said it detected four unmanned aerial vehicles flying in the vicinity of the offshore county of Kinmen on Friday night and fired warning flares in response. 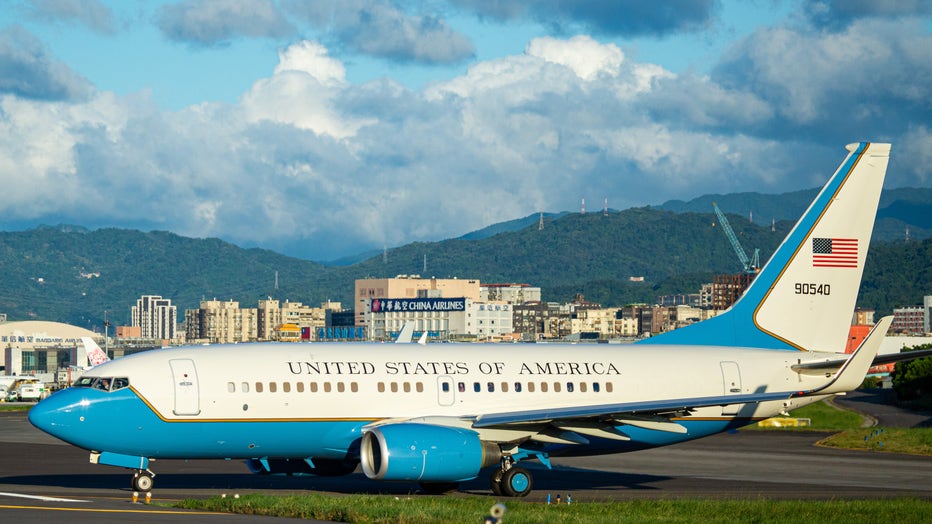 The four drones, which Taiwan believed were Chinese, were spotted over waters around the Kinmen island group and the nearby Lieyu Island and Beiding islet, according to Taiwan’s Kinmen Defense Command.

Kinmen, also known as Quemoy, is a group of islands only 10 kilometers (6.2 miles) east of the Chinese coastal city of Xiamen in Fujian province in the Taiwan Strait, which divides the two sides that split amid civil war in 1949.

"I call on the international community to support democratic Taiwan & halt any escalation of the regional security situation," she added.

The Chinese military exercises began Thursday and are expected to last until Sunday. So far, the drills have included missile strikes on targets in the seas north and south of the island in an echo of the last major Chinese military drills in 1995 and 1996 aimed at intimidating Taiwan’s leaders and voters.

Taiwan has put its military on alert and staged civil defense drills, while the U.S. has deployed numerous naval assets in the area.

The Biden administration and Pelosi have said the U.S. remains committed to a "one-China" policy, which recognizes Beijing as the government of China but allows informal relations and defense ties with Taipei. The administration discouraged but did not prevent Pelosi from visiting.

China has also cut off defense and climate talks with the U.S. and imposed sanctions on Pelosi in retaliation for the visit.

Pelosi said Friday in Tokyo, the last stop of her Asia tour, that China will not be able to isolate Taiwan by preventing U.S. officials from traveling there.

Pelosi has been a long-time advocate of human rights in China. She, along with other lawmakers, visited Beijing’s Tiananmen Square in 1991 to support democracy two years after a bloody military crackdown on protesters at the square. 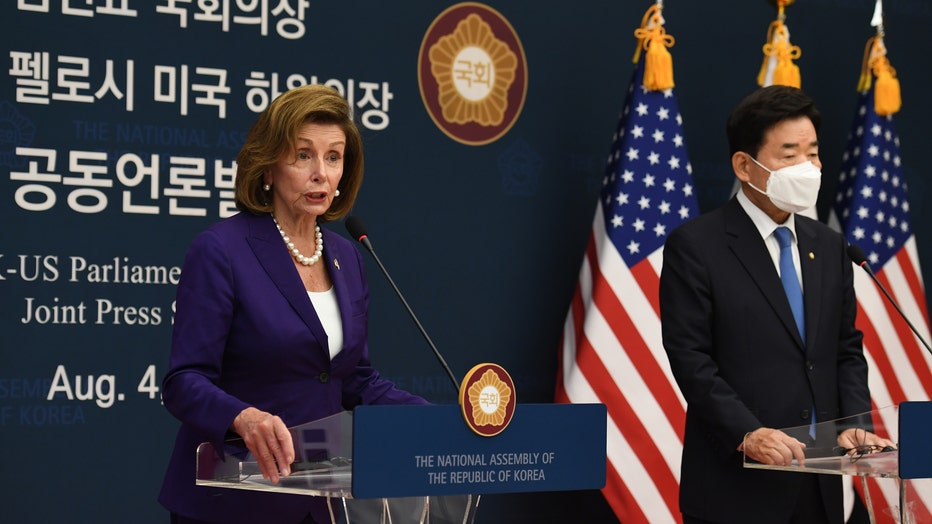 North Korea on Saturday called Pelosi "the worst destroyer of international peace and stability," accusing her of inciting anti-North Korea sentiment and enraging China during her Asian tour earlier this week.

Pelosi traveled to South Korea after visiting Taiwan, which had prompted China to launch military exercises including missile strike training in waters near the self-governed island. China views Taiwan as part of its own territory to be annexed by force if necessary.

While in South Korea, Pelosi visited a border area with North Korea and discussed the North’s nuclear program with South Korean National Assembly Speaker Kim Jin Pyo. According to Kim, the two agreed to support their governments’ push for denuclearization and peace on the Korean Peninsula based on strong, extended deterrence against the North and diplomacy.

On Saturday, Jo Yong Sam, director general at the North Korean Foreign Ministry's press and information affairs department, slammed Pelosi over her visit to the border and discussion of anti-North Korean deterrence.

"Pelosi, who had come under a volley of due criticism from China for destroying regional peace and stability by visiting Taiwan, stirred up the atmosphere of confrontation" with North Korea during her stay in South Korea, Jo said in a statement carried by state media.

"It would be a fatal mistake for her to think that she can go scot-free in the Korean Peninsula," Jo warned. "The U.S. will have to pay dearly for all the sources of trouble spawned by her wherever she went."

Pelosi’s visit to the Joint Security Area at the Korean border on Thursday made her the highest-profile American to go there since then-President Donald Trump visited in 2019 for a meeting with North Korean leader Kim Jong Un. 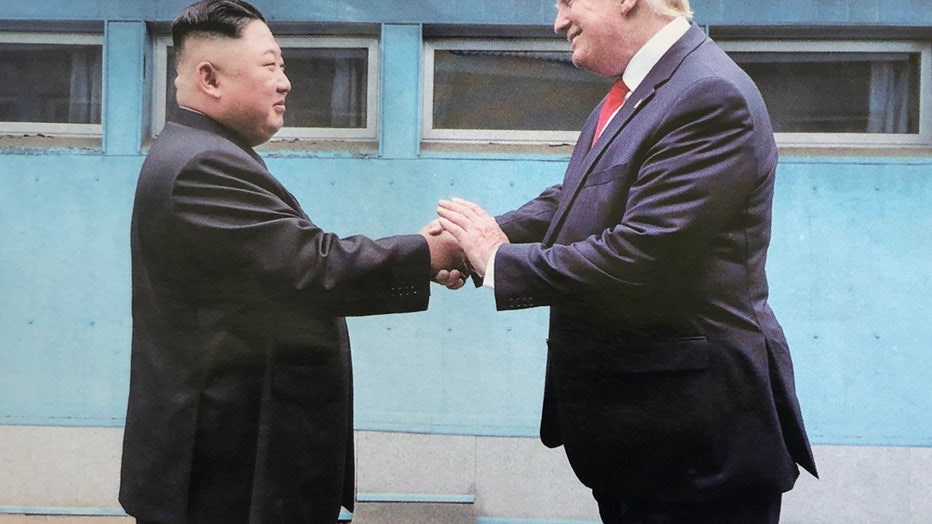 Located inside the world’s most heavily fortified border, the area is jointly controlled by the American-led United Nations Command and North Korea. U.S. presidents and other top officials have previously traveled to the area to reaffirm their security commitment to South Korea in times of animosities with North Korea.

During her JSA visit, Pelosi didn’t make any strong public statements against North Korea. She uploaded several photos from the JSA on Twitter and wrote: "We conveyed the gratitude of the Congress and the Country for the patriotic service of our servicemembers, who stand as sentinels of Democracy on the Korean Peninsula."

Pelosi said in a separate statement that she and Kim, the South Korean parliamentary speaker, reaffirmed "our commitment to the U.S.-Korea alliance to advance security, strengthen our supply chains, and increase trade and investments that are beneficial to both our nations."

RELATED: Pelosi says US will not abandon Taiwan despite warnings from China

North Korea has said it would not return to denuclearization talks and instead focus on expanding its nuclear program unless the United States drops its hostile policies, in an apparent reference to U.S.-led international sanctions on the North and its regular military drills with South Korea.

After Pelosi visited Taiwan and reaffirmed Washington’s commitment to defending democracy on the self-governing island, North Korea on Wednesday issued a statement berating the U.S. and supporting China, its main ally and biggest aid benefactor.