Jennifer Martinez had her dream proposal over the weekend as she said that her now-fiancé got down on one knee while visiting Walt Disney World.

LAKE BUENA VISTA, Fla. - Jennifer Martinez had her dream proposal over the weekend as she said that her now-fiancé got down on one knee while visiting Walt Disney World.

Jennifer spoke to FOX 35 about the beautiful moment, telling the news station "it still feels surreal. This past Saturday will forever be one of my most memorable days."

She explained she met her then-boyfriend but now-fiancé, Carlos Lara, three years ago.

"I was a single mom and honestly, I was getting to the point where I thought it was never going to be," she said in regards to getting married. However, her first date with Carlos changed everything. "We had pizza at a small hole-in-the-wall restaurant. I laughed a lot that night and I texted him the next day to tell him I had a lot of fun and we should do it again."

MORE NEWS: Disney to stream new firework shows ahead of 50th anniversary: How to watch

Jennifer Martinez had her dream proposal over the weekend as she said that her now fiancé got down on one knee while visiting Walt Disney World.

They continued to go on dates and Jennifer said that Carlos was all about details from the start. For example, she said that "we talked about hot fries on our first date and while some might show up with flowers on a second date, Carlos showed up with hot fries. If that doesn’t scream ‘keeper.’"

For his birthday one year, Jennifer said that she got Carlos a Walt Disney World annual pass. They have visited the parks regularly ever since.

"I think he really enjoys it too. Most times we go with my son but sometimes we choose our date days to be at Disney, usually Epcot. Those margaritas in Mexico are pretty amazing," she said.

Turns out that Epcot is a very special place for the two as of Saturday, Carlos took Jennifer to the Italy pavilion inside World Showcase and got down on one knee. A video that captured the moment shows Jennifer smiling, crying, and then saying "yes!" to his hand in marriage.

"We always make a pit stop at Italy because it’s my dream to go to Italy," Jennifer explained. The two of them actually had a trip planned to visit the actual country but it was canceled during the COVID-19 pandemic. "This is where my dream proposal happened." 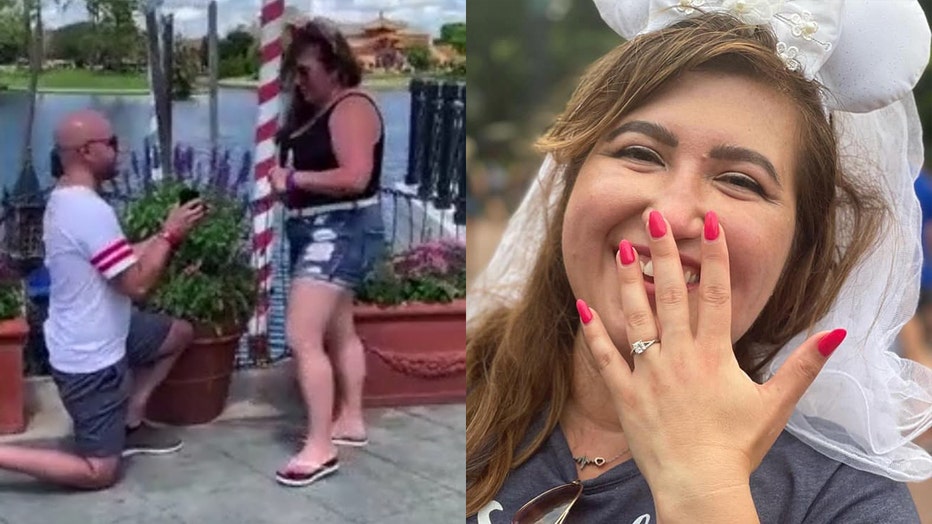 That was not it though. One of Jennifer’s best friends, who is currently working as a COVID-19 nurse in Texas, surprised her during the special moment. Other friends were also there.

"When I saw my friends jump out, I was speechless and filled with so much emotion. We have all talked about how much I wanted that day to come, so for them to be there as witnesses was one of the most special things," Jennifer said.

And one more small surprise for Jennifer: Her friend made sure to play Jennifer and Carlos’ song for the heartwarming moment along World Showcase Lagoon.

As for the future, no wedding plans have been made yet but Jennifer is looking forward to getting things set in stone.

"While my Pinterest has been planning for this day for years, nothing is set," she said. "I have a Mexican background and he has a Colombian background, so we hope to have something rich in culture, music, and food."

And the honeymoon? Jennifer said that "Italy is high on our list to visit one day. Hopefully soon, maybe it can be our honeymoon!"