LAKE OF THE OZARKS, Mo. - An Illinois man now holds the Missouri paddlefish state record, and he can thank Mother Nature for some of that title.

Jim Dain snagged a monster 140-pound, 10-ounce paddlefish on March 18 at the Lake of the Ozarks. The latest record breaks the previous record of 140-pounds, 9-ounces set in 2015 on Table Rock Lake.

"We went last year and really didn’t have much luck. But this year was different," Dain said.

The Pittsfield man was on a fishing trip with his family and almost didn’t get the boat out that day because the weather kept changing.

"We fished for two days. The day before on the 17th was beautiful, like 70-something degrees and sunny. We had to get the sunscreen hats out," Dain said.

However, forecasters called for rain on the day of the record catch and later turned into thunderstorms. The skies then cleared, so they decided to go out.

"Paddlefish definitely respond to the weather, and the snaggers know this," said Andrew Branson, a fisheries programs specialist with the Missouri Department of Conservation.

The best time for snagging is when water temperatures have risen to above 50 degrees and after a rain with when stream waterflows have increased.

"Water temperature combined with water flow get the paddlefish up and moving," Branson said.

As a cold front moved in later that day, Dain and his group weren’t having much luck, but they decided to fish for another hour. And that’s when history was made.

"I knew something was on there, but it was so heavy it felt like a tree," Dain said.

It took at least 20-minutes before they ultimately got the fish in the boat. 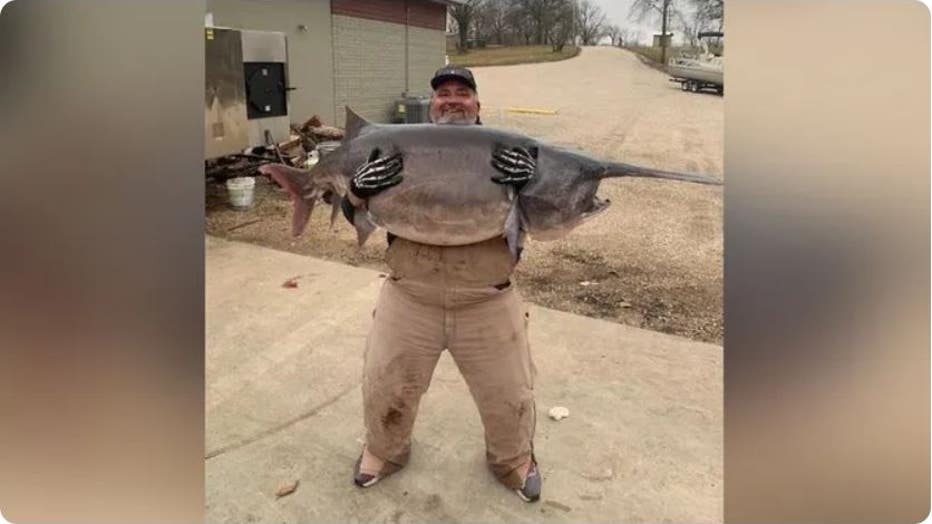 Jim Dain, of Pittsfield, Ill. snagged a monster 140-pound, 10-ounce paddlefish on March 18 at the Lake of the Ozarks, Missouri. (Missouri Department of Conservation)

"You never know what size they are when you snag, but this was heavy. It took a while. It took all three of us to get it into the boat. God was smiling on us," Dain said.

He knew it was a special fish. The paddlefish they caught the day before was 46 pounds. But little did he know they would snag another that was nearly 100 pounds heavier.

When Dain pulled up to the boat ramp, he was greeted by the Missouri state record holder for river carpsucker who was in the area.

"He’s looking at the fish and says to me, ‘Boy, I think you should get that checked out because it could be a state record,'" Dain said.

So what exactly do you do with that much fish? Eat it, of course. The fish yielded about 16 one-gallon bags of meat.

"The filets on it were just massive," Dain said. "We’ve fried it, grilled it and made paddlefish tacos the other night. We’ll be having paddlefish for a while."