LAKE MARY, Fla. - A mother from Upstate New York is in Orlando to search for answers in her son’s disappearance.

"It’s been the most horrifying experience of my life," Vetromile said. "Six months that has felt like six years."

A missing person report filed with the Orlando Police Department said Mathew was staying at Monumental Movieland, a hotel, with his girlfriend. The girlfriend told police the two got into a fight and he left. 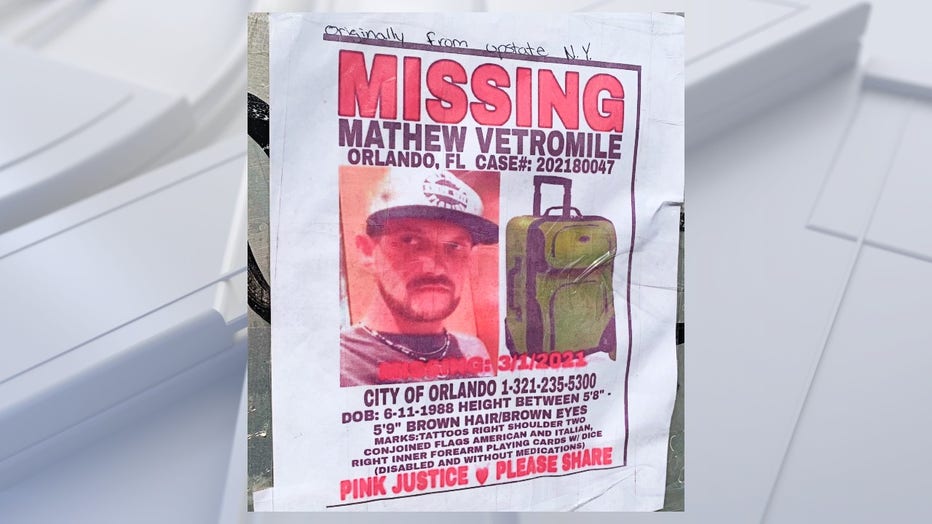 Vetromile said she spoke with her son on the phone just hours before then.

"The phone went dead and I never heard from him again," she said.

Vetromile hasn’t stopped searching for Mathew since then. She lives in Rochester, New York, and has traveled to Orlando for the second time since his disappearance. She’s scoured the area and put up fliers in person and on social media.

"My gut feeling that he’s not calling is because something very, very bad happened here," she said.

Orlando Police said the investigation is active and ongoing. Detectives don’t believe there is any indication of a violent crime, but Vetromile said her son usually calls her daily. She said it’s out of character for Mathew not to be in contact for a prolonged period of time.

"Whoever thinks that they have found a mother who is going to give in, they found the wrong mother because I will not stop," Vetromile said. "No matter if he comes home in the seat next to me, or in a car or a plane next to me, he’s coming home. And that’s my first goal is to bring him home."