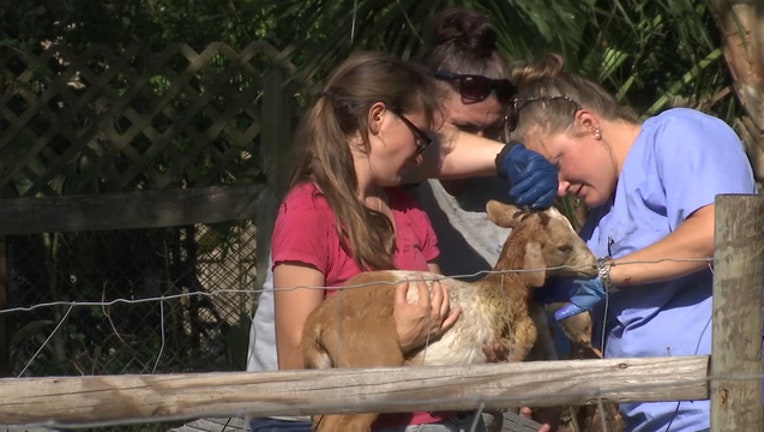 SANFORD, Fla. (WOFL FOX 35) - Seminole County Animal Control is investigating after more than a dozen goats were killed by two pit bulls that got loose.

The owner of the goats says 15 died and she may lose even more. Some of the survivors are barely hanging on.

“These are my goats. These are my family,” Jewett Simpson said. “It just breaks my heart to see so much devastation.”

She says she keeps the goats on her friend Jennifer Moreno’s property near Sanford. Moreno witnessed part of the attack Tuesday morning.

“I was actually walking my dog and noticed one of the goats was crying out so I just came back to see what was going on and two black pit bulls were gnawing off one of the goats ears,” Moreno explained.

She says the dog came from a nearby home and either jumped a fence or climbed under it to get to the goats. The aftermath was hard to stomach.

“It looked like someone dropped a bomb,” said Emilie Parker, who also raises goats and volunteered to help the family.

“Dead animals that were laying around because you can’t move them,” Parker said. “You have to have everything documented. Especially in cases like this.”

Veterinarians have been working hard to help the wounded goats. Simpson says two may need to be euthanized because of their injuries.

Seminole County Animal Control searched for the dogs Tuesday evening and deployed traps. One of the pit bulls has been caught. Officials say the dogs will be quarantined until the investigation is complete.

Officers say they have not been able to reach the owner of the dogs but his ex is cooperating.