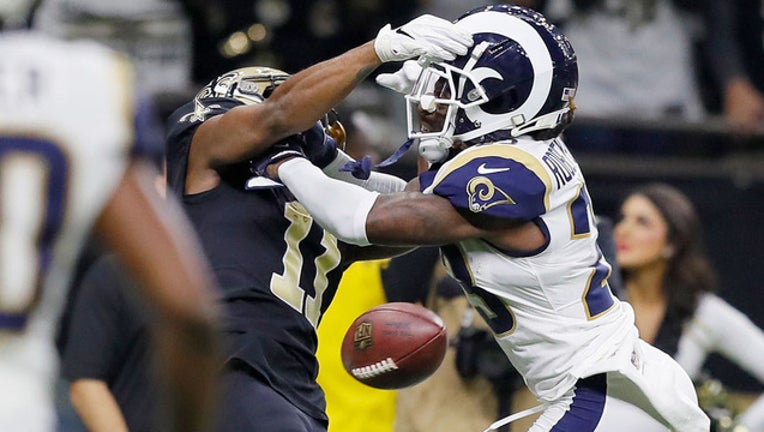 Tommylee Lewis #11 of the Saints drops a pass broken up by Nickell Robey-Coleman #23 of the Rams during the fourth quarter in the NFC Championship game at the Mercedes-Benz Superdome on January 20, 2019. (Photo by Kevin C. Cox/Getty Images)

METAIRIE, La. (FOX 26) - An online petition has started on Change.org calling for a rematch between the Los Angeles Rams and the New Orleans Saints on Sunday.

The petition for the NFC Championship Game rematch is more than halfway to its goal of a million signatures. Click here to view the petition.

"Due to refs’ inability to properly officiate at the game, we the undersigned want a re-match against L.A. on Sunday, Jan. 27. It’s the only fair solution to this travesty of epic proportions," the petition reads in part.

Benson says it's clear the Saints were "unfairly deprived" of a trip to the Super Bowl by the inaction of game officials "charged with creating a fair and equitable playing field."

The Saints owner is referring to officials' decision not to call a penalty on Rams defensive back Nickell Robey-Coleman for his early and high hit on Saints receiver Tommylee Lewis while quarterback Drew Brees' third-down pass was still in the air.

A penalty would have given the Saints a first down inside the Rams 10-yard line with about 1:45 left and allowed New Orleans to run out most of the remaining time left before trying a go-ahead field goal.

Instead, about 1:41 remained when the Saints took their last lead, and the Rams came back to win in overtime.

Benson has been the sole owner of the Saints since her husband, Tom, died last March.