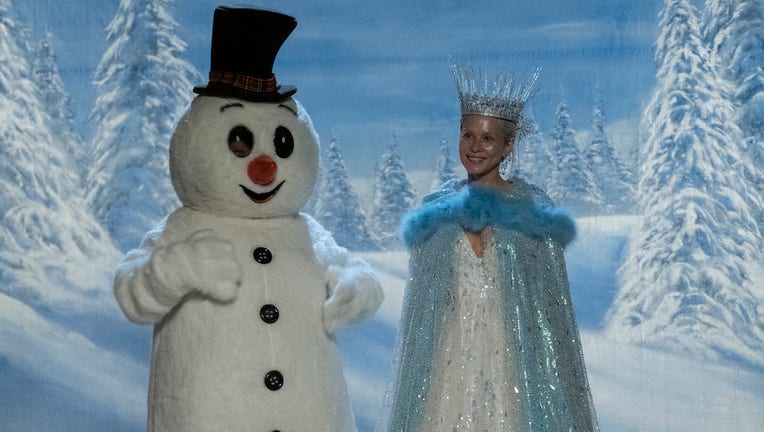 CHICAGO - Welcome back to "Monarch" recaps! In this week’s episode, "Death and Christmas," the Romans put on their annual Family Christmas special, while dark secrets bubble to the surface. Miss a week? You can read our recaps and watch On Demand, on FOXNow or on Hulu. This television station is owned by the FOX Corporation.

Break out the egg nog and hang up the stockings because it’s time for Christmas in July... in October! Apparently one of the Roman family’s many annual traditions includes hosting an old-fashioned Christmas TV special they film each summer. And as a fan of bizarre holiday programming, your recapper couldn’t be more thrilled! Gigi (Beth Ditto) in a snowman costume? Nicky (Anna Friel) as an ice queen? A rebellious performance of Lady Gaga’s "Born This Way"? What more could you ask for?!?

Of course, this being "Monarch," the Romans’ fake white Christmas comes with a side of some very real blackmail. And that’s not the only source of drama this week. While things get an icy makeover on the Romans’ wintery soundstage, they heat up in the romance department. From a burgeoning young couple to a fake PR date to not one but two potential love triangles, the romantic ties of "Monarch" get more complicated by the week. And that makes "Death and Christmas" the perfect gift in any season.

RELATED: ‘Welcome to Flatch’ is back! Here’s what you missed in the premiere 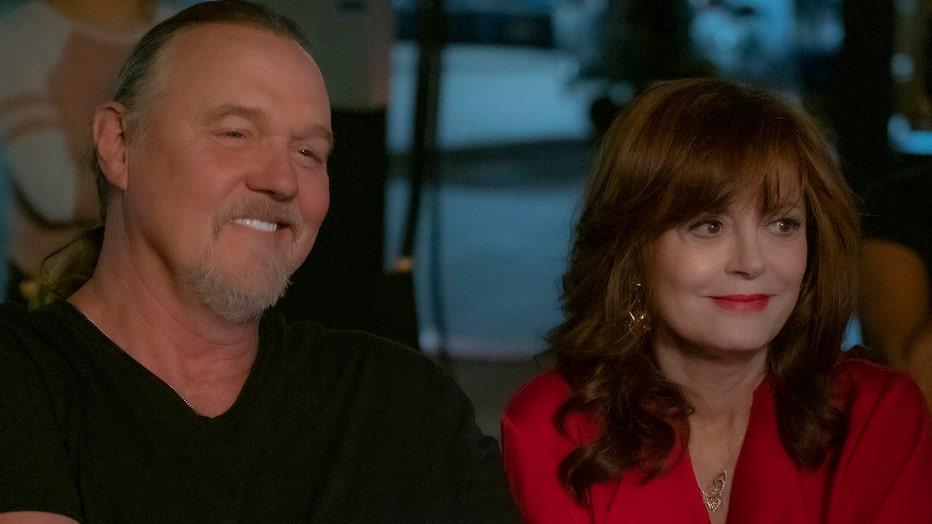 Some quick backstory: It turns out that Dottie (Susan Sarandon) loved Christmas so much, she wanted to celebrate it twice a year. So she insisted on throwing a full-on fake Christmas celebration when her family filmed their annual Christmas special each July. And though this is the first Fake Christmas without Dottie, the Romans keep the tradition alive — even as they bristle against some of the specials more, er, old-fashioned elements. ("This show is so dated, all we’re missing is VCRs and re-elect Reagan spots," Gigi snarks.)

WATCH FREE ON TUBI: Susan Sarandon in the holiday film "Noel" — get the app

But putting on a flawless special is tricky when Nicky and Gigi are still at each other’s throats over last week’s rodeo incident, where Nicky performed their mom’s song before Gigi could — apparently earning herself a Spotify number one hit in the process. It doesn’t help that Gigi is feeling insecure about getting shoved into kitschy holiday costumes just as she’s trying to launch herself as an honest, authentic country star. 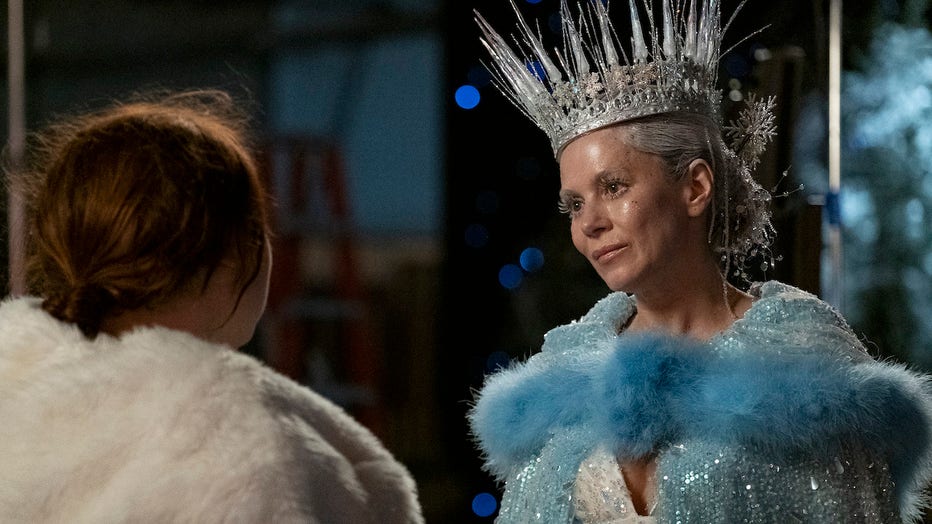 Nicky, meanwhile, has problems of her own: Not only does her husband Clive (Adam Croasdell) blackmail her about her involvement with Dottie’s death, he’s also scoring positive press for his "hot new romance." Eager to ensure Nicky doesn’t come across as pathetic and unable to move on, her friend/publicist Carineh (Reshma Shetty) suggests that Nicky hard launch a new romance of her own. And that means turning her casual fling with hot young singer Wade Stellings (Callum Kerr) into an "exciting yet still wholesome and aspirational" relationship — all via their publicists, of course.

Only it turns out Wade doesn’t need much convincing. You see, he’s had a crush on Nicky since he had her poster hanging up in his dorm room, and he’s more than ready to go all-in on a relationship with her. Yet though the two have undeniable chemistry on a viral sensation karaoke performance of Lady A’s "Need You Now," does Nicky want to date someone who can only see her as their perfect fantasy dream girl? Or might she be more drawn to someone like music producer Jamie Burke (Damon Dayoub), who sees her for who she actually is? Looks like "Monarch" has another love triangle brewing.

Keeping it in the family

Speaking of love triangles: In what has to be one of the wildest-ever solutions to an interfamily cheating situation, Nicky helps Luke (Joshua Sasse) and Kayla (Meagan Holder) come up with a plan to cover-up their unintended pregnancy. Kayla will ask Gigi to have another baby and suggest they use Luke as the sperm donor. 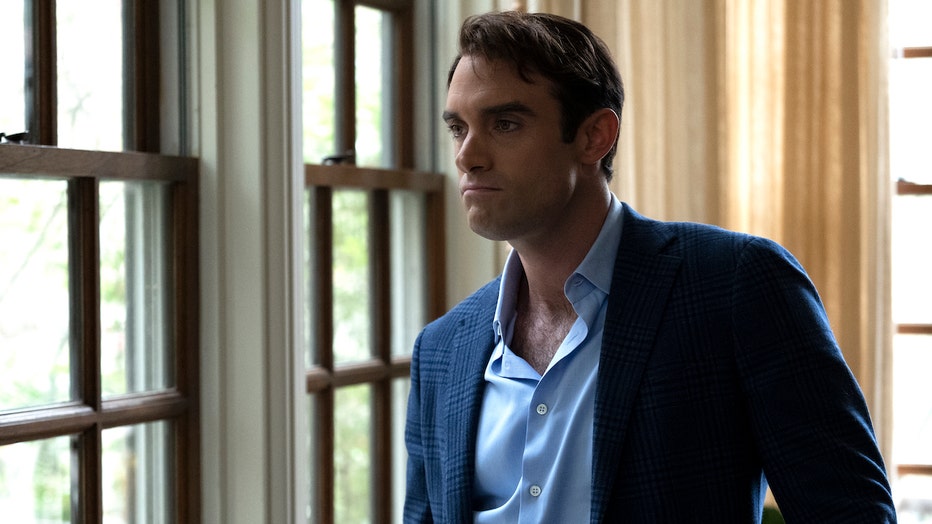 Remarkably enough the plan works — at least once Kayla gives Gigi a tough-love pep talk about claiming her power within her larger-than-life family. Now let’s just hope Gigi doesn’t do the math when it comes to calculating Kayla’s due date...

Still, one of the nicer elements of this storyline is that it demonstrates how Nicky and Gigi are still trying to look out for one another, even as their country music rivalry heats up. For her part, Gigi even pauses the feud long enough to give Nicky some empowering advice about her dating life. We love to see it!

WATCH FREE ON TUBI: Jane Fonda, Lindsay Lohan and Felicity Huffman are family in "Georgia Rule" — get the app

We also love to see the burgeoning romance between Ace (Iñigo Pascual) and Ana Phoenix (Emma Milani), which isn’t nearly as scandalous as her mom Catt (Martha Higareda) fears. On a show with so much drama, it’s nice to have a wholesome teen romance in the mix.

In fact, even though a lot of this episode’s storylines seem destined to blow up in the future (especially the fact that Luke is clearly still in love with Kayla), "Death and Christmas" mostly keeps things on the lighter, more positive side this week. (With a few notable exceptions we’ll highlight in "Speculation Corner.") After all, nothing inspires a family to put aside their differences and come together like Fake Christmas! 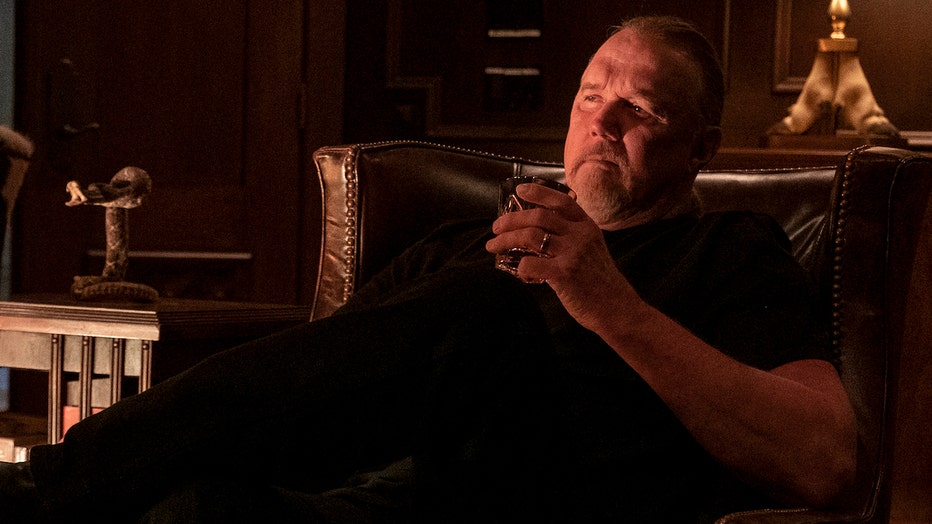 Onto the "Death" side of this episode’s title: Albie tries to meet up with Dottie’s blackmailers, only for them to leave him a note that reads "This is all your fault." He immediately falls into a guilt spiral, certain the note means Dottie was paying money to ensure his decades-ago affair with a woman named Rosa never became public knowledge. But it turns out the truth is far, far darker than that.

After not much coercing, Albie gets Dottie’s sister Nellie (Faith Prince) to reveal that the mysterious barn fire all those years ago wasn’t an accident after all. Instead, young Dottie (Eva Amurr) started the fire to burn Rosa alive. Yikes!

To be fair, it feels like there’s still more to learn about this sordid tale. (And can we totally trust Nellie’s word when it comes to her sister?) But right now, it paints a grim portrait of our joy-inspiring, Christmas-loving Dottie.

Also grim: Those murderous flashfowards — which are now just 6 weeks away! While Luke stages a scene to throw off the cops, a tearful Ace tells Nicky he saw the whole thing. Let’s hope trauma therapy is another Roman family tradition.

Best musical performance: Don't be a drag, just be a queen

As usual, there are a ton of great musical performances this week, from Nicky and Wade’s electric karaoke performance of Lady A’s "Need You Now" to Albie’s soulful take on John Prine’s "Angel from Montgomery" and Nicky’s rich performance of The Chicks’ "Cowboy Take Me Away." (Not to mention the whole Roman family’s lovely rendition of "Silent Night.")

But nothing can top Gigi’s absolutely surreal, countrified version of Lady Gaga’s "Born This Way." Smashing up a Christmas set while wearing a nutcracker costume and belting out "we are all born superstars"? That’s what TV dramas were made for!

Unlikely Angel (1996): This holiday movie originally aired on CBS, and its formula is simple yet bonkers: Take "It's a Wonderful Life," make Clarence the lead and turn him into a no-nonsense country singer played by Dolly Parton. Then cast Roddy McDowell as Saint Peter, throw in a dash of "Ghost" and call it a day. After Ruby (Parton) dies in a car crash, she learns that thanks to the selfish choices she made in her time on earth, she won't enter the pearly gates if she can't reunite a family torn apart by a tragic loss. So naturally she becomes their housekeeper. Oh, and she sings, of course. Rated G. 91 minutes. Dir: Michael Switzer. Also featuring Brian Kerwin.

"Unlikely Angel" is streaming free on Tubi — get the app