The Minneapolis City Council unanimously approved a $27 million settlement Friday in the civil lawsuit brought by the family of George Floyd. The vote was 13-0. The settlement includes $500,000 to be spent on community efforts near the intersection of 38th Street and Chicago Avenue, which has become known as George Floyd Square.

MINNEAPOLIS (FOX 9) - The Minneapolis City Council unanimously approved a $27 million settlement Friday in the civil lawsuit brought by the family of George Floyd. The vote was 13-0. The settlement includes $500,000 to be spent on community efforts near the intersection of 38th Street and Chicago Avenue, which has become known as George Floyd Square. 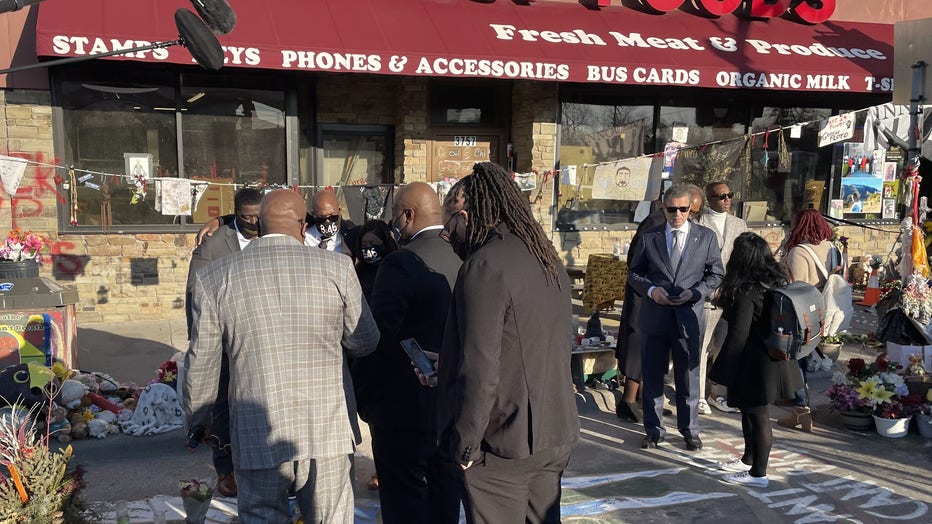 Members of the Floyd family visit the memorial in Minneapolis.

"This historic agreement, the largest pre-trial settlement in a civil rights wrongful death case in U.S. history, makes a statement that George Floyd’s life mattered and by extension that Black lives matter. It sends a message that the unjust taking of a Black life will no longer be written off as trivial, unimportant, or unworthy of consequences."

The civil complaint in the death of George Floyd made note of other cases of excessive force involving the Minneapolis Police Department, including the deaths of Justine Ruszczyk Damond, Jamar Clark and Terrance Franklin. In 2019, Justine Ruszcyk Damond’s family settled a civil lawsuit with the City of Minneapolis for $20 million, making it the largest police misconduct payout in Minnesota history.

The largest publicly-disclosed settlement in a case involving police killings is a $38 million award to the family of a 23-year-old Maryland hairstylist Korryn Gaines.

More recently, the family of Beonna Taylor was awarded a $12 million settlement.

After receiving a record-breaking settlement from the City of Minneapolis, the family of George Floyd will commit funds to make changes at George Floyd Square and help Black-owned businesses in the area.

Money to rebuild 38th and Chicago

During a news conference on Friday, attorney Ben Crump, who has represented the family of George Floyd following his death, announced that $500,000 from the settlement will go towards helping the area around 38th and Chicago in Minneapolis, known as George Floyd Square.

The family of George Floyd visits the memorial in Minneapolis.

The intersection, which was the spot where Floyd died, has been turned into a makeshift memorial and blocked off to traffic since last May. The Floyd family is now pledging to help turn around the struggling neighborhood.

In partnership with the city, the family will donate $500,000 to help nearby businesses along with the memorial.

Crump hopes George Floyd Square will ultimately be a place to reflect on Floyd's death but also a turning point in human history and civil rights.

While George Floyd Square has in some ways become a spot of healing, concerns have been raised about the safety of the area and the ability of the city to maintain order near the memorial -- which has been blocked off and maintained by a self-appointed group of gatekeepers. Those concerns were magnified this past weekend when a man was shot and killed at the memorial site.

Thursday, city leaders said they were still working to find a respectful way to reopen the area.

George Floyd’s brother on settlement: I’d give it all back to get George back

George Floyd's brother Philonise Floyd says while George is gone from this world, he's still with him in spirit.

During the news conference on Friday, Philonise Floyd, the brother of George Floyd, admitted that while the death of his brother has been unbelievably painful for him and his family, his brother's death has changed the world.

"I'm going to miss my brother," said Philonise. "But he has made a movement, and everyone is standing with us in solidarity."

Philonise also expressed gratitude for all those who protested after his brother's death and fought to make a difference.

"I want to be able to thank all the supporters, all the protesters for standing, especially during a pandemic," he said. "You put your lives on the line."

"On behalf of all of my family members, I am pleased that this part of our tragic journey to justice for my brother George is resolved.  Although I wasn’t able to physically be with my family for the official announcement of the settlement reached between my family and the city of Minneapolis, I am with them in spirit.

"Our family suffered an irreplaceable loss May 25 when George’s life was senselessly taken by a Minneapolis police officer.  While we will never get our beloved George back, we will continue to work tirelessly to make this world a better, and safer, place for all.

"Going forward, my work as Founder of the George Floyd Memorial Foundation will be a priority both in George’s birthplace of Fayetteville, North Carolina and around the country.

"The purpose of the Foundation is to honor my brother’s memory and legacy as a community-minded volunteer who would truly give the shirt off his back to someone who needed it.

"While our hearts are broken, we are comforted in knowing that even in death, George Floyd showed the world how to live."

The Derek Chauvin trial is underway with jury selection at the Hennepin County Government Center. You can watch those proceedings live at fox9.com/live.