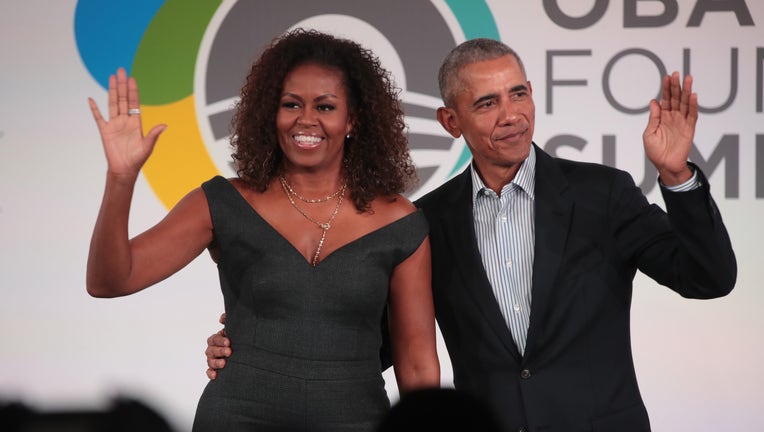 CHICAGO, ILLINOIS - OCTOBER 29: Former U.S. President Barack Obama and his wife Michelle close the Obama Foundation Summit together on the campus of the Illinois Institute of Technology on October 29, 2019 in Chicago, Illinois. The Summit is an annua

Obama claimed she and her husband, former President Barack Obama, faced too much pressure from their “community” to be able to replicate unspecified actions of the Trump administration.

“When we were in the White House, we could’ve never gotten away with some of the stuff that’s going on now,” she said.

“Not because of the public,” she added, “but our community wouldn’t have accepted that. You worked, you did your best every day. You showed up.”

Obama, 56, was joined on the podcast by her mother, Marian Robinson, 83, and her older brother, Craig Robinson, 58, in a discussion that was mostly about parenting, according to The Hill.

Part of the conversation dealt with interactions between African-Americans and police officers – including an incident from the family’s own experience.

Craig Robinson, an executive director with the National Association of Basketball Coaches, talked about having police once accuse him of stealing his own bicycle when he was a young boy.

Robinson said the incident left him disillusioned because he was “always taught that the police are your friends … and they’ll believe the truth.”

He later claimed that the police officers may have acted differently had they known they’d soon be facing his mother, according to People magazine.

Michelle Obama added that many people she knows have had “some kind of incident where they were just minding their own business but living Black, and got accused of something.”

The former first lady added that such experiences among Blacks help explain the unrest that has erupted across the nation since the May 25 death of George Floyd in police custody in Minneapolis.

“The fact that there are people out there that treat us less than, when we’re working so hard to be better than, that’s where the pain comes from,” Obama said. “That’s what these young people are so angry about.”

Earlier this week, some conservatives called on Barack and Michelle Obama to use their connections with the streaming service Netflix to combat the controversial film “Cuties,” which critics say sexualizes and exploits young girls.

The Obamas in 2019 signed a deal said to be worth $50 million to produce content for Netflix, which has been streaming “Cuties.”