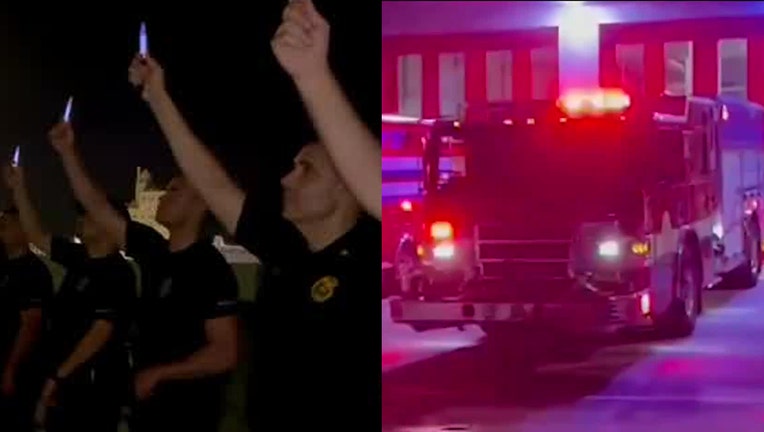 SURFSIDE, Fla. - First responders in South Florida are paying tribute to the victims of the Surfside condo collapse.

Footage from Miami Beach Fire shows firefighters paying tribute by flashing engine lights and the lights of a rescue boat.

The fire department said that they were shining lights "for those who cannot."

Footage from Miami Beach Fire shows firefighters paying tribute by flashing engine lights and the lights of a rescue boat.

In addition, the Miami Beach Police Department also paid tribute to the victims of the Surfside condo collapse in the house before the remaining part of Champlain Towers South was demolished.

The Miami Beach Police Department paid tribute to the victims of the Surfside condo collapse in the house before the remaining part of Champlain Towers South was demolished.

The demolition went "exactly as planned" around 10:30 p.m. Sunday at the site in Surfside, located just north of Miami Beach, according to Miami-Dade County Mayor Daniella Levine Cava.

During the demolition, loud explosions echoed from the structure. Then the building began to fall, one floor after another, cascading into an explosion of dust. Plumes billowed into the air, as crowds watched the scene from afar. 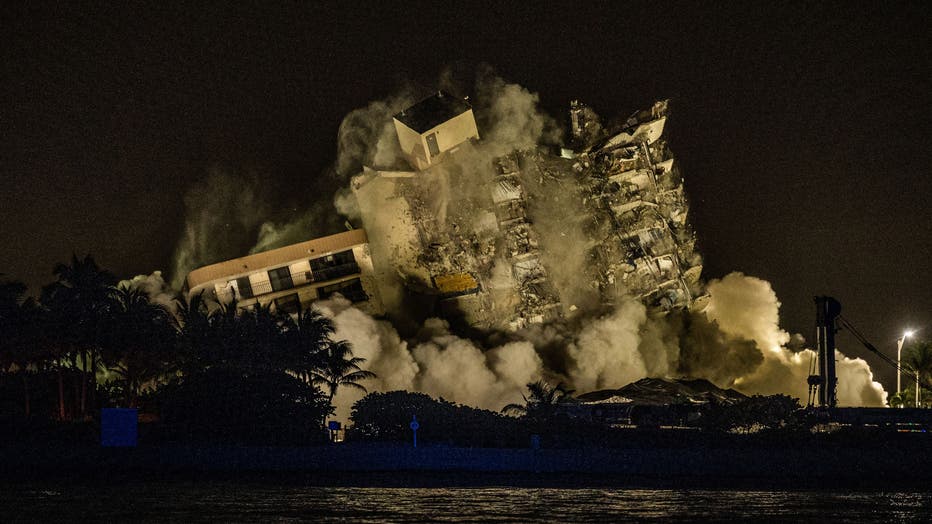 The rest of the Champlain South tower is seen being demolished in Surfside, Florida, north of Miami Beach, late on July 4, 2021. - A controlled explosion brought down the unstable remains of the collapsed apartment block in Florida late on July 4 ahe

"It was picture perfect. Exactly what we were told would happen," Levine Cava said in an interview shortly after the demolition.

Levine Cava expressed relief that the search for victims can now continue, after being suspended on Saturday so workers could begin rigging the damaged but still-upright portion of the partly-collapsed tower with explosives — a precarious operation that could have caused the structure to fail.

"I feel relief because this building was unstable. The building was hampering our search efforts," Levine Cava said.

Rescuers hoped the demolition would open access to parts of the garage area. Once a new pathway into the initial rubble is secure, "we will go back to the debris pile, and we’ll begin our search and rescue efforts," Miami-Dade Fire Chief Albert Cominsky said at a press conference several hours before the remaining wing of the residential high rise came tumbling down.

The remains of 28 people have been recovered from the mound of concrete and twisted steel, while 117 are still missing. No one has been rescued alive since the first hours after the collapse at the Champlain Towers South on June 24, but officials have pledged to keep looking despite the dwindling chance of finding survivors.

Storyful and the Associated Press contributed to this report.