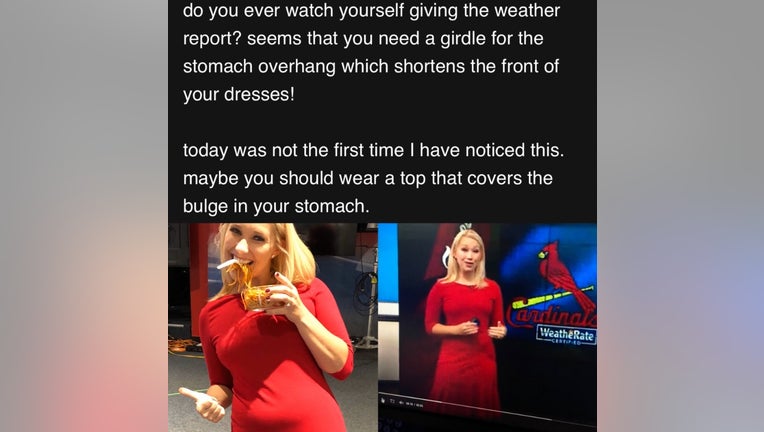 A meteorologist responded to a harsh critic on her Twitter feed, after the viewer was apparently unhappy with the meteorologist’s “stomach bulge” being visible while she was reporting the weather.

Tracy Hinson, a reporter for KSDK News in St. Louis, shared an image of the nasty message she received from a viewer earlier this month.

“Do you ever watch yourself giving the weather report?” the message begins. “Seems that you need a girdle for the stomach overhang which shortens the front of your dresses! Today was not the first time I have noticed this. Maybe you should wear a top that covers the bulge in your stomach.”

Undeterred, Hinson publicly responded to the viewer, identifying her as Mary.

“Dear Mary,” Hinson began, “Yes I do watch my airchecks. NO I will not be strapping myself into a girdle because you don’t like my belly. I like pasta, bread and cheese too much to obsess over my weight. I like my body and that’s all that really matters.”

Since posting the response, Hinson's message has received more than 21,000 likes on the social media platform.

Hinson has also received a lot of support from Twitter.

One reply: “Dear Tracy, I don't know you, nor have I ever seen you on TV. But this tweet has spread beyond your market and I just want you to know that I hope you meant this deep inside and you change nothing. Thank you for this and props to you. I think you are beautiful. Be you.”

“Mary, it’s really easy to criticize from behind a screen, isn’t it?" another reply read. "Perhaps you should focus on Tracy’s accurate forecast and delightful demeanor. Tracy — you are gorgeous. You eat all of the mac and cheese you want.”