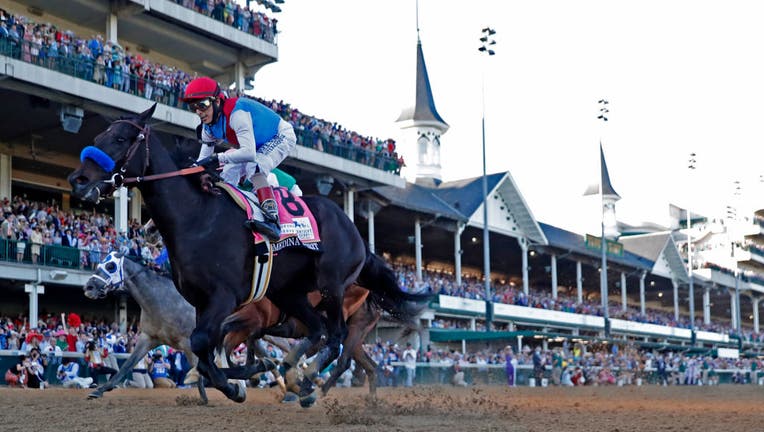 FILE - LOUISVILLE, KY - MAY 01: Medina Spirit (8) ridden by jockey John Velazquez wins the 147th Running of the Kentucky Derby on May 1, 2021 at Churchill Downs in Louisville, Kentucky. (Photo by Brian Spurlock/Icon Sportswire via Getty Images)

Medina Spirit was stripped of the victory in last year’s Kentucky Derby and Mandaloun was declared the winner after a ruling by state racing stewards on Monday.

The since-deceased Medina Spirit tested positive after the race last May for a steroid, betamethasone, that is legal in Kentucky but banned on race day.

Medina Spirit finished half a length ahead of Mandaloun in the race, giving trainer Bob Baffert what was then his seventh Kentucky Derby title. Baffert was subsequently banned for two years by Churchill Downs following the positive test.

Monday’s decision by the Kentucky Horse Racing Commission makes Medina Sprit the second horse in the 146-year history of the race to be disqualified for a banned substance; the first was Dancer’s Image in 1968, a decision that gave Forward Pass the victory. The only other disqualification was in 2019 when Maximum Security was penalized because of interference.

The racing commission also suspended Baffert for 90 days and fined him $7,500 on Monday.

Medina Spirit collapsed and died on Dec. 6 of a heart attack following a training run at Santa Anita less than a month after finishing second in the Breeders’ Cup Classic at Del Mar.