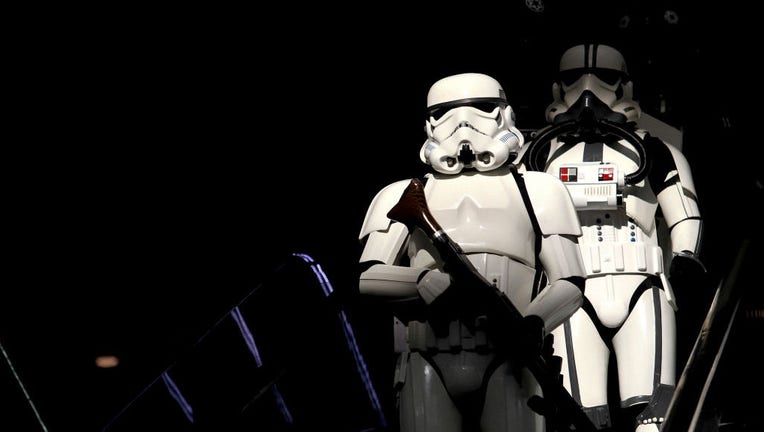 FILE IMAGE - Fans dressed as Stormtroopers from "Star Wars" participate in a gathering to celebrate "Star Wars Day" at the Cineteca of the Universidad Autonoma de Guadalajara in Zapopan, Jalisco state, Mexico, on May 4, 2021. (Photo by ULISES RUIZ/AF

May the 4th, also commonly known to fans as Star Wars Day, is a date to appreciate all things from a galaxy far, far away — and its origins have somewhat of a connection to British Prime Minister Margaret Thatcher, among other ties.

As fans know, "May the Fourth" sounds like the infamous line from the films, "May the force be with you." The phrase was often used by characters to wish individuals good luck in the face of impending danger — expressing that the Force work in their favor.

Over time, a celebration of the date by Star Wars fans has taken off around the world.

"It is a grassroots phenomenon that now transcends the English language pun that inspired it," the official Star Wars website explains.

‘May the Fourth’ origin story

Like many Star Wars characters, "May the Fourth Be With You" comes with an interesting origin story. The earliest use of the phrase was in 1978, one year after the release of "Star Wars: A New Hope," according to a post by Lucas Seastrom, a Lucasfilm historian, on the official website.

By that time, Star Wars had become firmly established in American popular culture. In the summer of ‘78, clever newspaper writers used the phrase as a gimmick to mark Independence Day celebrations on the Fourth of July, it said.

Another one of the earliest known references to the day followed the May 4, 1979, election of Thatcher as Britain’s prime minister, according to the official Star Wars website.

Thatcher’s party took out an ad in the London Evening News with the message, "May the Fourth Be With You, Maggie. Congratulations," the website states.

Other early uses of the phrase since have been documented, but the day really took off once the Internet began connecting fans. Many began choosing the day to hold themed Star Wars parties or host community events. Others simply used it as a time to rewatch the films.

From delicious recipes to new Star Wars content to stream -- here are some of the ways you can celebrate May the Fourth, known to fans as Star Wars Day.

"That belongs to the fans, along with the irresistible attraction of using the phrase to evoke laughter (or even an eye-roll) from bemused friends, relatives, colleagues, or even strangers on the street," Seastrom adds.

However, Lucasfilm has taken "a more active role" in the unofficial holiday in recent years, helping to sponsor and promote events, sharing ideas on how to celebrate and encouraging fans to share in their passion on social media with #MayThe4thBeWithYou and #StarWarsDay.

"The new films, series, books, comics, and games have done a great deal in fueling this surge of relevancy, but I can’t help but feel that the grassroots rise of Star Wars Day indicated that it was going to happen in some form anyway," Seastrom writes on the official website. "The timeless appeal of Star Wars matched with the passion of its fans is a guarantee."