Hijo del Soberano, which is the wrestler’s performance name, said he lost wages from canceled matches and any other opportunity to make a living while much of the world is on lockdown to slow the spread of the novel coronavirus that has devastated global economies.

TORREON, Mexico - A Mexican wrestler financially impacted by canceled wrestling matches due to the COVID-19 pandemic has dedicated his time to making “lucha libre” face masks to help others fight the virus.

RELATED: Matthew McConaughey shows you how to make a bandana mask

Known for their extravagant costumes and big personalities,  luchadores are commonly admired as heroes by their fans, and Hijo del Soberano, who lives in the city of Torreón, roughly 612 miles north of Mexico City, certainly lives up to the reputation — in and out of the ring.

Lucha libre is a popular form of wrestling in Mexico that features colorful masks, elaborate costumes and acrobatic techniques.

According to NPR, Hijo del Soberano, which is the wrestler’s performance name, said he lost wages from canceled matches and any other opportunity to make a living while much of the world is on lockdown to slow the spread of the novel coronavirus that has devastated global economies. 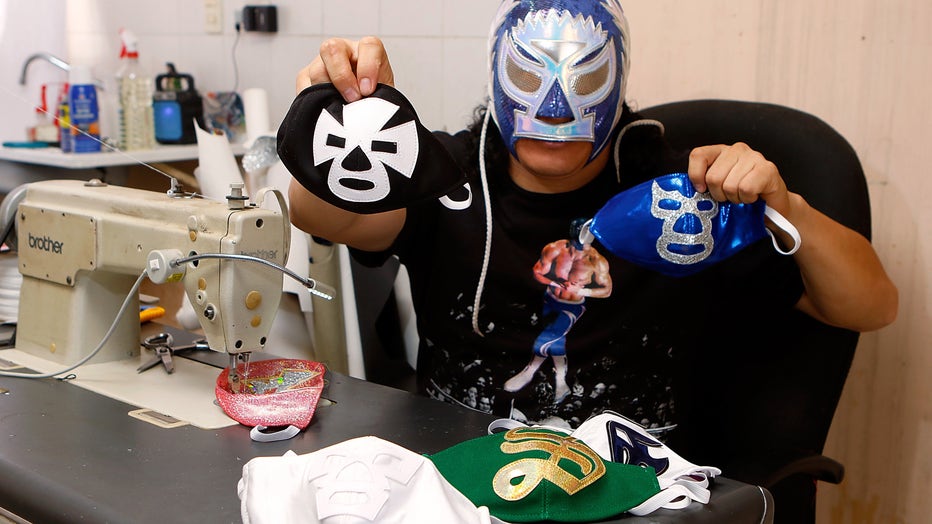 When the luchador isn’t wowing crowds during matches, he and his wife would normally be be selling handmade lucha libre costumes complete with the very familiar and flamboyant masks that Mexican wrestlers are known for.

Hijo del Soberano said that within weeks of Mexico’s lockdown orders, he needed to pay his bills, so he decided to turn his costuming efforts to making surgical-style masks in the same spirit of the colorful lucha libre masks.

He has posted a variety of designs and accepts orders through his Facebook page, and he told NPR that he’s sewing more than 200 masks per week as orders pour in.

Thousands of individuals and organizations have answered the call to produce homemade masks amid serious shortages of medical supplies during the COVID-19 pandemic.

The lack of critical supplies has resulted in the boom of an entirely new economy of individuals selling much-needed protective equipment such as face masks.

The CDC offers steps on how to make your own cloth face covering, regardless of whether or not you know how to sew.

Luckily for Hijo del Soberano, he and his wife have reportedly been able to take care of themselves financially with the masks they sell on Facebook.