Casey Lawhon spoke with FOX Television Stations about his mission to help give grieving families a unique and personalized sendoff for their loved ones lost.

GULFPORT, Miss. - When Casey Lawhon heard about the drowning death of a 2-year-old boy named Sawyer, he immediately related to the parents’ pain and knew he had a calling to fulfill.

The 25-year-old found out that the toddler loved Mickey Mouse and came up with a unique way to give the little boy a touching sendoff.

After obtaining permission from the parents, Lawhon wrapped and decorated the toddler’s casket with Mickey Mouse floating on a carpet in the clouds with the message "Never forgotten Little Sawyer" and "I love you Momma and Dad’ee." On the inside of the casket, you can see Mickey Mouse flying towards a cartoon version of Sawyer in heaven.

"I think it symbolized peace in a tragic event," Lawhon told FOX Television Stations. "I believe Sawyer is at rest and at peace."

Casey Lawhon decorated this casket for a 2-year-old boy who drowned.  (Casey Lawhon)

Lawhon launched In Memory Casket Wraps in February 2022 in Gulfport, Mississippi. He wraps, decorates and personalizes caskets for families who lost loved ones.

But he has a special heart for children who have died. To help cover those costs, he solicits donations from the community. For Sawyer’s casket, he was able to raise $700 in eight minutes. For another job, he raised $1,400 in 35 minutes.

"Just losing a child is so unexpected," he said.

For older clients, Lawhon would solicit donations at the request from grieving families.

A series of unfortunate events led Lawhon to perform this unique act of service.

For the past three years, Lawhon owned a vehicle-wrapping business in Mississippi. In January 2022, his 21-year-old sister Raelan died after taking an oxycodone pill that was unknowingly laced with fentanyl.

The loss devastated Lawhon, and he came up with a unique way to honor her. Using his skills from his vehicle wrapping shop, he wrapped her casket in pink flowers with a grey background

"That was the first casket I ever done," he continued. "I did it for her. I did not do this for anything else. Just for her." 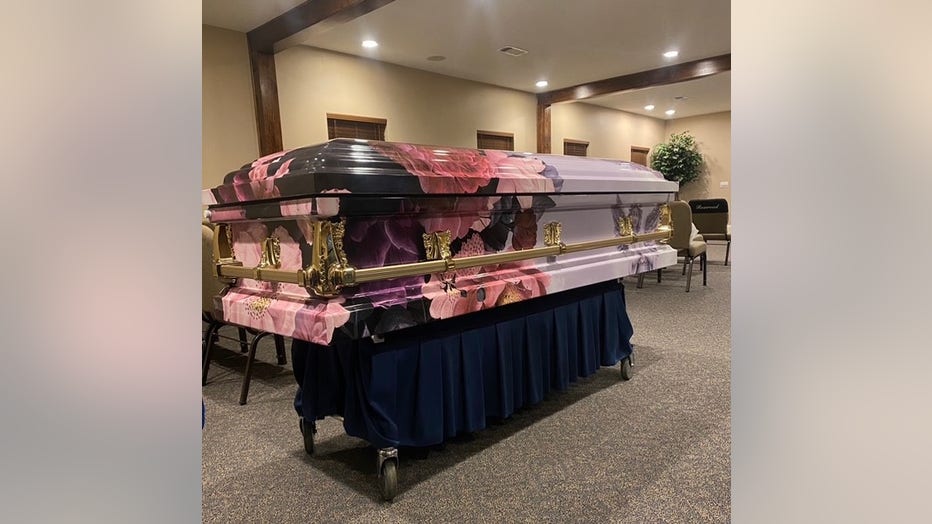 After his sister’s funeral, Lawhon was propositioned by funeral home owners to start his own casket-wrapping business. He was reluctant out of fear people would think he was doing it for the money.

But when the family of a deceased 18-month-old boy reached out to him for a casket wrap, Lawhon said his mission became clear and he started his business.

"I didn’t realize how much it meant to them," he added.

Lawhon said being surrounded by death can be taxing.

"It takes a toll," he continued but contended, "if I stop what I’m doing, it would just eat me up."

Lawhon said he continues the work in honor of his sister, finding a way for her memory to live.