Two San Francisco paramedics were left shaken up Monday morning after a man stole their ambulance and tried to run them over, authorities said. San Francisco police Deputy Chief Raj Vaswani said the incident happened at 6:50 a.m. in the 1700 block of Harrison.

SAN FRANCISCO - San Francisco police are searching for a suspect who attacked two paramedics as they were sitting in a parked ambulance Monday morning in the city's Mission district.

Lt. Jonathan Baxter, a spokesman with the San Francisco Fire Department called this an unprovoked attack.

"This is just one example of the violence our public servants see every day," said Baxter.

The EMTs were staging in the Best Buy parking lot on Harrison Street about 7a.m., when Baxter said someone approached holding a sharp wooden object.

"He basically came at them with a spear, and was jabbing and spearing through all the windows of the ambulance including doors in the side of the ambulance," said Baxter.

The paramedics feared for their lives and got out of the vehicle. That's when the suspect got behind the wheel.

"At that time," Baxter said, "the individual took possession of the ambulance and stole it and then tried to chase down or run over the paramedics that were running for safety."

Luckily, the paramedics were not physically hurt. The suspect took off right as police arrived.

Officials believe the weapon was a wooden stake used to support newly planted trees in the Best Buy parking lot.

"They are super lucky they did not get injured at all, much less significantly," said Tim Finch, the director of the San Francisco Firefighters Union 798. He said the paramedics are with Station 49. He said assaults are something they are seeing too often in their work.

"Whether it’s patients having a crisis and not understanding and becoming violent or just random people walking, by it’s definitely concerning," said Finch.

Firefighters are trained in deescalation and crisis communications.

Baxter said they are reevaluating their safety measures. "Both of the paramedics were physically not injured but both of them are going to have everlasting emotional and mental distress from this incident," said Baxter.

District 6 supervisor Matt Dorsey said called this attack alarming and a wakeup call. "We ask so much of first responders and we expect so much for them we should never expect this," he said.

Dorsey said the last few years crime in the city has been out of control and the city needs to do a better job.

"Whether this was a mental health issue or a drug issue or both we need to have better solutions about what we are doing for people who are acting out violently on the street," said Dorsey.

Police said the suspect drove laps in the Best Buy parking lot in the stolen ambulance, chasing the uniformed paramedics. He eventually abandoned the vehicle and was last seen scaling a fence at Treat/Florida Street. 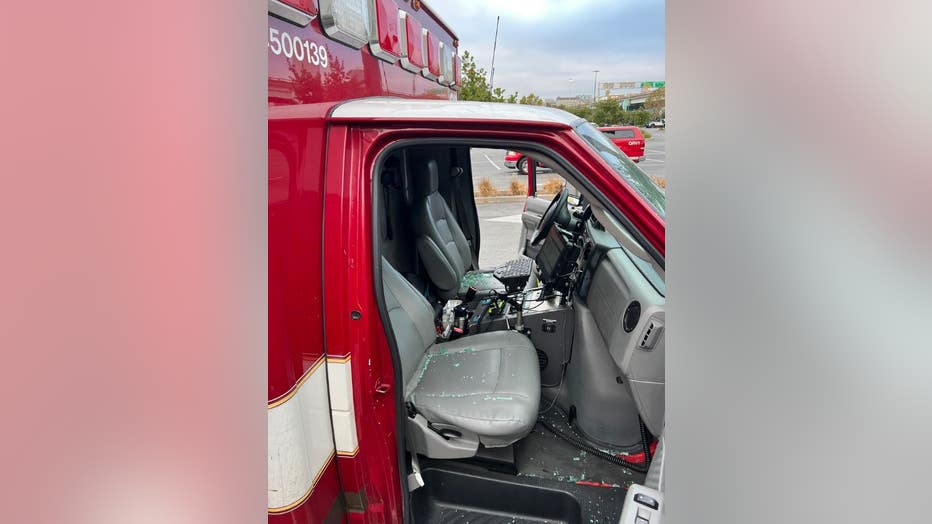