Man completes challenge to go from morbid to marathon

ORLANDO, Fla. - Each person in this sea full of runners has a story. But for Chris Hasty, Walt Disney World Marathon weekend was the final chapter in his two-year storybook. He has now officially made the transition from morbid to a marathon.

“I’ve never been so pleased and happy with myself,” said Christopher Hasty, who lives in Clermont.

FOX 35 News first shared Hasty’s story in November. He’s been using his Instagram account @morbid2marathon to document his massive weight loss and his training for Disney’s Dopey Challenge. It’s a series of races at Disney that includes a 5K, 10K, half marathon and full marathon run over four days. It’s a total of 48.6 miles.

He ran them all this weekend, and he has the medals to prove it.

“I’m really excited to do it again much to my wife’s dismay,” said Hasty.

Much of his extraordinary weight loss comes from running. He’s down 260 pounds in two years. But he says there were moments of doubt this weekend, especially when he cramped up at mile 16 of the marathon. “When I hit that wall, that was a tough spot. When I saw my buddy on the course, I had an emotional breakdown for a second.”

His friend captured the moment on his cell phone.

Hasty also had to run in a full body compression suit to keep his loose skin from all the weight loss in place. But he says it was all worth it. “I was one of those people. I used to look in the mirror. I hated myself and I never thought this was remotely something I could do.” 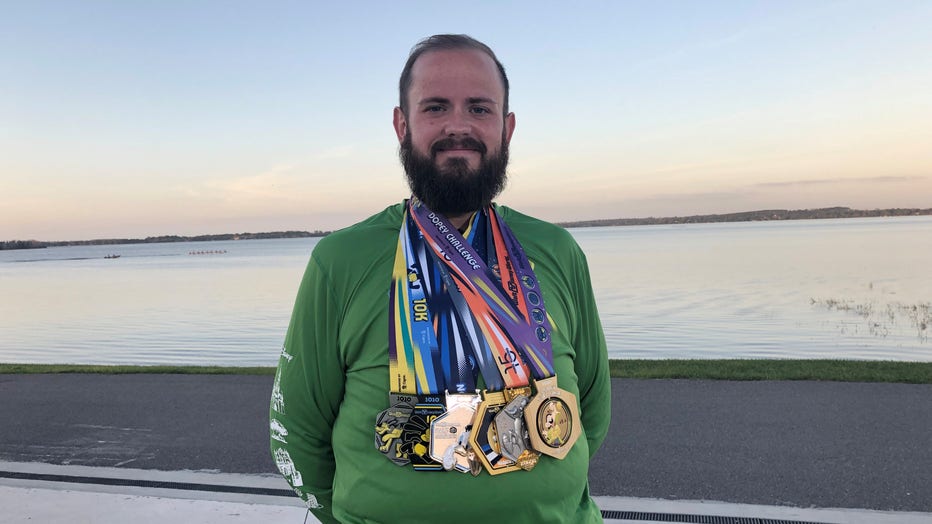 This weekend, he proved he could do it.

It’s his own personal fairytale with an ending full of happily ever after.

Hasty says he’s not done yet. He says his next goal is to do a Half Ironman, which includes a 1.2-mile swim, a 56-mile bike ride and running a half marathon, which is 13.1 miles.