Rob Parker joins NewsNOW from FOX to discuss the MLB All-Star game being moved from Georgia.

WASHINGTON (AP) - Democrats’ proposals to overhaul voting in the U.S. won solid -- although not overwhelming -- support from Americans in a new survey measuring the popularity of major pieces of the sweeping legislation in Congress.

The Associated Press-NORC Center for Public Affairs Research poll found about half of Americans support expanding access to early and mail voting, while about 3 in 10 opposed the ideas and the rest had no opinion. Automatic voter registration was the most popular Democratic proposal in the survey, endorsed by 60% of Americans.

Generally, the partisan divide was stark, as many Republicans opposed measures that make is easier to register and vote and most Democrats embraced them. About three-quarters of Democrats supported no-excuse voting by mail, for example, but about 6 in 10 Republicans were opposed.

There was one striking exception: Nearly three-quarters of all Americans — including majorities of both parties — said they support laws requiring voters to present photo identification, even as the Democratic proposal would ease those laws.

The sizable number of Americans who expressed no opinion on many of the measures suggests both parties have some room to try to sway public opinion as they ramp up efforts to pressure the Senate to act on the bill.

"When you ask questions that are focused specifically on voting, you can’t help but step into what is a super-charged debate that is still resonating coming off the 2020 election," said U.S. Rep. John Sarbanes, one of the lead sponsors of the Democrats’ bill. "There continues to be a lot of misinformation around what it means to have accurate and fair elections and voting in this country."

The 2020 presidential election was dominated by coronavirus pandemic-related voting changes and a flood of misinformation and false claims of voter fraud. There was no widespread election fraud, and those claims were rejected by Republican and Democratic election officials in state after state, by U.S. cybersecurity officials and by courts up to the U.S. Supreme Court. And then-Attorney General William Barr said there was no evidence of fraud that could change the election outcome.

Still, now there is a collective sense of urgency to change how elections are run. But each side is taking a dramatically different path, with state Republicans looking to tighten rules and Democrats in Congress seeking national voting standards. 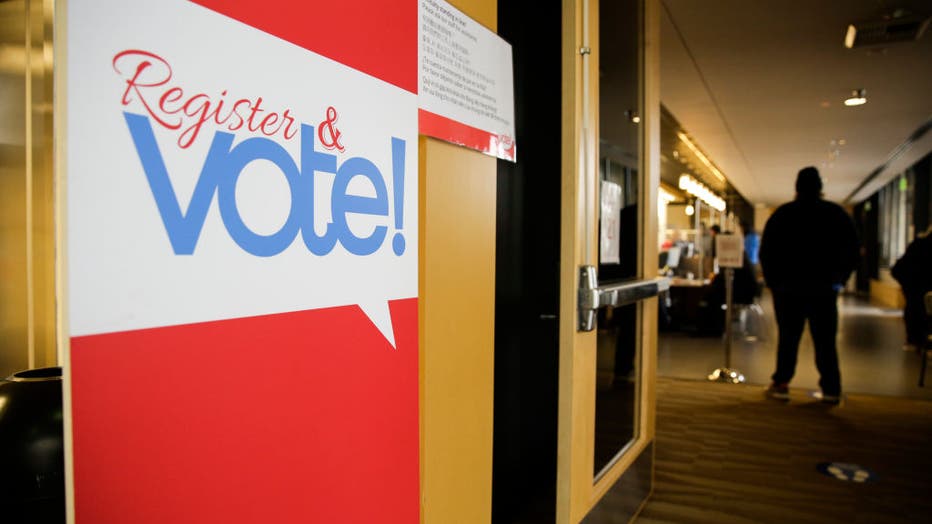 A sign for voter registration is pictured on Election Day at the King County Elections office in Renton, Washington on Nov. 3, 2020. (Photo by JASON REDMOND/AFP via Getty Images)

The two approaches reflect a partisan disagreement over the problem that needs solving. The AP-NORC poll shows a significant split over whether voter suppression or voter fraud is the more pressing concern. While 62% of Democrats say people who are eligible not being allowed to vote is a major problem, just 30% of Republicans do. Sixty-three percent of Republicans but just 19% of Democrats say people voting who are not eligible is a major problem.

Phil DiMenna, a 67-year-old retiree from Ashland, Ohio, who participated in the poll, said he did not think voter suppression or voter fraud were major problems, and he wished politicians of both parties would stop making voting so political.

"Put aside the party lines and do what’s best for the people of the United States," said DiMenna, who voted for Joe Biden in November. "There is always common ground somewhere."

The poll found bipartisan agreement on requiring all voters to provide photo identification at their polling place -- something that more than a dozen mostly Republican-led states have implemented. Not all these states have strict rules, though, and many allow voters to sign an affidavit if they don’t have their photo ID with them.

Overall, 72% are in favor of requiring voters to provide photo identification to vote, while just 13% are opposed. Ninety-one percent of Republicans and 56% of Democrats are in favor. The bill in Congress would require all states with an ID requirement to allow voters to sign a sworn statement under penalty of perjury and have their ballot counted.

The measure is one of several in Democrats’ legislation, which also includes various changes to campaign finance and ethics laws. The House approved its bill in early March, and a companion measure has had its first hearing in the Senate.

Final passage, however, depends on whether Democrats, who have a tie-breaking vote in the Senate, are willing to toss out legislative rules that currently require 60 votes for most bills to advance. Republican lawmakers are universally opposed to the voting overhaul, calling it a Democratic power grab and federal intrusion into states’ rights to administer elections.

Democrats are hoping to use the federal effort to thwart state proposals that would restrict access to the polls. The Brennan Center for Justice counts 360 voting restriction bills introduced this year. Five have already been enacted, and 29 others have passed at least one legislative chamber, the group says.

The AP-NORC poll suggests a strong base of support that voting advocates can build on, according to Wendy Weiser, who leads the democracy program at the Brennan Center.

"The two things that increase support are people learning more about the reforms and how they work and people experiencing those reforms in practice in their own communities," Weiser said.

This has been the case with Ann Cobb, a 56-year-old former customer service representative who lives in Calhoun, Georgia, where state lawmakers years earlier did away with requiring an excuse to vote absentee. She supports keeping it that way so long as voters show proof of identification.

"I think there are more opportunities for fraud with the mail-in voting, but I think if they can make you send in your driver’s license and identification then it should be OK," said Cobb, who voted for President Donald Trump in November but changed her party registration to independent after a pro-Trump mob's deadly Jan. 6 riot at the U.S. Capitol.

Georgia lawmakers have done just that, recently passing a bill that now requires absentee voters to include driver’s license information when requesting and returning mail ballots. And Republican lawmakers in Congress say that is how voting changes should be done -- at the state level.

"Each state has different election laws because each state is different," said U.S. Rep. Bryan Steil, a Republican from Wisconsin, at a recent congressional hearing. "At a time of real record voting turnout, I don’t think it’s time to be mandating a one-size-fits-all to our voting system."

Other elements of the Democratic bill would restore voting rights to felons and require same-day voter registration. The poll found 51% of Americans in favor of allowing a citizen who has completed a prison sentence for a felony to vote upon release, while 20% are opposed. Fifty-three percent of Americans say they support allowing citizens to register and vote on the same day at polling places, while 27% are opposed.

Democrats are more likely than Republicans to be in favor of both proposals.

The AP-NORC poll of 1,166 adults was conducted March 26-29 using a sample drawn from NORC’s probability-based AmeriSpeak Panel, which is designed to be representative of the U.S. population. The margin of sampling error for all respondents is plus or minus 3.6 percentage points.