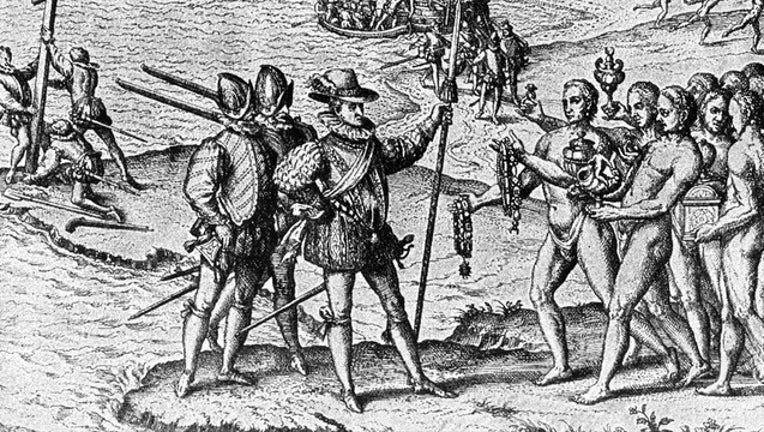 1492, Christopher Columbus (1446 - 1506) lands on Watling Island and meets the natives, while three of his shipmates erect a cross. (Photo by Hulton Archive/Getty Images)

AUGUSTA, Maine (AP) - Maine joined a small but growing number of states on Friday that have renamed Columbus Day to honor indigenous people as part of a movement to recognize the dark side of colonialism in the Americas.

Several cities and a handful of states have made some move to celebrate Native Americans on the federal holiday dedicated to the 15th century explorer Christopher Columbus, and the movement appears to be gaining momentum: Just this year, New Mexico's governor signed such a law, Vermont's effort awaits the governor's signature, and similar bills are pending in Kansas and Massachusetts. Maine's governor, Janet Mills, signed a law Friday to change the name of the October holiday to Indigenous Peoples' Day.

"There is power in a name and who we choose to honor," Mills said.

Native American tribes and others say celebrating the explorer ignores the effect that the European arrival in the Americas had on the native peoples, who suffered violence, disease, enslavement, racism and exploitation at the hands of the settlers.

South Dakota became the first state to replace Columbus Day with a day recognizing Native Americans in 1990, and the National Congress of American Indians and tribal leaders say they're now finding more support for the decades-old idea amid rising public awareness of those atrocities.

With Maine's move, there are now five states that permanently honor indigenous people instead on the federal holiday, according to a tally by The Associated Press, and governors in four other states regularly issue proclamations honoring Native Americans on Columbus Day. Few of those states previously recognized the federal Columbus Day holiday, which fewer than half of states recognize.

"We're at a point where indigenous people and other marginalized groups have been just trying to survive for so long," said Maulian Dana, tribal ambassador for the Penobscot Nation, who traveled to Maine's Statehouse for the signing ceremony Friday.

Now, she said: "We've been able to lift ourselves up a little bit and work with state and federal government to get to an elevated place."

Columbus is widely recognized as opening the Americas to European colonization, though he never set foot on what is now the continental U.S., says historian Jim Loewen, who wrote "Lies My Teacher Told Me: Everything Your American History Textbook Got Wrong."

Countries throughout the Americas mark his 1492 arrival in the Western Hemisphere, and Italian-American groups have long defended the holiday to celebrate their heritage and acknowledge the discrimination Italian immigrants faced.

"They should have a day of their own," Jim DiBiase of the Italian Heritage Center in Portland said of Native Americans, while acknowledging Columbus's legacy. "It shouldn't have to be on the shoulders of Columbus Day."

Some have sought compromise: This week, Oklahoma's Republican Gov. Kevin Stitt - the nation's first governor enrolled as a member of a Native American tribe - signed a law to dedicate the October holiday to both Columbus and indigenous people. At least four states honor Native Americans on another day.

Others have argued that erasing Columbus isn't the answer either, noting that the history of European colonization and its effect of the indigenous people needs to be taught.

"We're not going to forget about Columbus," Loewen said. "The question that people miss is: is there a difference between honoring and remembering?"