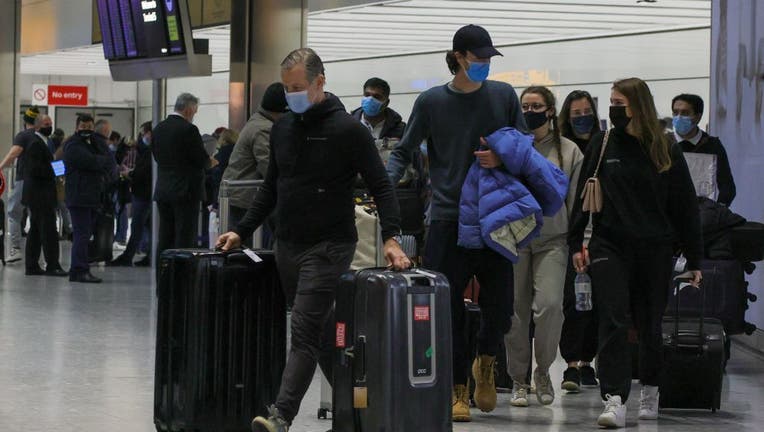 LONDON - Starting Wednesday, masks will no longer be required inside London’s Heathrow Airport including terminals, rail stations and office buildings.

Officials made the announcement Monday in a news release pointing to the success of COVID-19 vaccinations and society learning to live with the virus in the long term.

Masks will still be available for passengers who choose to wear them.

The move came after British Airways and Virgin Atlantic also dropped the mask requirements on their flights.

"In recognition that the pandemic is not over, Heathrow strongly encourages those at the airport to continue wearing a face covering – particularly when coming into close contact with others – although this will no longer be a firm requirement," airport officials said.

"The removal of the mandatory requirement reflects society’s move towards learning to live with COVID longer term," they continued.

Despite Heathrow’s move, masks will still be continued in U.S. airports and flights after the Transportation Security Administration extended the federal mask mandate through mid-April. The mask mandate was scheduled to expire March 18.

TSA said the extra month will give the U.S. Centers for Disease Control and Prevention time to develop new, more targeted policies that will consider the number of cases of COVID-19 nationally and in local communities, and the risk of new variants.

An American Airlines flight headed to Orange County, California, was forced to divert to Denver, Colorado, after a passenger allegedly attacked one of the flight attendants. The passenger, who reportedly punched the flight attendant in the nose, was arrested when the plane landed in Denver.

A decision to eventually scrap the mask requirement — one of the last vestiges of nationwide pandemic rules — has grown more likely in recent weeks as more states, even those led by Democratic governors, relaxed their own mandates for wearing masks indoors, and the CDC eased its recommendations.

The federal mask mandate was imposed in January 2021, days after President Joe Biden took office, and has been extended several times. The Trump administration had declined to require masks on public transportation, but airlines began requiring them in mid-2020 to reassure passengers worried about contracting the virus.

Meanwhile, after dropping nearly all coronavirus restrictions last month, Britain is now ending some of its most widespread COVID-19 testing and monitoring programs, a move some scientists fear will complicate efforts to track the virus and detect worrisome new variants.

Officials have largely dismissed those concerns, despite a recent uptick in cases across Europe, insisting that high immunization rates will help dampen future waves of disease.

Based on how quickly new variants have arisen, some experts suggest the next one could arrive as early as May. They warn that U.K. authorities should be using the time to prepare, rather than winding down their pandemic defenses.

As most COVID-19 restrictions are relaxed across Europe, including Austria, Britain, Denmark, Germany and France, the numbers of infections have inched higher in recent days. The uptick is driven in part by the slightly more infectious omicron descendant BA.2 and by people largely abandoning masks and gathering in bigger groups.

In the last two weeks, COVID-19 hospitalizations and deaths have both risen slightly in Britain.

British Health Secretary Sajid Javid described the increase as "expected" and the country as "in a very good position."

Numerous health leaders in the U.K. have questioned the wisdom of abandoning free testing and measures like stopping financial support for people with infections who are isolating.