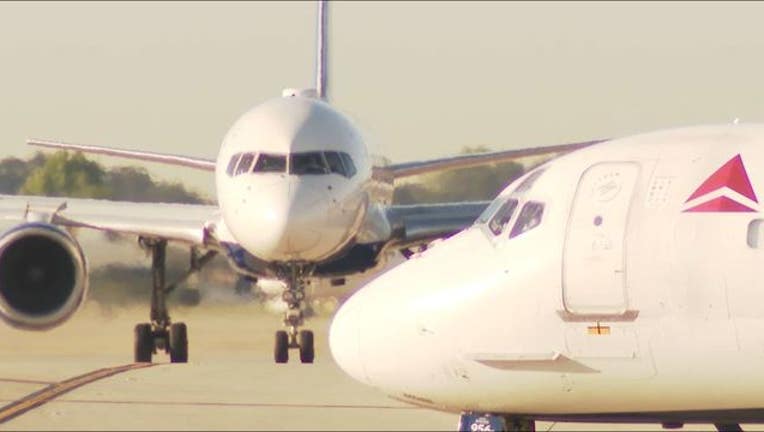 ATLANTA (FOX 5 Atlanta) - An Alabama man has filed a lawsuit against Delta Air Lines stemming from a June 2017 incident alleging a passenger's emotional support dog attacked him. The lawsuit claims the Atlanta-based airline “took no action to verify or document the behavioral training of the large animal,” such as assuring it could behave on an airplane.

The incident happened on a flight from Atlanta to San Diego. According to the lawsuit filed in Fulton County, Georgia court, Marlin Jackson, who was assigned the window seat, was sitting next to Ronald Mundy Jr. of North Carolina, who was assigned the middle seat. Jackson twice asked Mundy if the dog was vicious, both times being reassured he wasn't, according to the lawsuit.

The dog, described in a police report as a “chocolate lab pointer mix,” had growled at the Jackson before attacking him. The lawsuit said the dog was pulled away but was able to jump at Jackson a second time.

The lawsuit claims Jackson required 28 stitches, suffered permanent injury and scaring as well as a loss of feeling to the face.

Delta issued the following statement just after the 2017 incident:

"Prior to pushback of flight 1430, ATL-SAN, a passenger sustained a bite from another passenger's emotional support dog. The customer who was bitten was removed from the flight to receive medical attention. Local law enforcement cleared the dog, and the dog and its owner were re-accommodated on a later flight; the dog will fly in a kennel."

Jackson's attorney, Ross Massey, said the dog, according to Delta's own policy, should have been seated on the floor, not in his owner’s lap. He also said Delta needed to do more to verify these animals are trained.

"Delta put him in a seat, next to a large dangerous animal. They did that without checking if the dog was trained, without checking if the dog was restrained," Massey told FOX 5 Atlanta in 2017. "The dog viciously mauled Marlin for thirty seconds and repeatedly broke away when people tried to pull it back. There was so much blood on the plane that they had to change out three seats before they could put the plane back in use."

The airline has since declined any further comment to FOX News due to the pending litigation, but did issue a statement regarding the policy change for emotional support dogs:

"In 2018, Delta tightened its policies on emotional support animals by requiring a 'confirmation of animal training' form as well as other official documentation. The airline also banned pit bulls and animals under four months of age as service or support animals. These policy updates reinforce Delta’s core value of putting safety first, always."

Jackson is suing Delta and Mundy Jr. for damages, lost wages and medical expenses, as well as emotional pain and suffering. A dollar amount was not specified.

"Although we are aware that this incident has forced Delta to review and amend its policies, we are still seeking answers as to why the policies Delta had at the time regarding the animal’s size, accommodation, and placement were not enforced," a recent statement from Jackson's lawyer read.

Munday, who is a combat Marine veteran, was not immediately available for comment.